Looking at the Rays' Newfound FailPen

Share All sharing options for: Looking at the Rays' Newfound FailPen

The Rays have been dancing with dynamite all season long. Their bullpen was entirely rebuilt this past offseason, with the only returner being Andy Sonnanstine, and the results have been a big mixed bag so far. At the beginning of the season, the bullpen seemed okay on the outside; they posted a collective 2.94 ERA in March and April, leading many people to declare that bullpens are the easiest things in the world to piece together.

But if you sniffed around a bit deeper, you found that something smelled wrong. The bullpen may have posted an impressive ERA, but the peripheral statistics weren't as kind and suggested regression was ahead. And so far, that's exactly what's happened...plus some. 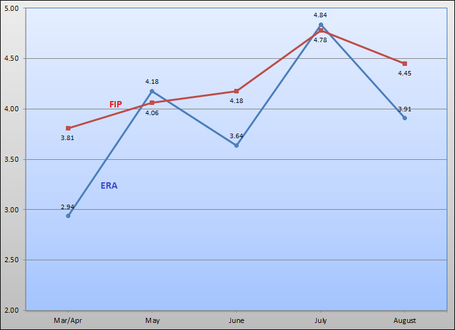 Over the last 30 days, the Rays' bullpen has posted a 4.84 ERA -- the worst in the majors -- and averaged over six walks per nine innings. Their peripheral stats have gotten worse and worse as the season has progressed, and as of right now, they look like one of the least reliable bullpens in the majors.

So who can the Rays trust in their bullpen right now? It's a short list. In the last month, Kyle Farnsworth has been as reliable as ever (1.93 ERA, 1.84 FIP), and Brandon Gomes has been excellent in extensive work (2.63 ERA, 2.87 FIP in 13 innings). Joel Peralta has managed to keep too many runs from scoring, but his walks are up and he's allowed a large number of home runs. And outside of this trio, the bullpen has been a mess.

Juan Cruz is striking out batters and limiting his walks, but he's also letting up hits and home runs at a wild rate. Jake McGee and J.P. Howell have had control issues, walking over six batters per nine each, and McGee has a home run problem on top of that. Heck, McGee has allowed a home run each of the last three times he's taken the mound. It's not a pretty sight.

With the bullpen being so rough, what can the Rays do going forward? Honestly, not much. They could promote a handful of players from Triple-A, but there aren't many exciting arms left down there; there's Dane De La Rosa, and that's about it. Their best bet at this point is to ride out this season with this collection of arms, and see what they have in each player. The end of this year is really going to be a learning exercise for 2012, so we know what we can expect from each player going forward.

Can McGee finally put everything together? Is J.P. Howell toast, or can he regain his form and help the Rays next season? Should we trust Juan Cruz enough to resign him this offseason? As bad as this bullpen has been, it still has so much potential. That's possibly the most frustrating thing about its recent struggles; we know these players all have the potential to be effective pitchers, and at their peak, this would be a dominant bullpen. But right now? We're not close to that point.

The Rays have had some incredible success in recent years in having all their bullpen arms work out. Balfour, Benoit, Howell, Choate, Wheeler -- all these pitchers vastly exceeded expectations. This season, though, the Rays have only had one or two pitchers that have lived up to expectations, with the vast majority of them putting up disappointing seasons. It's a reminder that all relief pitchers don't automatically meets their 90th percentile projection upon joining the Rays, and it's very difficult to predict how relievers will perform on a year to year basis.

Sometimes things just don't work out. It's been one of those years so far, but at least this group still has upside going toward 2012.