This Week In Sun Sports

Share All sharing options for: This Week In Sun Sports

A short week for Sun Sports broadcasts this week as the Saturday game was a FOX production and Sunday's game was rained out. Nevertheless, we've found a few gems amongst hidden in this week's games.

"They" say to leave the best for last, but I don't like "them." Who I do like is the man, the myth, the Magician, Casey Kotchman. Like his father, Merlin, it appears the Wizard of Old Tampa! (WOOT!) is ageless: 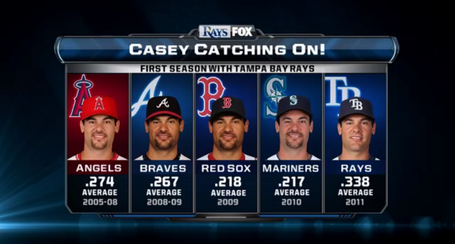 (If you want to see the Kotch-faces in action, click here.)

Maybe it's more than the eye-pus removing Lasik surgury that the Kotch-man underwent, maybe it was the (much-needed) goatee removal. Now that Kotch is goat-less, he's free to be clutch at the plate and hit game winning homers (like he did the night before). I realize that the Braves and Red Sox pictures are the same, but can anyone (with the exception of Luke Perry) make the same face for so many pictures? I'd be willing to bet that he's 197 years old, give or take a few millennia.

Seeds of Revolution, and some cartoon-defiance after the jump...

They say the seeds of revolution are planted in harsh times, back-alleys, and dimly-lit bars. For the Rays, however, I believe the seeds were planted in innings three and five in their battle against the Royals Wednesday evening.

Just to refresh your memory, this was the game where this happened: 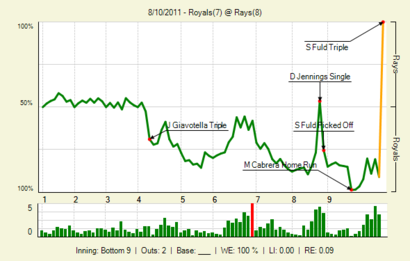 In the bottom of the third, Jim Hickey joined Staats and BA in the booth to talk about the pitching staff. Not to let an opportunity to harass go by, David Price joined in by pelting Hickey with seeds.

Price didn't stop there. In the top of the fifth inning, he assaulted James Shields, this time with the help of Kelly Shoppach. He didn't even try to hide it. 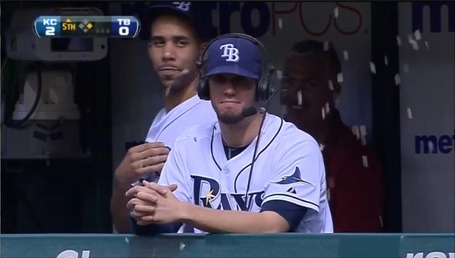 The boys would not let Price go unpunished, however and fought back in the bottom of the fifth:

Notice how Kelly Shoppach plays the turncoat on Price. He was clearly a double agent the entire time. Never trust a man with a lady's name, that's what old Jack Warner used to say.

As was noted above, the Rays came back against all odds in this rollercoaster of a game, and I believe the rally started right here when the players stood up and said,

"No! We will not take this abuse lying down. We will rise up and conquer our fears because the Price of standing idly by is TOO HIGH. No, sir. We will overcome this golaith named David and plant new seeds in the annals of history! We'd also like some more sunflower seeds, it appears we've run out."

This picture could really come from any day this week as it is a promotion for the Rays next Kids Day giveaway at the Trop. (h/t Steve Slowinski for the screencap) 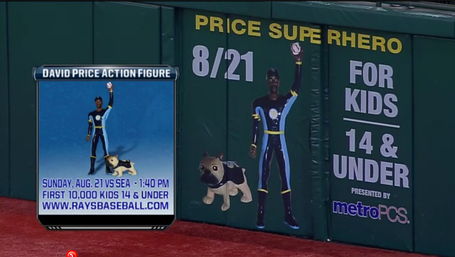 Superhero-Sidekick Astro (the dog) should be a great toy for the kids to play with, I'm just not so sure about Price. Steve Slowinski sent me this picture, but didn't make a comment, so I'm not exactly sure what he saw in it, but here's what I see: 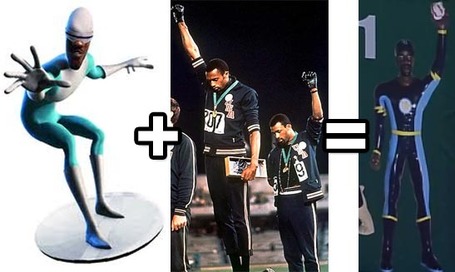 Pop Culture, History, and Sports all in one? Be still, my beating heart. I'm also getting flashes of an Eddie Murphy "Delirious" GI Joe joke in there somewhere.

Not much from Friday's game against the Yankees since the main attraction was the FIVE homers the Rays hit off of C.&C. Music Factory Sabathia. After the game, Kelly Shoppach met with Todd Kalas for a post-game interview and had this to say when Kalas asked him about the home run pitch: 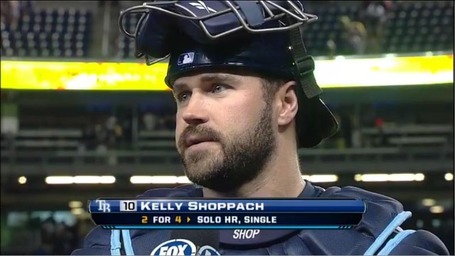 There was a little confusion on what the pitch was. I thought it was a fastball, but it was hard enough and up. I think the speed was 88 or so, but I'm not real sure. I just closed my eyes and swung real hard.

I know all you sabermatricians are aware that Shop is leading the league in Closed-Eyed, Real-Hard Swings [abbr: CERHS, or, - - ]. This often accompanies Bats Thrown Into Stands (abbr: AHHLOOKOUTTHERESABATFLYINGINTOTHESTANDS!).

I feel like Shoppach could be the next Gallagher. Every night, he could wow the Bay Area senior citizens by crushing watermelons and assorted fruits with his mighty hammer. But, watch out! Every time he swings that thing, there's a chance that grandma gets run over by a Reindeer Games-level of fail when the hammer flies from his hands and reinvents her skull as a distant-future archeologist's wet dream.

Anyhoo, that's it for this week. If you see something during a Rays broadcast and think it would fit here, please email us at ThisWeekInSS@gmail.com. Thanks to those of you who sent stuff in this week, we always appreciate the help. See you next week.