Since I penned my piece last week about Desmond Jennings being off to one of the hottest starts in Rays history, Deezy hasn't slowed down. He's currently riding a 7-game hit streak and has blasted two home runs over the last three games. The ball is rocketing off his bat, and he's already been worth 1.2 WAR despite the defensive stats not appreciating his defense yet. His introduction to the major has surpassed my wildest hopes and expectations, and he just keeps on going.

But as with all rookies, we know this insanity won't last forever. Pitchers will adjust as they get more familiar with Jennings, so we shouldn't expect him to continue to post a .303 Isolated Power and .640 Slugging. At some point, even if it's not until next season, Jennings will start to struggle and have to adjust to what pitchers are throwing him. I'm hoping that day will be long away, but we all know that eventually it's going to happen.

This line of thought got me thinking: how have pitchers been throwing Jennings so far? Are there any pitches he struggles against, or any noticeable holes in his plate approach? Are there any worrying signs in the Pitch F/x data? Well, not really.

Going into this, my assumption was that pitchers have been throwing Jennings a large amount of fastballs, as that's how pitchers typically work against new players. Rookies feast on the fastballs when they're first called up, but then struggle once pitchers figure out which off-speed pitch they have the most trouble with. It's a pretty common trend, but it doesn't seem to be the case with Jennings.

Pitchers appear to be throwing a whole range of pitches at Jennings so far:

I've lumped both two- and four-seam fastballs in under the "Fastballs" heading, and separated out the sinkers and cutters since it seems pitchers are throwing plenty of both. This is a much more varied repertoire than I expected; for example, Evan Longoria is seeing only slightly fewer fastballs than Jennings (2-3%, depending where you look) and is receiving around the same number of offspeed pitches. It appears that pitchers have already started respecting Jennings.

And even though Jennings is seeing all these different types of pitches, he hasn't struggled against any one pitch in particular. Check out this plot of his Whiffs (red marks) and Home runs (green): 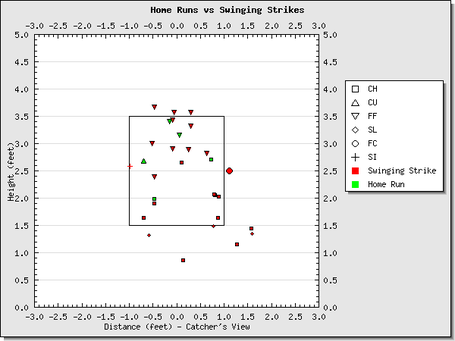 So far, he's swung and missed the most on high fastballs and low changeups, but he's also hit both pitches for home runs. He's also hit a curveball for a homer, and he hasn't swung and missed on sliders very often. Maybe I'm missing something, but I don't see any great weakness there. The cutter has been Jennings' worst pitch according to pitch type values, but that may also be a small sample size issue since it's the pitch he's seen the least often.

One last note: it does appear that Jennings is getting pitched inside quite often. The majority of his power has come on pulled balls -- he has a 1.100 Slg% on pulled hits, and hit four of his five home runs to left field -- so it's likely his power will drop off as pitchers start to work him outside more often. But even then, I'm not too worried because Jennings doesn't appear to be exclusively a pull hitter:

Jennings is a balanced hitter with an impressive approach at the plate. I'm having a tough time seeing any weaknesses for pitchers to attack, and judging from his continued hot streak, pitchers aren't having any better luck.