How do you fool Longoria?

Share All sharing options for: How do you fool Longoria?

A little while ago, Jason Hanselman wrote a visually striking, thought-provoking post in which he broke down Evan Longoria's swings by strike. If you missed it, go read the whole thing here. For those who have already read it, I'm borrowing his pictures. Here is the location of every pitch Longoria swung at this year with no strikes: 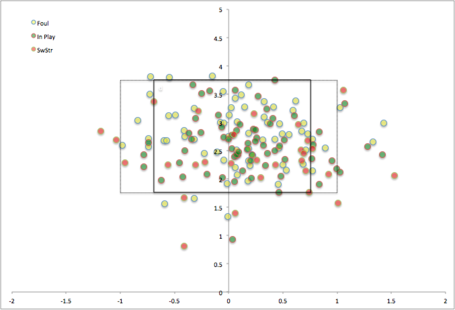 And here's everything he's swung at with one strike: 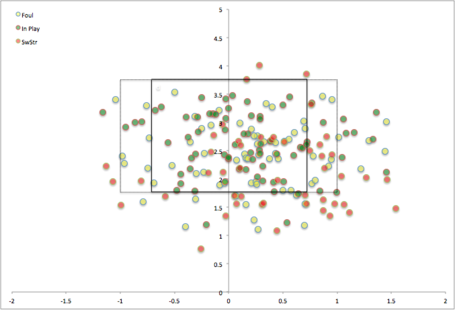 The two are glaringly different. With no strikes, Longoria rarely offers at anything below the zone, but with one strike, he swings and misses all the time. But why?

I don't think there's any reason to purposefully expand your zone as a batter once you get to one strike. That's something you do with two strikes, and in fact, Longo does—he swings more outside the zone with two strikes than he does with one, and he actually makes more contact on low pitches. What we're seeing here is Longoria being fooled. What all of those swings beneath the zone show is the clear and wonderfully isolated effect of successful pitch sequencing.

Before I start digging into these numbers, I think it's important to understand our data a little bit more. Rather than just look at the raw number of low pitches Longoria swung at, let's look it as a percentage of total low pitches he saw, to make sure we aren't seeing something that's merely a matter of volume. Also, I'd like to know something about the pitchers throwing him low pitches at each count, as a group.

As you can see, we were not being deceived by pitchers simply throwing more low pitches overall with one strike. Longoria offers at significantly more of what low pitches there are. Also, it's interesting to note that the group of pitchers throwing low balls to Longoria with one strike is actually better than the group of pitchers who do it with no strikes. They strike out more batters, walk less, and and have both lower ERAs and xFIPs. It's possible that this "one-strike group" is simply much more deceptive, but I'm willing to bet that at least part of that deception is due to their better sequencing (and hence doesn't invalidate this as a method of studying sequencing).

So, what's the difference between a zero-strike count and a one-strike count? A strike, of course! As an introduction to this concept, here's a look at every time that a low pitch was preceded by a called strike. I figured that if Longoria had already watched one go through the strikezone, he would be more eager to pounce on the following pitch.

The results are a little bit surprising. To qualify as "fooling" Longoria, a sequence needs to get him to swing at a low ball in a one-strike count more than he would overall. This season, in situations in which he had just had a looking strike called, Longoria actually offered at fewer low balls than he does in one-strike counts overall. If the called strike was two or more pitches before, though, he offered at a full 50% of low balls.

Does this mean anything? Maybe watching a strike go past does make Longoria more apt to swing at a low ball, but he counters the impulse for the pitch right afterwards by concentrating extra hard on the strikezone. Maybe the sample size is too small and all I'm seeing is noise. I'll continue to try and parse out effective and ineffective pitch sequences, both for Longoria and some other Rays batters. Let me know what y'all would be interested in seeing.