The Rays defeated the Mariners tonight to move a season high 12 games over .500 and five games over .500 at home. It wasn't the most exciting game ever, and took an inordinate amount of time (3:57:00) considering one team didn't score a run.

The game was essentially over in the first inning after Evan Longoria blasted a two run homer to left field. 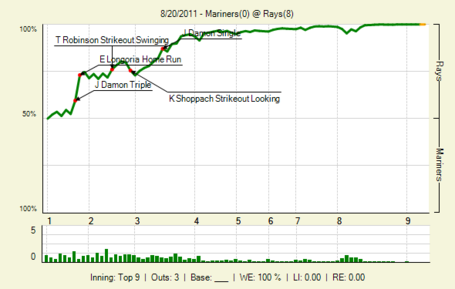 That would be all the offense the Rays needed as the Mariner's Triple-A-esk offense failed to score a run or mount much of a threat all night. The lineup, which had trouble with King Felix last night, was much better off Charlie Furbush. Every starter reached base at least once and the 1-4 hitters in the order went a combined 9-18 with three extra base hits. Leading the charge was Longoria. In addition to his home run in the first he also collected two more RBI on a single in the 8th. Desmond Jennings, though picking up just one hit, was able to swipe three bags tonight, giving him 13 in 26 games this season. It's going to be a joy watching him for a full season in 2012.

As for the pitching side of things, Jeremy Hellickson cruised through eight innings allowing six hits while walking one in eight innings. He could of very easily come out for the 9th since he was sitting at 103 pitches but Maddon decided to bring in Joel Peralta to close things out instead. He generated 13 swinging strikes tonight and had an 11 mile an hour difference from his fastball to his changeup. You're going to fool a lot of hitters when you do that with the type of stuff Hellickson has. He's loved pitching at home this season, posting a 3.65 FIP at the Trop compared with a 4.88 mark on the road. Tonight's effort (2.51 FIP) will help to lower that.

Tomorrow's game pits James Shields against the giant rookie Michael Pineda. Shields is coming off a complete game loss at Boston and Pineda has been hit hard in his last two starts. In his other start against the Rays this season Pineda struck out 10 in just 6.1 innings. Hopefully the Rays can get to him and pick up the series sweep.