You have to give it to the Rays marketing team. They've given out some dynamite promotions over the last few years, especially on Kids Sundays. Freebies like a Carlos Pena Silver Slugger Wiffle Ball bat, a Super Sam Fuld Cape, and, just today, a David Price Action figure with dog included. Not only are the giveaways special, the amenities at the Trop are something, too. A tank where kids can pet real Rays, kid-friendly concerts starring Avril Lavigne, and special for today, a rollercoaster. Of course, this wasn't a rollercoaster in the most traditional sense; this was a rollercoaster of raw emotion that might have been too much for the children's fragile psyches, but, hey, a rollercoaster is a rollercoaster, and -- as long as there's no death or maiming due to a horrific accident -- rollercoasters kick ass.

Despite the David Price superhero action figure giveaway this afternoon, Johnny Damon proved to be the real superhero, leading the Rays on two separate comebacks, the second being a walkoff homer to right. Damon was two for five on the day with a homer, double, four RBI and a stolen base. But, Damon's heroics didn't come until the seventh inning, and there was a lot of baseball beforehand.

James Shields is, of course, in the midst of an epic season. He's piled up great start after great start against the AL's best, which makes it all the more confusing as to why he's struggled so mightily against the woeful Mariners of Seattle. Juego G allowed seven runs in seven and one-third innings on twelve hits and a walk while striking out seven. He, as always, had some nasty stuff as he fooled the M's bats by generating 16 swinging strikes (14.55%), but ran into a trouble from the start thanks to a few hard hit balls that found holes and some mental mistakes. Shields was offspeed heavy this afternoon, throwing the fastball just 44 times of his 110 pitches. He was just about even with his change and curve, offering them 29 and 28 times, respectively.

Trouble found Shields right away as he allowed a few groundball singles in the first. It started when Shields wheeled to pick off Franklin Guttierez at second, but threw the ball to the ghost of Jason Bartlett because Reid Brignac made no move toward the bag. It appeared that Briggy missed a sign in there, but maybe Shields was a bit overzealous. The error moved the runners up to second and third and Mike Carp plated the M's first score with a RBI groundout to second. Shields was clearly fazed after that as he grooved a fastball that Casper Wells belted for a two-run bomb to make it 3-0, M's.

Jamie would allow at least two consecutive hits in each of the first four innings, and only escaped with just two more Mariners scoring thanks to some fine defensive plays.

Shields has allowed 15 runs (fourteen earned) in 11.1 innings against the M's this year. There's Something About Mary-ners, I suppose.

Comeback after the jump...

The Rays would scratch and claw back a few runs here and there, but really made a comeback push in the seventh inning. Tall-Drink-O-Water Michael Pineda was lifted after six innings and 94 pitches in favor of veteran reliever Jamey Wright. Things for Wright would go oh-so-wrong as he allowed a leadoff walk to Upton and a ground rule double to Joyce before John Jaso grounded out to second to plate the Bossman. Wright would then walk both pinch hitter Sam Fuld and Desmond Jennings to load the bases.

Jennings was trying to lay down the safety squeeze, but Wright wouldn't give him a pitch to bunt, so the young speedster took his walk. Wright would give way to Jeff Gray who faced Damon with the bases juiced. Damon would quickly work a three ball count before taking a strike to make it 3-1. Damon didn't take the next pich, however, as he sent a towering shot to right-center that bounced literally off the very top of the homerun line and came back into play. The umpiring crew initially called it a grand slam home run, but after review they deemed that it was to be a bases-clearing double. I thought DBullsfan had a decent take on this in the GDT:

that was a huge call and without replay would have taken a 5 minute group meeting by the umpires followed by both managers argueing, only to probably have the wrong ruling. They immediately went to replay and got every aspect of the call right in less than 5 minutes.

Well, not so much. James Shields would reemerge from the dugout to start the eighth inning, this time in line for the W. He allowed a Casper Wells single to lead off the frame and then retired Adam Kennedy on a popout, but it all came undone on a 1-2 curveball to Willy Mo Pena. The deuce had good break and just kissed the bottom of the strikezone, but Shields missed with the pitch in and Willy Mo showed why he's still on a Major League roster by crushing a line drive, murderball to the Captain Morgan deck for a two-run, game-tying homer.

The Rays would make it through the next innings unscathed and made a bid to take the lead back in the bottom of the eighth, but the gods deemed the eighth inning to not be worthy of a Rays comeback today. Reckless Mariner and conquistador Dan Cortes would walk Matt Joyce and then allow a single to Sean Rodriguez to give the Rays first and third with two outs and Desmond Jennings at the dish. Cortes unleashed a wild pitch that sent Jennings diving out of the way as the ball tumbled to the backstop and Joyce scampered home for the go ahead run. But, wait, the umpire ruled that Jennings was hit by the pitch so the play was dead and Damon came up with the bases loaded yet again. Cortes unleashed another wild pitch, this time a breakless, spinning curve that sailed unimpeded to the backstop. Joyce again broke for home, but the ball caromed perfectly and Cortes tagged Joyce out at the plate. Inning over.

The Rays didn't have to wait long for their revenge, however, as after a clean inning by Kyle Farnsworth, Johnny Damon stepped back to the plate against Cortes. Clearly the baseball gods deemed Cortes' escape of that eighth inning jam to be disrespectful, as Johnny Damon smacked a solo homer to right on the first pitch he saw to win the game in walk off fashion and complete the grand slam that replay stole away.

Tomorrow, Jeff Niemann and the Rays take on some guy named Justin Verlander at 7:10 PM. Rays pulled out a squeaker against King Felix the other day, maybe another one against Verlander is in the cards?

Just in case you forgot: 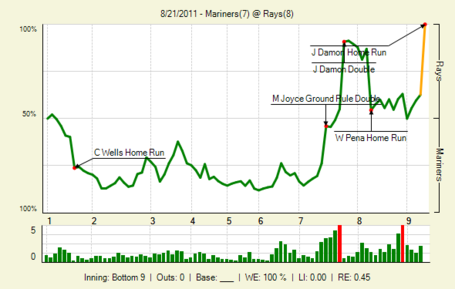