Welcome back to This Week in Sun Sports, kids. As always, we'll be looking at the oddities of the Rays broadcasts from this past week. Anything from the announcing, to a crazy video segment, to the fans in the stands. If it's on Sun Sports, we see it. Because--like your creepy neighbor in the bathrobe--we're always watching.

This week covers Tuesday, August 16th - Sunday, August 21st. If you missed last week's, you can find it here.

This shot comes from Game one of the double header against the Red Sox. Todd Kalas went hunting for a good time at Fenway and found it when he and his Superhero David Price Action Figure crashed this girl's tea party. 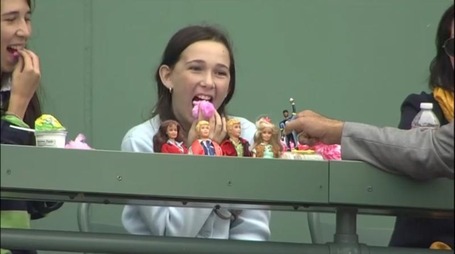 Kalas was, yet again, promoting the Price Action Figure giveaway and also brought along Action Figure Astro (Price's Dog). He left the girl with both toys as parting gifts, but Brian Anderson, of course, had some cause for concern:

As always, BA made things a bit awkward with that comment, and apparently the girl heard because this face came next: 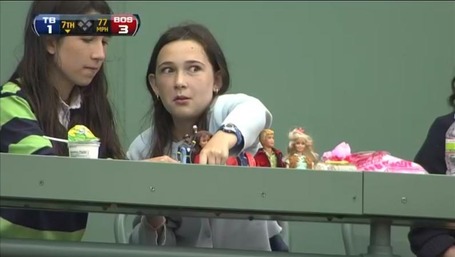 BA took a vacation for a few days after this. Was it a vacation, or perhaps a time out?

Cartoons, game faces, and face plants... after the jump...

In the top of the second, John Lacey turned up the intimidation factor against Desmond Jennings: 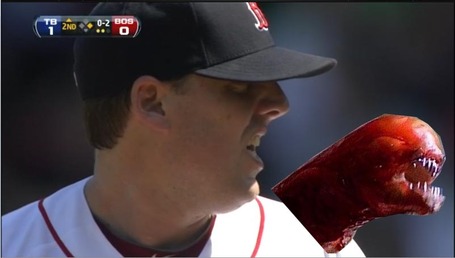 Now, you might recognize this as the typical Lackeyface, but he looks to me like the ChestBurster from Alien. Lackey would end up getting Jennings that AB, but the Rays would fight back against the LackeyBurster until he screamed, "That's it, man! Game over, man!" 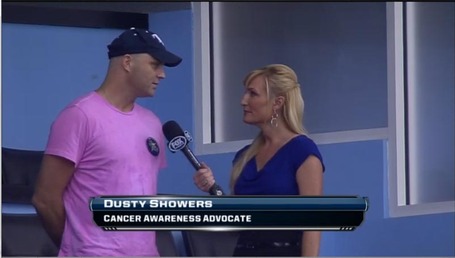 In all seriousness, this guy is a big leaguer when it comes to raising cancer awareness, specifically breast cancer (hence the pink shirt). He goes places just wearing a pink bra. Somehow he does this without being creepy, and that is an art all by itself. You can also book him to speak at your next cancer awareness raising event. If you're so interested, you can find his website at dustyshowers.socialgo.com.

Another Sunday, another Kids' Day at Tropicana Field. The David Price Action Figure was the give away (FINALLY), so that means we (hopefully) won't be seeing any more of that. Before the game, the players were asked what their favorite cartoon was. How is it that Johnny Damon never knows what he's supposed to say? On top of that., I think Reid Brignac has been spending a bit too much time with J.P. Howell.

Finally, we visit the moments after Johnny Damon's game-winning walkoff homer. After being interviewed and pudding'd-in-the-face, Johnny Nitro heads back to the clubhouse. All the fans are eager to get whatever Johnny will throw their way, especially the kid in the top-left corner:

Look at the little guy do whatever it takes to reach out those few extra inches. Thank goodness for those few spare pounds of "baby" fat to cushion his faceplant into the cold, hard concrete of the Rays dugout. Definitely aided in the quick recovery. Johnny appreciates the effort, however, as he tosses the kid his sweaty batting gloves that must be covered disgusting amounts of doo doo butter chocolate pudding.

Well, that's it for This Week. If you see something during the game that would fit "This Week in Sun Sports," please help us (me) out and tag it (#TWSS) in the GDT or email a description or screencap to ThisWeekInSS@gmail.com.

See you next week!