Share All sharing options for: Defeating Tigers Remains Out of Rays' Reach

Let's face it -- there was a thought in each of our heads that the Rays' paltry home offense matched up against the presumptive Cy Young winner in Justin Verlander had all the making of the Rays being shut out for the 13th time this season along with a potential no-hitter. Thankfully, Matt Joyce ended both possibilities in the first at bat of the game by hitting a lead-off home run making Joe Maddon look like a genius for putting Joyce in the leadoff spot despite the fact he has hit below .200 since June 1st with a sub-.600 OPS as well. Sadly, that and yet another home run by Evan Longoria in the 9th inning was all of the offense the recently hot-hitting team could put together in a 5-2 loss to the Tigers on a very stormy evening in St. Petersburg in which the loudest noises of the evening came from the hundreds of Lakeland area retirees who drove over to see their Tigers or the buzzing speakers in right field that took a direct lighting strike during a pre-game thunderstorm.

As good as Jeff Niemann has been in recent weeks, Justin Verlander has been essentially for the entire season. BHSN.com' J.B. Long did his usual appearance on MLB Network today and noted the Rays are 23-9 in their most recent matchups against Cy Young Award winners but that does not include the no-decision they gave Verlander back on May 24th when they put up six runs on Verlander but fell victim to a late home run by Alex Avila to take a loss. The game against Verlander tonight was the Rays' sixth matchup in their last nine games against a pitcher that has finished in the top five voting for a Cy Young Award in recent seasons including winners CC Sabathia, Felix Hernandez, and now Verlander.

Verlander went seven innings and 116 pitches on this night and his three fastest pitches of the night game within his final 15 tosses of the night. Overall , he threw 73 pitches for strikes and generated 17 swings and misses on the evening as he scattered two hits and three walks while striking out eight batters across seven innings after serving up the lead-off home run to MOM. Given the zone Ed Rapuano had behind the plate tonight, the outcome could have been much worse 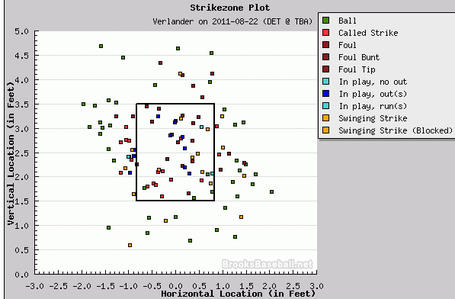 For the most part, Jeff Niemann was up to the task tonight as he made one mistake early in the game by giving up an opposite field home run to Alex Avila. For those not paying attention at home, Avila now has a .302/.397/.521 slash line on the season. His fWAR is higher than that of Prince Fielder, Mark Teixeira, Robinson Cano, and Kevin Youkilis but he is often overlooked by his larger and sometimes drunker teammate at first base. Essentially, Avila is as overlooked in the AL MVP discussion as Ben Zobrist; both players deserve to finish higher than they will.

After the early scoring, both pitches matched zeroes until the eighth inning when Niemann's command started to falter and he was chased after an intentional walk to Miguel Cabrera but not before allowing a double to  Delmon Young. On that opposite field double, B.J. Upton strained his throwing shoulder stretching out for the ball on the run. The good news is that it is not the shoulder he had surgery on but any time you have a swing as mechanical as Melvin's, any physical issue is not a good thing. The team says Upton is day to day so be prepared to see Sam Fuld in left-field while Desmond Jennings should give us a preview of what is to be next year in the field for at least a game or two.

Maddon brought in Jake McGee to face Alex Avila and this time, struck him out looking with a beautiful knee-high fastball before giving way to Juan Cruz. Cruz immediately gave up a two-run single to Jhonny Peralta who was 11 for his last 50 against Rays pitching. Cruz also gave up an insurance home run to the light-hitting Don Kelly in the 9th to make the game a non-save situation for Papa Grande Valverde in the ninth. Jose Valverde is a terrible pitcher in non-save situations and Longoria's lead-off home run got hopes up, but Joyce and Fuld were left stranded around a Jennings full-count strikeout and a John Jaso groundout to end the game.

Niemann's final line was 7.1 innings, allowing six hits, four runs, three walks, while striking out five and allowing just the one home run to Avila. He threw 112 pitches on the night, 67 for strikes, but got just five swings and misses tonight. He did his part until the very end, but the fact the 4-9 hitters in the offense were a collective 1 for 20 tonight did him no favors.

The Rays were off to a 3-0 start on their quest to win 28 of their last 40, so now must go 25-11 over their final 36 to get to the 94 win plateau that has been a requirement to get into the American League playoffs since the wildcard spot was brought into play. The Rangers being up 4-0 on the Red Sox takes a little sting off this loss, but not much. Tomorrow's matchup is David Price against Brad Penny, who presents a matchup problem for the Rays with his heavy groundball tendencies. The Rays are now 0-4 in their games against the Tigers in 2011 and is the only team the Rays have yet to beat this season.