Power Outage At The Trop Robs David Price Of The Win

Share All sharing options for: Power Outage At The Trop Robs David Price Of The Win

If I told you that the Rays posted 15 base runners, chased Brad Penny one out into the seventh inning, and got eight innings out of David Price who then turned it over to Kyle Farnsworth for the ninth, you would think that they had won. Nope. It's games like these that miracle late-season comebacks are not made of.

Price threw 115 pitches on the night, 82 of them (non-cut) fastballs, generating generating 8.5% swinging strikes on those pitches. As for secondary offerings, Price threw his changeup 22 times, generating 4 swinging strikes (18%), and his cutter nine times (though I think four other pitches were probably cut fastballs that didn't cut very much). He worked the outside part of the plate to right handed hitters with the backdoor cutter, and got either 3 or 5 called strikes out of it, depending on what classifications you believe. As his third pitch, the cutter is coming along nicely, although the runs Price gave up came when a frontdoor cutter to Alex Avila leaked too far back over the plate (pitch 4, Avila is left handed). 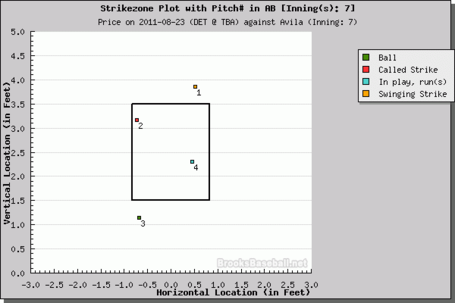 And really, that pitch is my only complaint with Price's performance. There are times when you try to trick a batter with your third best pitch (that you've only started throwing midway through this season), but a 1-2 count with the tying run on third isn't it. That's when you rear back and unleash 98 mph up above the zone.

Regardless, it was good to see Price regain his composure and mow down the Tigers in the eighth inning after being tagged for two runs in the seventh.