Share All sharing options for: The 2011 Shortstop Crap Heap

The Rays have had a shortstop problem this year. They started the season with Brignac manning the middle ground, but when his uppercut swing and moderately unfavorable luck produced an epicly bad, sub-.500 OPS, the Rays dropped him down to Durham and gave Sean Rodriguez and Elliot Johnson a shortstop timeshare.

Rodriguez proceeded to hit an unimpressive .222/.300/.343 slash -- not terrible for a shortstop, but not great, not up to the high expectations we had for Sean Rodriguez, and not really good enough to compete in the tough AL East.

Add in Elliot Johnson's sub-.600 OPS and we have a legitimate shortstop doo pile. 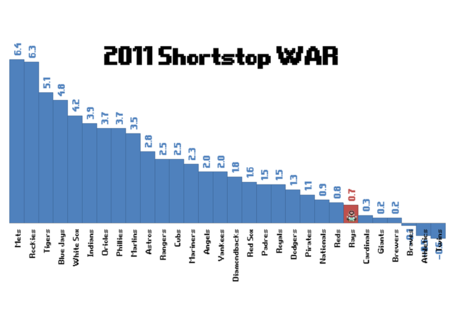 Defensively, the Rays shortstops have not been terrible: 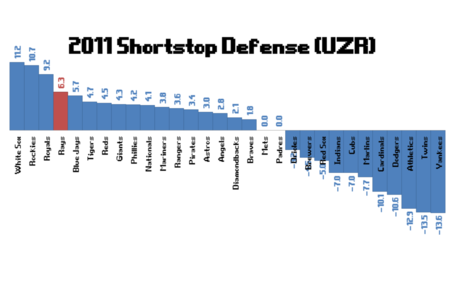 The problem starts and ends with the bats: 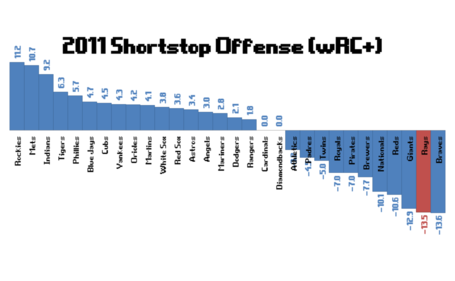 So, what's the solution? Well, part of the problem is that several of these guys are not playing at their true talent levels.

Since his return to the team, Reid Brignac has shown better defense and a more horizontal swing. Both things are very good signs, but still, he's a 25-year-old shortstop who has never hit more than 3% above average in Triple-A. It seems quite unlikely he is the long-term shortstop solution we need.

Meanwhile, Sean Rodriguez, who made Triple-A his prison wife in both 2009 and 2008, seems stuck at just under 100 wRC+ in the majors. Combined with his good and sometimes great defense, he appears about league average (2ish WAR). That makes him a solid, Ryan Theriot or Jason Bartlett-like contributor -- and a great platoon partner (151 wRC+ against lefties this year) -- so maybe he earns the everyday short next year.

The hope is, of course, that Rodriguez can live up to his minor league numbers next year, his age-27 season, and warrant some kind of extension (he'll be Arb 1 next year, so a trade may not be totally out of the question either).

The good news for the Rays: Unlike first base, the organizational depth at shortstop is plentiful. Tim Beckham has already made it to Triple-A and is sporting a brow-raising .288/.300/.576 slash through 60 plate appearances. He's a former top pick (#1 overall in 2008) out of high school and is less than 7 months into his drinking age.

Presumably, Beckham will start next season at Triple-A, where at age 22, he will be somewhere between 4 to 5 years younger than the his teammates and opponents. If he flourishes there -- which, for the Rays, may be just a .750 OPS -- and Rodriguez continues to be ho-hum, then I would not be surprised to see "Mr. Bust" platooning or starting full-time in blue and white.

Behind him, heating up in Double-A, the Rays have Hak-Ju Lee. Turning just 21 this November, Lee has all the makings of a shortstop who can hit, field, and run with the best. But until he reaches Durham, he's pretty far from contributing or being relevant to the present problem.

Of course, the Rays could look to fill their shortstop position from outside the team, but doing so would likely be expensive (either in money or in prospects) and could potentially create a logjam if Beckham and Lee mature more quickly than anticipated.

In short: 2011 has not been the year of the Rays shortstop, but, despite that, the organization does have a basket of talent at the position. The question is, what do they do moving forward?