Welcome back to This Week in Sun Sports, kids. As always, we'll be looking at the oddities of the Rays broadcasts from this past week. Anything from the announcing, to a crazy video segment, to the fans in the stands. If it's on Sun Sports, we see it. Because--like a certain horrible Keanu Reeves movie--we're always watching.

A new week brought the Detroit Tigers into town, this time with the old familiar face of Delmon Young wearing the Tiger grays. While it's always nice to see an old face (especially one who produced so much in his trade string wake), it was nicer still to see his brother, Dimitri Young in the stands. The keen-eyed Kalas found the Elder Young in the sixth inning looking a bit trimmer than usual. (h/t Whelk for spotting the slender Young) 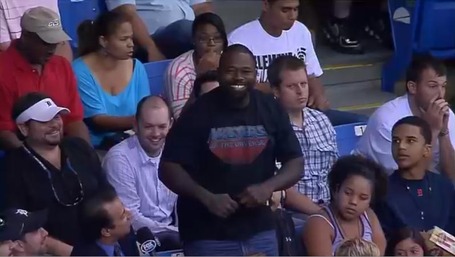 Dimitri also informed Todd of a good 'ol fashioned comeback tour. DMH is planning to head down to Venezuela to get the career back on track. If he somehow gets it together, me mentioned maybe he becomes a Ray. How have the Rays ranked in DH production over the last few years? Yeah, not the craziest idea I've ever had, is it?

With John Jaso's triumphant return, came a return to simpler times as well. To a time where facial hair ruled the land and a man could go as far as the wind on his whiskers would take him. The fine team at Sun Sports likened Jaso's face-forest to General Ambrose Burnsides and gave us a side-by-side: 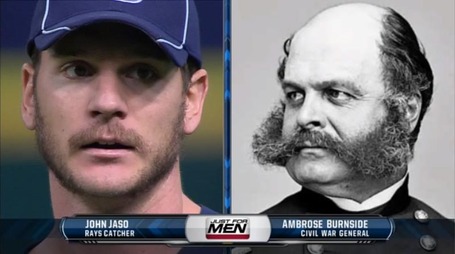 Normally, I'd be reaping praise on the fine Sun Sporters for this segment, but this time I have to put on my 'disappointed hat' because Fangraphs/Notgraphs/CubStats/SBNTampaBay and, oh yeah, DRaysBay writer, Bradley Woodrum came across this first. While Woody went with the less obvious comparisons to Kansas governor Nehemiah Green and Austrian monarch Franz Josef, he went there first and thus a hat must be tipped to him. (h/t Woodrum)

I will say that if there were ever a shot to be the 'Just for Men: Keep your Edge Moment' that this is a pretty good one.

Unlike this next one... after the jump.

Today is a doozy. And, of course, it mostly involves David Price.

But first we start off with Todd Kalas. 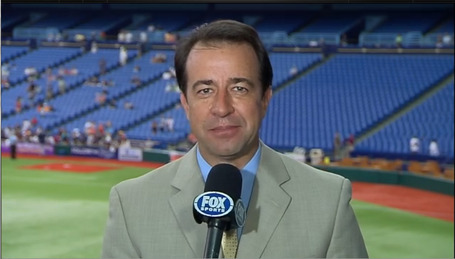 Whether it's 105 in the shade in Texas, or snowing in Baltimore, Todd Kalas always keeps it looking like it's the crisp, cool 72 at the Trop. Today at the Trop, however, Kalas was sweating like a guy who sweats a lot. Maybe the AC went out? Maybe TK was running wind sprints? Either way, I'm assuming that's not actually sweat and, in fact, is proof that this guy just oozes talent. (h/t FreeZo)

After the David Price and Astro Superhero Action Figure Giveaway Spectacular last week, I thought we'd seen the last of these creepy toys, but oh no, toy-Astro came back with vengence.

In the fourth inning Price was seen giving a bath to Astro with the water cooler. Tom "Dave" Foley took exception to this and knocked Price upside the head:

Maybe he was concussed, or maybe he has a closer relationship with Astro than previously thought, but I'm not so sure Price should be doing this: 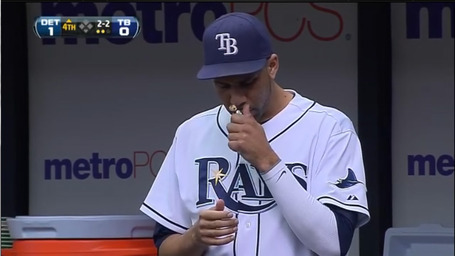 Not sure what end he's smelling there, but I can't imagine it smells good.

Price even got starter Jeremy Hellickson in on the Astro Love:

Here's where things get interesting, though. The next inning, Price must have taken a break to grab some more seeds, because this happened: 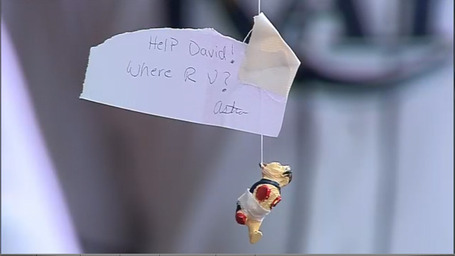 Oh, boy. What was a simple bathing, smelling and high fiving, turned into this? I mean, who does that? If you ever wanted to know when the 2011 Rays 'Jumped the Shark' or as I'm now calling it 'Hanged the Dog,' it was right here. In the GDT we were discussing acronyms for such an event. At first, I thought PETA and SPCA were apt, because I expect them to call for an end to plastic animal cruelty (as if making a dog wear a cape is OK). But, in the end, the letters WTF are the most fitting. Seriously, who does that?

Thanks to reader Nancy Blais (h/t), however, we discovered that Astro was OK after all. Can't tell if he's still maimed, but he did scare the heck out of Jim Hickey:

We finish off this week with another hat tip or sorts. This one goes to Casey Kotchman. Although we don't generally do on the field shenanigans, Kotchman's Jeter-esque hit by pitch in Sunday's game was a thing of beauty. 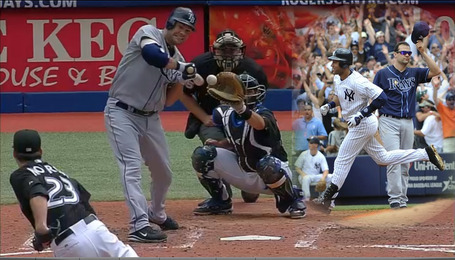 We know Kotchman has all the respect in the world for Jeter, and if he keeps playing the game this way, he might just make it to 3,000 hits (by pitches).

Well, that's it for This Week in Sun Sports. Thanks again to all of you who helped by pointing out the funny this week. If you see something during the game that would fit "This Week in Sun Sports," please help us (me) out and tag it (#TWSS) in the GDT or email a description or screencap to ThisWeekInSS@gmail.com.