He gets no respect, I tell ya, no respect. Someone raised a glass to Zobrist on his birthday back in May as "the best baseball player in the room," and a sportswriter asked when Derek Jeter arrived. Rumor has it that in 2006, Tim Purpura agreed to trade Mitch Talbot to the Devil Rays for Aubrey Huff but only on the condition Andrew Friedman accepted Zobrist in the trade. This season, the MVP discussions are taking place on the airwaves and the series of tubes in the Interwebs, yet the player that is arguably the Most Valuable Player of the Rays roster can draw nothing more than an "honorable mention" in discussions.

Yes, I am one of those dunderheads that pay attention to down-balloting in these races only because it always comes up when these players come up for Hall of Fame consideration. Someone will invariably say Jim Thome only finished higher than 5th in the MVP balloting once in his entire career while overlooking the writers that voted him SEVENTH the season he lead the league in OPS and finished just 0.1 win behind Alex Rodriguez in bWAR. No, Ben Zobrist is not going into the Hall of Fame, but I dislike the subjective process that the balloting remains for many people. Keith Law and Will Carroll caught a lot of flak for their ballots in 2009, but at least they had an objective process since the BBWWA does not set any kind of firm guidelines out there. The lack of leadership by the BBWWA on this matter leads to comments like this from SI's Jon Heyman:

@chrisrod13 to me most valuable in the league means winning. its not of great value to lose

Bautista not winning AL MVP because of the team he plays on is like blaming a child for being born into poverty, which America is great at.

The award is not called Most Valuable Player On a Winning Team Award, it's called the Most Valuable Player award. My angst today comes from Heyman's piece on the post-season awards today. I loved the fact he had Alex Avila in his top ten because the kid absolutely deserves that kind of attention for his amazing season, but two particular parts of his MVP ballot bugged me - Michael Young 7th and David Ortiz 10th - since both have played more than 60 games in the DH role this season. Nevermind the fact that Zobrist has a higher wOBA than Young this season; Zobrist simply got an honorable mention in the article.

It is not like we do not have metrics out there that can value a player, even if those metrics go about it differently. One of my employers, Baseball Prospectus, uses Wins Above Replacement Player (WARP), FanGraphs has their own version of WAR (fWAR) and Baseball-Reference has theirs as well (bWAR). Those metrics cannot measure the intangible factors such as how a guy's bat or arm made the rest of the team better, but they do an excellent job of showing a player's statistical value on an even playing field. It cannot judge how Justin Verlander or James Shields working deep into nearly every game saves the bullpen for other games, but it can show us how much their statistical contributions are against their peers. Since WARP, fWAR, and bWAR all have their own methods for constructing their final value, I thought it would be helpful to show an average of all three scores in examining the best players in the American League.

Since I am a company man, I took the top 32 players from Baseball Prospectus' WARP report for the season and found the fWAR and bWAR values for those players on FanGraphs and Baseball-Reference and averaged them out to get an aWAR (average WAR) score for each player. The results: 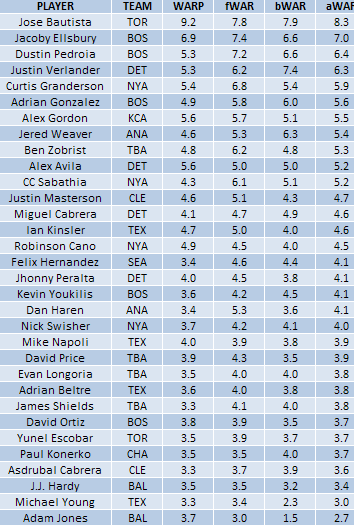 Not only is Zobrist in the top ten here, all three of his value metric totals are also in the top ten. Simply put, Ben Zobrist is more than just an honorable mention in the American League Most Valuable Player Discussion, he should be a real player in the top ten discussion. That said, I am going to go out on a limb and say he will finish lower in the final standings than Jose Valverde if the Tigers win the American League Central and that may not be his only slight at the hands of a closer this post-season.