The original form of this recap comes courtesy of SBN Tampa Bay, your source for all things Tampa Bay.

The Tampa Bay Rays (73-60) could not complete the four game sweep today, falling to the Toronto Blue Jays in a 7-3 bout. Wade Davis (L, 8-8) started for the Rays, but could not finish the fifth frame in what turned out to be his second shortest outing of the season.

The game started out well enough for the Rays: A lead-off walk for Desmond Jennings turned into a two-run home run for Johnny Damon. Unfortunately, the 2-0 lead became a 3-2 deficit in the third inning, and by that point, it was becoming painfully plain that Davis did not have his good pitches or good fortunes at the ready.

The third started with an expedient swinging strike out of DeWayne Wise, but Yunel Escobar singled and Eric Thames (pronounced like an American would want to: thhhhh-aims) doubled. Jose Bautista, Destroyer of Worlds, then came to the plate and amazingly and mercifully only grounded out, putting the Jays on the board, but down 2-1.

Then Adam Lind, who looked at times goofy and lost during the at bat, worked a 2-2 count and then blasted a homer to deep right-center. At this point, the floodgates opened. The Jays scored over each of the following three innings, building their consummate 7-3 lead by the bottom of the 6th. 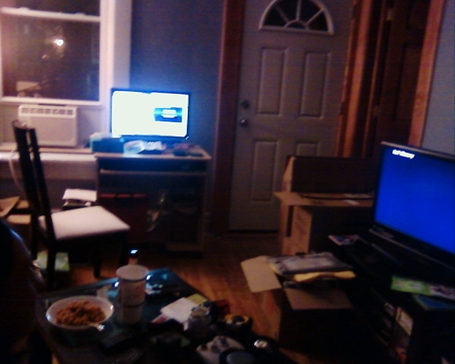 Yeah, that's right. What you see there is a computer broadcasting the game (left) whilst the television begins the DVD (right). Not pictured is my wife, quietly enduring her decision to marry me.