With a little over a month left in the season the Rays are one of the more interesting teams in baseball. They're good, but not good enough given the division they play in. As usual they're loaded with many interesting players, situations, and decisions. Instead of focusing on just one topic for today's edition of Deep Thoughts, R.J. Anderson (of Baseball Prospectus fame) and I will touch on a variety of things floating around the Rays universe at the moment.

Erik: At the All-Star break Kyle Farnsworth was picked as the team's MVP by local media members. You and I didn't agree with that assessment then and doubt we're going to like what the result will be at the end of the season. It would be similar to Bartlett winning in 2008. Let's talk about justifying that selection.

R.J.: I think you have to answer these two questions:

Erik: Well, if I wanted to I could try and make a case for Farnsworth as team MVP. I'm not sure how compelling of an argument it would be, though. As for Peralta...no, no I don't think I could consider that. I'm assuming you're going to tell me how, though.

R.J.: Not exactly, because I think the answer to both is no, but for the sake of entertainment, what mainstream attributes does Farnsworth have that Peralta does not? By my count, Farnsworth has a) a better earned run average, b) better peripherals, c) more saves, and d) the closer label. How people weigh those things is dependent on personal taste, but I would say that at least half of those reasons are mostly bunk.

For instance, Farnsworth does have more saves than Peralta, there's no way around that, but is it really appropriate to give the pitcher full value for being the guy who pitches the ninth instead of the eighth? Doubtful, which is why--even if you use saves as a value metric (and you shouldn't)--I like how Baseball-Reference tracks save opportunities as well as save situations--the former is only in the ninth inning, the latter is the seventh-through-ninth. Going by that, Farnsworth has blown four of his 26 opportunities (which is also his situations rate), while Peralta has blown just two of his 20 situations. Peralta, therefore, actually has blown a lower rate of save situations. He's well behind in saves, but he rarely has the chance to record a save because he isn't often called into the game during the ninth inning.

Tell me, who do you think has entered more often in close games--Peralta or Farnsworth?

Erik:  My guess would be Peralta because he works in the 7th or 8th most of the time, and since the Rays offense aren't world beaters they're likely going to play more close games.

R.J.: Yup, and that's the kicker. Once you strip away the saves and look beyond the label, you'll realize that it's Peralta with a higher percentage of his appearances coming in the tied, one-, and two-run games rather than Farnsworth. It takes until the three-run or less game split in the chart below before Farnsworth exceeds Peralta, and even then, it's closer than you may expect: 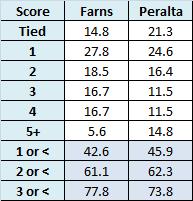 So if Farnsworth isn't saving games at a higher rate, necessarily, he isn't pitching on zero days rest or going multiple innings more often, and he isn't entering a higher rate of close games. It comes down to his ERA advantage--which is equal to eight runs over 50 innings pitched. Farnsworth is the better pitcher, no doubt, and he is having the better seasons, but the truth of the matter is that he isn't that much better of a MVP candidate than Peralta, and that should tell you all you need to know about the merits of his candidacy.

Erik: Agreed. And I think we can all agree that Davey Martinez's beard has been the team's MVP anyway. Let's talk about Sam Fuld. He's had a strange season to say the least. April, June and August = Good, May and July = Bad. Is that the life of a platoon player who doesn't see the plate appearances to collect a big enough sample? Or, is he, yanno, bad?

R.J.: Something I wonder about with Fuld is how his diabetes can wreak havoc on his physical health. I'd imagine that plays up a lot more over the day-to-day grind of being a starter, so it's interesting that the timeline you mention sort of follows a pattern. If you split his season up into two halves--pre-Justin Ruggiano and post-Ruggiano, or before and after May 20--you'll see what I'm sort of getting around to hinting at:

Maybe it's just me, but the post-Ruggiano split looks to me like a line that fits Fuld's game. Perhaps I'm just falling into a narrative and arbitrary endpoints because I like Fuld--from his skill set to his initiative in turning his 15 minutes of fame into a diabetes awareness campaign--but it isn't impossible to think his diabetes might affect him as an everyday player more so than when he appears every few days to give one of the outfielders a breather, which is fine, because that's the role he's likely to play during his duration in a Rays uniform.

Erik: And how long do you expect that duration to be? The way it sits right now it seems the Rays will probably have a 2012 outfield of ? in left field, Jennings in center and Joyce in right. The question mark will probably be filled with Guyer, or some yet to be named free agent. Do you think Fuld sticks around as a defensive replacement/sometimes platoon player?

R.J.: I think he fits the 2012 roster, assuming nothing big changes in the outfield. The beauty of Fuld is that he can do some things that others on the depth chart can't--you aren't going to ask Ruggiano to pinch-run or play center field in the best-case scenario. I also think Fuld fits even if the team decides they still want to platoon Joyce or Guyer--although there is a school of thought that he could be an everyday player--because of his versatility and because of his cost. Plus, the guy is gold off of the field. It's like the Rays designed the perfect nondescript player on the field who has grade-80 everything away from it, right down to his grandiose Wikipedia page. Even with the dwarfism (and the media's infatuation with it), I find it difficult to harbor a snarky thought about Fuld anymore.

Erik: Last one, and we'll make it a quick hitter.Who would like to see the Rays call up when the rosters expand? Matt Moore would be a treat to watch, but I think there's little chance of that happening. Guyer and Canzler would be the only two I'm especially interested in.

R.J.: Canzler (he has to be added to the 40-man before this winter anyways, may as well get a sneak peek on whether he's just a bench guy or not), Guyer, Chirinos, and maybe a pen arm or two for sure. Otherwise, I'm prone to appeal to authority on player development matters, so if they don't think Moore or Chris Archer are ready, who am I to say otherwise?

I was thinking about this a few days ago: Why is it that Tampa Bay's promotions over the last few years have performed so much better out of the gates (and arguably over their entire careers) than say, Kansas City's? Is it a skill, luck, some of both? I guess is it a matter of letting a player develop a little longer than needed in the minors versus trying to promote them as soon as they're ready. Given the fiscal restrains on this organization they're going to pursue the former route anyways, but maybe there are benefits to that lifestyle regardless.