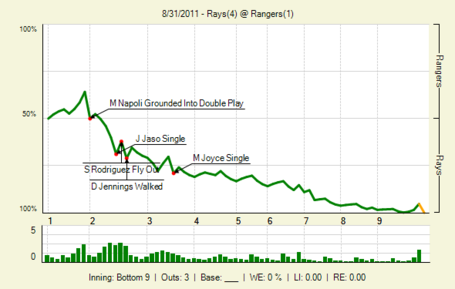 The James Shields Redemption Tour 2011 has been a thing of beauty. He likely won't get much love in the Cy Young race unless he goes totally bananas over his last few starts, but the numbers he's put up are so impressive considering the season he had a year ago. Tonight, R.J. Anderson tweeted that he was almost proud of Shields' performance this year, and I'd have to agree. When you take into account the drubbing he took last season, from opposing teams and local media alike, the results are even more impressive. Tonight was yet another example of Shields' brilliance this season.

He didn't get a chance to complete this Major League leading 11th game, but for eight innings you couldn't ask for much more. The first inning didn't start as well as Shields would have hoped as he allowed two singles and a walk to load the bases with one out. Luckily he got Mike Napoli to ground into an inning ending double play. The Rangers would pick up just two more base runners off Shields. At one point he retired 15 straight and 21 of 22 he faced. He attacked the Rangers with a good mix of pitches, throwing his four seam fastball 35 times, changeup 33 times, cutter 28 times and curveball 14 times. His most effective pitch was the cutter, which he threw for over 70 percent strikes. Though you could argue that his changeup that generated nine swining strikes, but with a lower overall strike percentage, was better.

In any case Shields was masterful. The Rangers offense is very good and he made them look like fools. He's gone at least seven innings in six straight starts and has allowed 12 earned runs total over that time, with seven coming in one game. In terms of WAR, Price was having a better season coming into this game. And while Price may very well finish ahead of Shields in the WAR rankings, Shields has been far more joyous to watch simply for the redemptive value most of us get in watching him. Kudos, Juego G.

On the offensive side of things the Rays weren't lead by any one player. No one had multiple hits or multiple RBI. If someone had to be chosen I guess it would be Johnny Damon, who reached base twice, stole a base, and hit his 14th home run of the season.

Kyle Farnsworth came on in relief of Shields to begin the 9th, and while he finished the game he looked shaky in doing so. Maybe that's what happens when someone has had some elbow soreness and hasn't pitched in eight days. Hopefully his appearances going forward will be less anxiety riddled for the viewer.