Back in early April, Steve gave everyone plenty of social media avenues to stay in touch with the Rays. Before that, I did a story on the Rays' social media presence at Dock of the Rays and before that, Kevin Gengler Doug Milhoan had one at RaysProspects. Today, the Rays are hosting their first ever Tweet-up in conjunction with CNBC's Darren Rovell who is doing a national story about it and is pulling double-duty as he will also be performing the National Anthem before the game. Last season, the Rays barely had a Twitter presence and let Facebook be most of the social media presence for the team, but this season that script has been flipped as the Twitter presence has done a tremendous job this season while the Facebook presence has been somewhat lacking.

Before you read any further into this piece, get on Twitter and follow @RaysRepublic. The account currently has 4,421 followers, but what I like about the account it is that it is actively engaged with its followers. @RaysRepublic replies to fans daily, runs in-game Twitter trivia contests for Twitter followers that are at Tropicana Field for games, and keeps everyone informed of the community events the Rays have throughout the season. Even better, the people behind that account are fans and not just a Rays RSS feed of information. Look at some of their in-game commentary over the past week:

That is one of the benefits of having just over 4,400 followers as it allows the people that run the account the time to stay actively engaged with their followers. Compare the @RaysRepublic feed to the @RedSox feed that has nearly 120,000 followers. That feed tends to be a lot more pushing of content than a back and forth situation, much like the Rays Facebook presence.
The Rays Facebook presence is very popular with 337,406 "likes," and counting. The site is run independent of the @RaysRepublic account and in fact, is also controlled a bit by MLB Advanced Media (MLBAM). It is no accident that every team's website looks identical because that web presence is mostly controlled by MLBAM and the Facebook presence has a MLBAM influence as well. If you look at any team's Facebook presence, you'll find wall posts with highlights from the last game and what not; those are all MLBAM influences on the pages.
The big turnoff for me with the Facebook page is the lack of interactivity that is seen on the @RaysRepublic account. The Facebook site is a quasi-RSS feed of press releases and highlights, with no interactivity with the fans. The entire point of social media is to take fan access and interaction to the next level, but the Rays Facebook presence appears to be stuck in an old-school mentality for fan interaction.
Consider this issue a few weeks ago when the page announced an appearance by B.J. Upton a day after it happened. 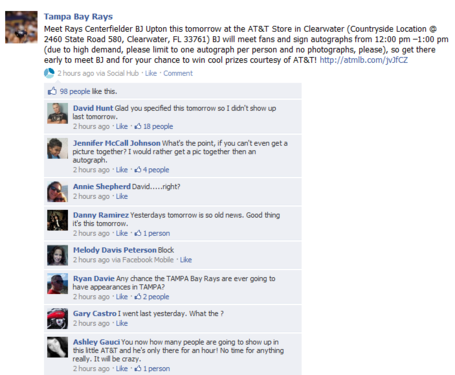 The negative comments did not take long to appear, but they also went unanswered which did not quell any of the frustration expressed by those fans. The site could easily become the responsibility of a few interns in the front office who consider Facebook interaction as routine as brushing one's teeth in the morning and instantly take the Facebook presence to a more enjoyable level for the fans.
It would also be nice to see the site include updates for the minor league affiliates so fans can read the latest news from Durham, Montgomery, Port Charlotte, Bowling Green, Princeton, Hudson Valley, and the rookie leagues. That kind of interaction would further help push the organizational feel for fans so more fans can get to know the next wave of players before they don the Rays uniform for the first time in their career. Fans have been excited about Desmond Jennings coming to the majors this season, but most of the news related to him before his call-up was tied to the frustration of him not being called up sooner. Matt Moore is the name on the lips of most Rays fans these days, but less know what Alex Torres, Alex Colome, Chris Archer, or even Marquis Fleming is up to these days. Admittedly, there are avenues for fans to find out information on those players, but the goal of the Facebook presence should be to become a one-stop shop for everything Rays and not just an information push.
Social media is defined by Andreas Kaplan and Michael Haenlein as "a group of Internet-based applications that build on the ideological and technological foundations of Web 2.0, and that allow the creation and exchange of user-generated content." Social media are media for social interaction, as a set of methods to enhance social communication. @RaysRepublic exemplifies this definition while the Rays Facebook presence is still in the 1.0 model of Web-based content. If you are a follower of the page, make an effort to get on the wall and encourage the site to upgrade to Social Media 2.0 like the team's Twitter presence has done, and done very well.