With the Rays playoff odds down to 0.8%, it's worth reevaluating why we still watch. For me, it's all about being able to see success before it happens. Think back to 2007. The Rays were out of contention before the season ever really got started. We knew that Scott Kazmir would strike a lot of guys out, Carl Crawford would be fast, and that we'd signed some guy who had hit 30+ home runs in Japan. If you were more savvy than I was, you were probably excited about the arrivals of BJ Upton, Delmon Young, and Elijah Dukes. But still, that team had Greg Norton at first base and not a single left handed pitcher in the bullpen when camp broke.

The 2007 Rays finished last in the league, had one of the worst defenses of all time, and a bullpen to match. It was horrible to look at. But Fast forward to 2008 spring training. When a friend asked me if I could believe the PECOTA projection of 88 wins, I could say that I did. When he opined that it was folly to move Akinori Iwamura to second base, being that he had played below average defense at third base, I could say "maybe, but the guy has good hands and some real quick feet." When a Twins fan told me that Bartlett makes too many throwing errors, I was able to smile, as I pictured Brendan Harris at shortstop for his team.

Because I watched the 2007 Rays religiously, I knew that BJ might make a real good center fielder. I knew that Grant Balfour and Dan Wheeler were not like Brian Stokes and Gary Glover. And I knew that Shields had the most under-appreciated changeup in the game. 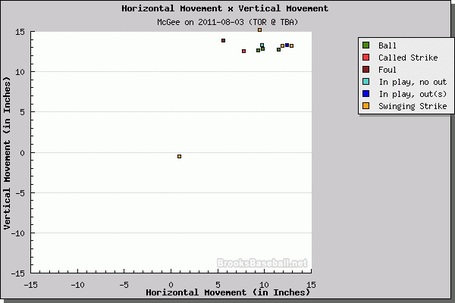