Jeff Niemann was outstanding last night against the A's as he pitched eight and two-thirds innings for his sixth win of the year.  The Rays offense wasn't half-bad, either.  They amassed eight runs on fourteen hits and had both five walks and strikeouts.  This outstanding team effort was a pleasant sight after dropping three of four to these very same A's just a few series ago.

I don't want to jinx it, I really don't, but Jeff Niemann is back!  I realize he's been putting up great numbers all July (3-0 with an ERA ~1), but it takes a while to be worked into the circle of trust. Not too long ago, Niemann faced the punchless Houston Astros and gave up five runs on seven hits in just three innings. I remember that game well, because I was there.  But, since that debacle, Niemann has been the Nyquil of old, lulling hitters to sleep with that sneaky-fast 92 MPH fastball and an assortment of offspeed treasures.

As you might can tell from the photoshopped photo to the left, I've been most impressed with Niemann's curveball of late, and especially this game. Of his 119 pitches, Niemann dropped the hook 28 times last night and generated 18 strikes, three swinging (10.71%). This isn't an outrageous number or anything, but what impressed me most was his ability to get strike one with the deuce.  Like his fastball, the curve had that Nyquil effect last night, as the A's hitters just fell asleep when the pitch tumbled over the plate for a called strike. From the eye test, the A's hitters gave up on almost every curve early in the count.

But, here you are looking at me quizzically, because, from the numbers, it didn't look like Niems had that great of a game. His full line on the night was not the prettiest I've ever seen: 8.2 IP, 4ER, 7H, 1BB, 1HBP, 8K.  Well, forget the line, because the man looked downright dominant after allowing a four-pitch walk to Jemile Weeks to leadoff the game. Of his four runs, two came courtesy of a Coco Crisp two-run homer in the sixth inning that brought the A's within two of the Rays. The other runs came as Niemann tried to close up shop in the ninth. He allowed a no-doubt solo-shot to Hideki Matsui for the third run then a double by Davd DeJesus followed by a Cliff Penington triple to score him. The triple wasn't all that well struck, but Desmond Jennings attempted to make a Fuldsian game-ending dive and came up a foot or so short. At 119 pitches, Joe Maddon decided Niemann had done enough and brought in Kyle Farnsworth to finish off the game. Fans weren't too pleased to see Niemann removed, but the Maddon-boos soon turned to Niemann-cheers as he walked off the field and tipped his cap in a Kotchman-like fashion.

Another Niemann movie, and some offense after the jump...

This certainly reminds me of the Niemann of old, the Nyquil of yesteryear. If you'll forgive me a second photoshopped movie poster, I made this one as Niemann's hook was scarier than that deranged fisherman's who stalked us after we ran him over on prom night. We all might have thought he'd forgotten it -- there have been plenty of bad starts -- but, now it's back... with a vengeance. Just look how he's going to drop that hook and ruin that pretty blond's night. 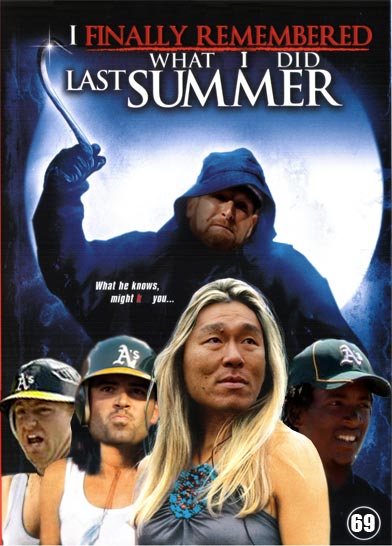 The offense was also out in force last night. Every Rays hitter had a hit except Sean Rodriguez who had a bit of a rough time against a righty starter in Moscoso. Johnny Damon, Ben Zobrist, Casey Kotchman, B.J. Upton, and Matt Joyce all had mulit-hit affairs, Upton's being the most special as he reached base all five times on the night (3-3, 3B, 2RBI, 2BB). Going back to last game, that gives BJ seven straight ABs that he's reached base.

After a quiet first three innings, the offense took care of Moscoso and the A's relievers, but it's not like they didn't have a little help. With bases loaded and just one out in the fourth inning, Robinson Chirinos stepped up to the plate. I was conflicted at that moment because of Chirinos' success of late, but also because of the Rays struggles with bases-loaded-less-than-two-outs situations. The result was a bit of yin and yang as Chirinos grounded back to the pitcher for what looked to be a sure double play, but Moscoso deflected the ball straight down to his feet and the looked everywhere but down. He eventually found the ball, but not before Zobrist could score from third.