The Rays and the Six Man Rotation

Share All sharing options for: The Rays and the Six Man Rotation

The Rays had just finished a grueling 10 game stretch against the New York Yankees and Boston Red Sox and lost a 10-4 game to the Kansas City Royals in a game filled with miscues and a feeling of the Rays saying "uncle" on the 2011 season.

"Part of our concerns are that Helly doesn't get too many innings and that Shields and Price are trending really high," Rays manager Joe Maddon said. "They're still going to be really high within their capabilities for the season. But the fact that [Cobb] has done so well, we thought that we could go with this right now and it benefits everybody.

"So by doing it, hopefully we're not losing anything. We're still going to try and pop James and David in on regular rest on occasions against the appropriate teams. But primarily it was to limit Hellickson and also to put a little bit of a break on Shields and Price." -- mlb.com

Joe Maddon wanted to limit the innings of his starting staff, but other managers have also gone to 6 man rotations at different points this season.  The Chicago White Sox didn't want to take Phillip Humber out of the rotation when Jake Peavy returned from the disabled list, the New York Yankees inserted  Phil Hughes to provide additional rest for the rest of the rotation, and the Kansas City Royals, for some inexplicable reason, made room for Kyle Davies.

Joe Sheehan of SI.com notes that in the early days of the five man rotation featured the largest workloads by starting pitchers in history. The end of the large workload model came after Billy Martin pushed his Oakland Athletics starting staff to an astonishing 94 complete games during the 1980 season. The oldest member of the A's starting staff was 28 year old Rick Langford (28 complete games/290 IP) followed by 26 year old Steve McCatty (11 CG/221 IP), 25 year old pitchers Mike Norris (24 CG/284.1 IP) and Brian Kingman (10CG/211.1 IP), and 24 year old Matt Keough (20 CG/250 IP). Each member of the A's rotation suffered from poor performance or injury in the years that followed and the concept of pitch count and limiting innings pitch began to gain favor. Sherman notes that the problem with the six man rotation is that the innings given to the sixth man takes away from productive innings from one of the better starters on the team and since the extended workload model won't gain favor, teams will still have to carry a 12 or 13 man staff reducing the offensive options to nearly zero.

The 6-man rotation has come to an end with Alex Cobb being placed on the disabled list, but after the jump we'll take a look at the Rays pitchers performances relative to days of rest between starts.

Tom Tango in "The Book: Playing the Percentages in Baseball"  looked into what is deemed as Recovery Period for starting pitchers.  The study was broken down into all pitchers who had at least 800 Plate Appearances against with 600 PAs in a starting pitching role resulting in a total of  206 pitchers. The next step was to define the time slots to examine. This was done by looking at how many days between appearances and how many batters the pitcher faced. Appearances where the pitcher faced 1 batter but less than 18 batters were discarded and written off as an aborted start or a relief appearance which resulted in 14,990 starts to examine. The wOBA against pitchers on 3 day rest, 4 day rest, and 5 day rest were examined.

The result of the study indicates that the performance level of the starting five will increase slightly but the net gain will be eliminated by increasing the role of the sixth starter. Additionally, by eliminating the swingman the bullpen depth is depleted further.  At the end of the section, the boxed portion of the "The Book Says":

The following table shows the Rays starting pitchers performances on 4 days, 5 days, and 6 or more days rest, the  number of plate appearances against, and their associated wOBA. The data was compiled from baseball-reference and it should be noted that the first start of the season is automatically put in the 6+ days or rest column.  Most of James Shields, David Price, and Jeremy Hellickson's starts have come on either 4 or 5 days of rest. Shields seems to perform better on the normal 4 day schedule while Price and Hellickson seemingly prefers to pitch on the extra day of rest. Jeff Niemann has been given the least amount of work on 4 days rest and seems to perform at his best when he has 6 or more days between starts. Wade Davis' starts have been more evenly distributed and he seems to have the most success when pitching on 5 days rest. Alex Cobb's body of work may be too small to make a discernible judgement on. 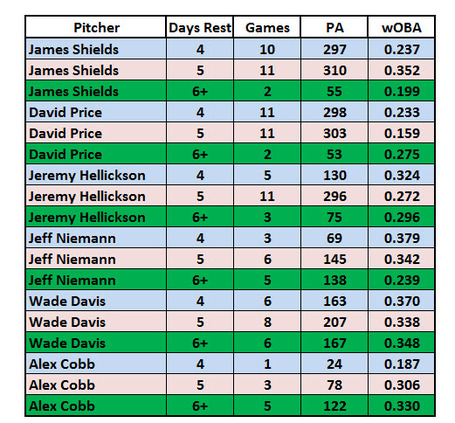