I think it's both accurate and fair to say that B.J. Upton takes some pitches that he should swing at. But rather than simply making a "called third strike looking face" along with Beej every time he takes a called third strike looking, I've built a bunch of strike-zone plots. This made me considerably happier than the face would have, and I think there's a fairly obvious conclusion to be drawn from these plots, as well. 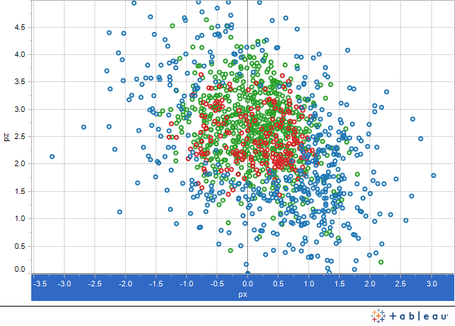 The most interesting thing that jumps out at me is not the smattering of takes right down the middle. I haven't done the legwork yet to know how many of those should be expected for an average baseball player, so I don't care to comment about the number Upton shows here. But look at that red area in the down and away section of the strikezone. Here's a location that is almost never called a ball, but BJ still takes pitches more often than he swings at them. What gives?

Here are all of Upton's fastballs from right handed pitchers this season: 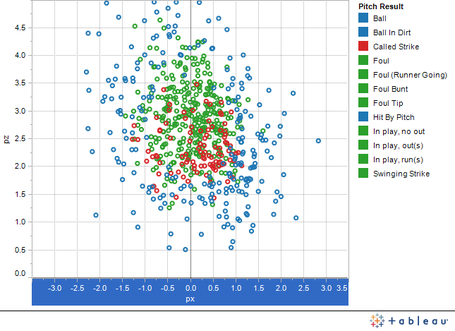 And fastballs with two strikes: 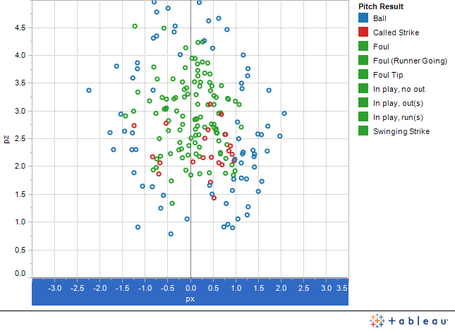 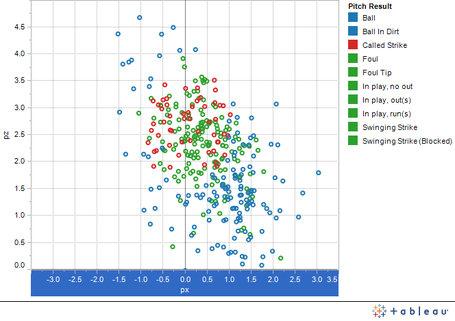 And breaking balls with two strikes: 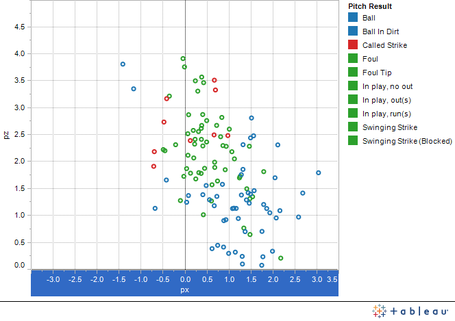 I like seeing the two strike plots because, like the low swings from Evan Longoria in one strike counts, this is an example of the batter being fooled. He's trying to protect the plate (he really is -- Upton allows less called strikes when it would mean a strikeout than he does in other situations), and there's no strategy or "waiting for a pitch" that justifies taking the probable strike.

And look at the location of these called strikes. BJ fails to swing at fastballs low and away and at breaking balls up and in. A fastball from a right handed pitcher moves up and in to him, so if it were to start on a trajectory to be off the plate low and away, its spin deflection would take it back towards the plate. Similarly, a breaking ball from a right handed pitcher moves down and away from Upton, so if its initial trajectory had it being a ball high and inside, its spin deflection would bring it back over the plate.

This is pretty interesting. BJ Upton's frustrating plate discipline problems may not come from lack of a plan, lack of adapting his approach with two strikes, or any of the other sins angry fans accuse him of. It seems to me like he's seeing the initial trajectory out of the pitcher's hand just fine, but he's not recognizing, or not properly adjusting for the movement of different pitch types.

There was a great interview by David Laurila with Adrian Gonzalez on Fangraphs awhile back. One response stuck with me:

DL: What do you see when the ball comes out of the pitcher’s hand?

AG: I see rotation. I can pick up on what the pitch is as soon as the pitcher lets go of it. Most of what you see is innate. If you ask some of the great hitters, they won’t all say the same thing. Some just see balls. Some guys see speed out of the hand. I can’t recognize speed, but I can recognize rotation. Some guys can recognize speed but not rotation and some guys just see a ball and swing. They just let their abilities take over and that’s not something you can teach.

According to The Extra 2%, the Rays now use specially marked tennis balls in pitching machines to teach rotation recognition in their minor league system, but this drill came after BJ had graduated. I don't know if it's something that can be taught at the major league level, or if this is the batting eye Upton is going to have and there's nothing a batting coach can do to change it. As a Rays and an Upton fan, though, I hope Rays Intern #42069 reads this and forwards it to Shelton, who has a eureka moment and turns BJ back into a 5 WAR player in time for a title run next year.