Welcome back to This Week in Sun Sports, kids. As always, we'll be looking at the oddities of the Rays broadcasts from this past week. Anything from the announcing, to a crazy video segment, to the fans in the stands. If it's on Sun Sports, we see it. Because--like the employees at Rolex--we're always watching.

This week covers Monday, August 29th - Sunday, September 4th. If you missed last week's, you can find it here.

"This Week" is actually two weeks ago. "Next Week", which was last week, will be (was) skipped due to travel. "The Week After Next," which is now, will be done in one week's time. At that point we'll sneak back on schedule and our writing will be at its peak. So, in summation, "This Week" is old by two weeks when it generally just last week. "Last Week", which when we're talking about "This Week in Sun Sports" is next week, never happened because it was too weak. If you have a problem with this, don't freak, "This Week" we'll give you those funny Rays moments that you so desperately seek, Geek.

We start off this week with a boogie-oogie of a good time. After scoring on a Johnny Damon home run in the first inning, Jennings decides to give a shimmy-shimmy shake with "The Master of the Dougie" Reid Brignac.

It's a short clip, and might trigger a seizure or, at the very least, mild nausea, so click here to watch the duo break it down.

Later in that game we finally had full-on legit conformation that Astro the Dog is still alive. It also appears that a kind doggie surgeon has restored his limbs: 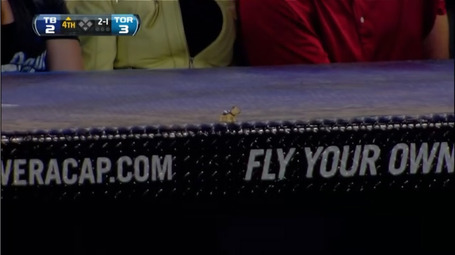 Dewayne Staats delivered one of his classic lines upon seeing Astro perched above the players:

Astro's right on the ledge of the dugout "ruff."

Ripping on BA, a Sonny-sighting, and a special visit from OrlandoRays...after the jump.

Despite the game being played in Arlington, it looks like former DRB commenter and furry-fanatic Orlando Rays made it down for the game. And they got great seats behind the plate, too. (h/t literally the entire staff for noticing this) 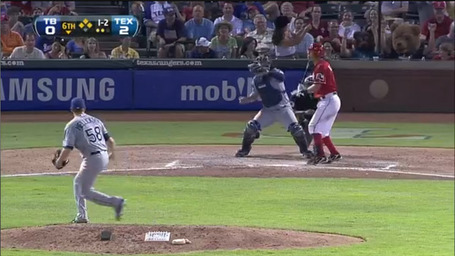 Obviously Jeremy Hellickson was flummoxed by the Bruins as that pitch is way out of the zone. 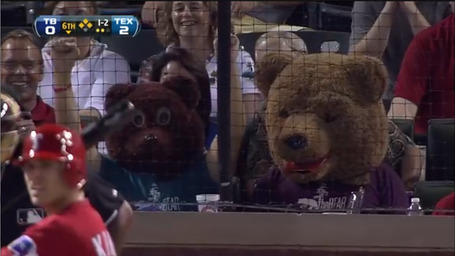 Here they are a bit closer, and just as scary--or arousing if that's what you're into. #NTTAWWT 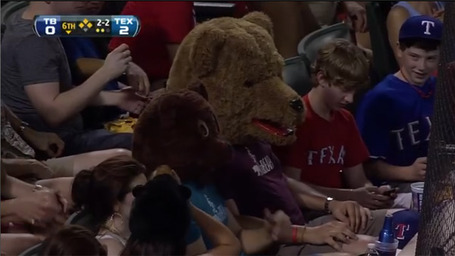 I think there's two things to take from this:

Today, we have a little Brian Anderson bashing courtesy of "De-Wayne and the Boys." It begins with BA sharing the screen with Rangers' pitcher Matt Harrison: 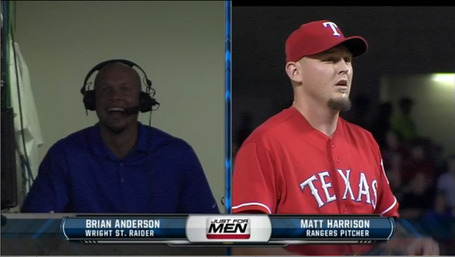 BA was taken by surprise with this. Partially because of the "Wright St. Raider' under his name, but more because of the awful picture. Between chuckles, he commented at this slight on his person:

BA: Mix in a file photo. Right there I look like a derelict.

Staats and the boys were ready, however, and countered immedately with this:

Staats: OK, you want a file photo? How's that, there's a file photo for you. All you gotta do is ask for it and you got it. 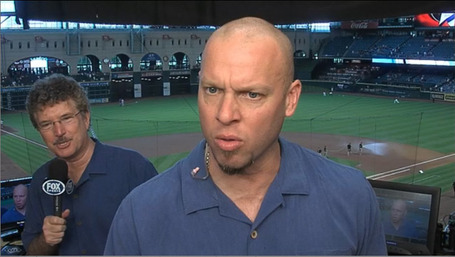 I like to pretend that Staats says that last line like a gangster. Like, "You want a hand?" *cuts off guy's hand* "How's that, there's a hand for you." Or, "Leave the file photo, take the cannolis."

I was impressed that they had this photo queued up and ready to go. Makes you wonder what else they have on BA if they let this one go so quickly. The boys served up another one in the next half inning, this time as BA was speaking of the benefits of owning Rays season tickets. 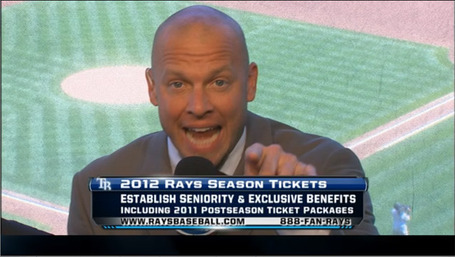 This image stayed on the screen while BA gave his spiel and when he eventually noticed that this still frame was up and not, you know, the game, he went into quite the giggle fit. Sometimes these guys make it too easy.

Sun Sports gave us their best WGN impression when they pointed out these ladies in the 3rd inning: 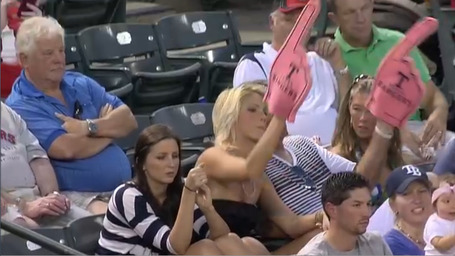 Listen, Sun Sports, you can't just show one reasonably attractive girl in the stands and make us think you're WGN. The Superstation has years of practice squeezing every possible Cubbie Cutie into a day game broadcast. And they show hometown-hotties, not Rangers fans thrusting third reich foam-fingers.

What this shot did serve to do was allow Dewayne Staats to remind everyone of BA's wonderful picture from the day before (just above):

Dewayne:This reminds me of something. This is Brain Anderson "I'm going to tell you something right now," pointer finger night.

BA: Yeah, and the future Mrs. Anderson is holding on to it.

Dewayne: We'll be checking in with Todd Kalas a little later and we'll have him help us to point the way to TK.

That last comment from Dewayne leads us a few innings later to Todd Kalas starting off an interview like this (h/t Whelk):

So, let's break this clip down:

Oh, Kids' Sunday, how we've missed you. We could probably do an entire series just on Kids' Sundays alone. Especially days like today.

In the top of the 2nd came one of my favorite shots of the season: 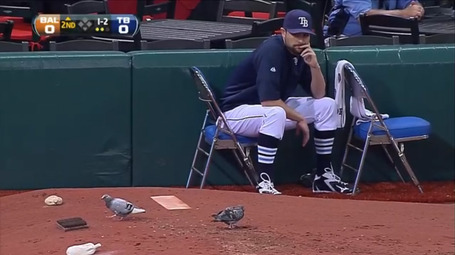 So as the Rays played the Birds (Orioles) on the field, the birds played off the field, too.

So, as of writing this, Andy Sonnanstine has not pitched with the big club since June 27th. Of course, much time was spent in AAA, but even after returning to the big club, the "long man" has not made an appearance. Here, Sonny is giving the most longing of looks. The question is: What is he looking at?

Next we move to the bottom of the 3rd where TK is showing off Kelly Shoppach's spoils from the Rays fantasy football league. Apparently, Shop was the big winner and wanted to tell the world through the dulcet tones of Todd Kalas. 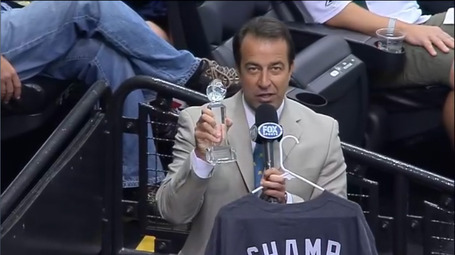 There, Kalas is holding a Rays shirt that says "CHAMP" on the back and a translucent trophy that could not possibly be confused with anything else. In regards to to the "trophy," Kalas remarked that Shoppach "apparently bought [it] himself."

This started off a full broadcast day of Staats and BA praising Shoppach for being a character. They mentioned the "One item you couldn't live without" segment we looked at a few weeks ago. They also showed a clip of Shoppach being asked what actor would play him in a movie. The answer:

BA was oddly specific when comparing Kelly Shoppach to his 'favorite' holiday gift:

BA: "He's the gift that keeps on giving, He's like jelly of the month."

Dewayne: "Jelly of the month? I've wondered about that. How do you sign up for that?"

BA: "You get it given to you around the holidays by someone who... doesnt really care about you, but they feel like they need to get you something.

Boy, I hope Aunt Irma wasn't watching that segment, BA, or you're not getting anymore of the "gift that keeps on giving the whole year."

And we're not done yet!

Shoppach also said his favorite video game was Tecmo Super Bowl. That gave us this wonderful piece of tl;dr from BA:

BA: Played a season of Tecmo Bowl one time when I was in college. Played the whole season in a day. All day long. It was like veged out all day. Here's the thing. I get to the AFC Championship game--

Dewayne: Line drive to left. And that's going to be caught by Guyer

BA: Down by like 5 points with, I don't know, a minute to play and I run my little guy down and they're fighting the little tecmo bowl fight and all of a sudden you hear "bew bew bew" which is the sound of a fumble, OK? And I cough it up at about the 4 yard line and lose the AFC championship game. And I picked up a shoe and went to throw it behind me to hit the end of the bed because I was just--all day I had spent. On high. And I didn't keep the stiff wrist, I flipped the show and didn't power it--well, I kinda powered it with a flip at the end

Dewayne: Sometimes it can be extrememly dangerous if it's a flip AND power.

BA: That's right. And, what happend was that shoe ended up out the window and in the front yard through a pane of glass and in college when you don't have any money to pay for those kind of damages. How about that? Yeah... that was a tough phone call home

This right here is your love-him-or-hate-him Brian Anderson moment. He goes off on a crazy tangent about a 25 year-old Nintendo game and isn't fazed for one second by the actual baseball game he's supposed to be announcing. Thankfully, Dewayne Staats is there to even out the banter, and, I find, it works well. Staats is good enough to keep the game in perspective, mockingly comment BA, and then bring the viewer back into the game at hand by mentioning the pitch count. Just as Rays pitchers often have a lower ERA than FIP due to the great fielding behind them, BA looks better because of Staats. I think they go together well, but maybe that's just me.

Finally, we have another one of those Kids' Sunday clips reels. Since sunday was Evan Longoria cereal bowl day, this week the question is "What is your favorite Kids Cereal?" Just guess who doesn't answer correctly.

Well, that's it for This Week in Sun Sports. Thanks again to all of you who helped by pointing out the funny this week. If you see something during the game that would fit "This Week in Sun Sports," please help us (me) out and tag it (#TWSS) in the GDT or email a description or screencap to ThisWeekInSS@gmail.com.

I know I said we weren't going to get into this next week, but 'tbclays' (h/t, r/a) mentioned this Staats moment which was too good to pass up: 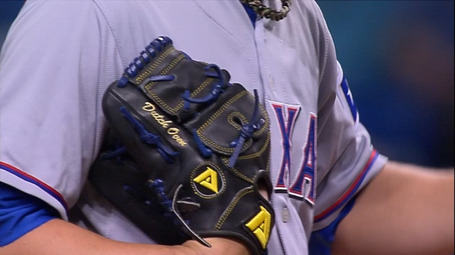 In the 5th inning against the Rangers, the camera caught a shot of Derek Holland's glove with "Dutch Oven" embroidered on it. This is clever enough, and Staats and BA had a good chuckle over it. It appeared that they were going to let the moment pass after that, but a few outs later, Staats let this little gem slip out:

He's put a blanket over this Rays offense the last few innings.

That is bonafide gold, right there, ladies and gents.

BA tried to join in, but he was a bit on the nose:

You don't want that offense to stink it up.

These are your Rays announcers, people. If somehow you're not getting this highbrow reference, please google Hollands glove inscription, maybe not at work though. Eh, whatever, you shouldn't be reading this at work either, so who cares.

Let that sink in, and we'll see you next week.