Share All sharing options for: The Best Run Prevention In Rays History

It appears I've gotten into a "Best Ever..." kick after my Matt Moore piece yesterday. I don't mean to come across as hyperbolic or over-the-top, but I think this is a point worth making: the Rays are on pace to set an all-time low for Runs Allowed. They are currently at 548 runs allowed, and if they stay at their current pace for the remainder of the season (3.75 runs per game), they'll finish with just over 600 runs allowed.

The Rays haven't been blessed with many years of good pitching and defense -- where art thou Casey Fossum? -- but considering how pitching-focused the Rays have been in recent years, I find the extent of their improvement this year mind-boggling. Their next best season in franchise history was 2010, when the Rays only allowed their opponents to score 649 runs against them (4.01 per game). And in 2008, the year that the Rays made the World Series largely on the strength of their pitching? Yeah, they allowed 671 runs that year.

Obviously, allowing fewer runs to score is a good thing. But it's even more important for the Rays this season, as their offense is on pace to score the fewest amount of runs since 2006 -- you know, the season Julio Lugo had the highest OPS on the team. The Rays are averaging 4.32 runs per game, putting them on pace to score 699 runs.

A part of this drop in offense -- and the surge in pitching -- is a result of a league-wide change in scoring. Offense is down around the league, so it's not entirely fair to compare the Rays' offense to prior teams that played in a more hitting-friendly environment. But even when you account for the change in the scoring environment, this is still their worst team offense since 2006 (at only 1% above average), and their pitching staff is currently tied with the 2008 staff for the title of best in franchise history (10% better than average at run prevention).

The 2011 Rays are exactly what they feel like they are: an average hitting team that lives and dies with their pitching staff. And more specifically, their starting pitching staff: 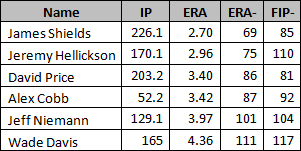 *ERA- and FIP- both measure percentages above or below average. So a 69 ERA- means Shields has an ERA 31% better than league average.

If you will, ignore the fact that those ERAs look unsustainable according to FIP and other pitching metrics. The Rays have a superb defense that allows their pitchers to outperform their peripherals year in and year out, but more to the point, we're not talking about what will be -- we're talking about what was. And in that regard, the Rays' pitchers have been phenomenal this season at preventing runs from scoring. They have a collective 3.49 ERA, third-best out of all the starting rotations in the majors, and they have pitched the most innings of any staff. Not to mention, every single one of these pitchers was home grown.

This is by far the best starting pitching staff the Rays have had in team history, and going forward, we only have more to look forward to. The idea of Price, Shields, Hellickson, and Moore sharing a rotation next season is already giving me shivers.