Dave Cameron is right. The pressure is on the Tampa Bay Rays, not the Boston Red Sox. Ignore the collapse talk; ignore the "hot" narrative; ignore everything but the incredible odds against the Tampa Bay Rays right now. Because that will make the magic of this season only greater.

Jeff Niemann (W, 11-7) threw 89 pitches through 5.0 innings, but limited the Red Sox (87-64) to only 2 runs, giving the Rays (84-67) a narrowed 3-game deficit in the Wild Card race. Niemann walked only 2 Red Sox batters and struck out an uncharacteristic 6 hitters, including a K to Adrian Gonzalez and Dustin Pedroia (whom Niemann also picked off to finish the 5th inning).

Then, eschewing the common approach, manager Joe Maddon pulled Neimann for the 6th inning and sent rookie and top pitching prospect Matt Moore into the game. Moore started his appearance by busting the radar gun, hitting 98 mph in his second and third pitches and earning praise from temporary closer Joel Peralta:

And Daddy went on to pitch 3.0 innings, striking out 2, walking 2, and allowing only 2 singles which led to an RBI ground out in the 7th. Moore then handed the ball to Peralta, who apparently doesn't care much for closer mentality talk. Peralta struck out two batters and didn't let the ball leave the infield en route to collecting his 4th save and giving the Rays a 4-3 win.

Offensively, the Rays started properly with a Fenway Special, a 300ish ft. Ben Zobrist home run to left, giving them a 2-0 lead in the top of the first. Desmond Jennings pushed the lead to 3-0 in the third, doubling, moving to third on a ground out, and then scoring on a wild ball four to Evan Longoria. Then, in the fifth, Longo added an insurance run on an RBI single to right field. 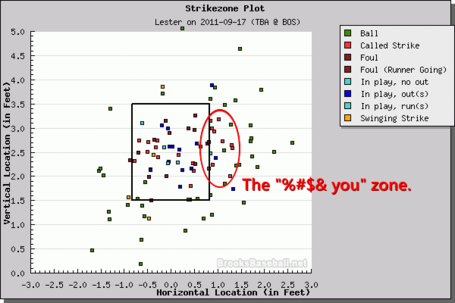