Welcome back to This Week in Sun Sports, kids. As always, we'll be looking at the oddities of the Rays broadcasts from this past week. Anything from the announcing, to a crazy video segment, to the fans in the stands. If it's on Sun Sports, we see it. Because--like Roz from Monsters Inc.--we're always watching

If you missed last week's TWSS you can find it here.

The full TWSS will be up a bit later in the week, but today we present a quick hitter. A segment that refused to walk the long goodbye to obscurity. A segment that said, "No, Jones! I will not be overlooked because you went on vacation." A segment that truly raged, raged against the dying of the light! (Thanks, Dangerous Minds!)

Today, we give you: The Blue Mystery Wife. 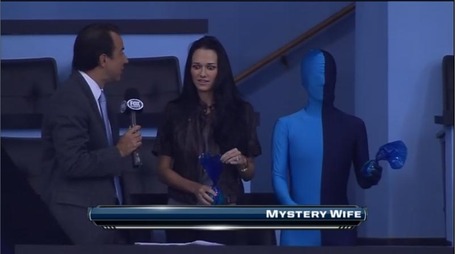 Those of you who missed this segment from a Tuesday night game against the Ranges are probably utterly confused by the image in front of you. But, don't worry, because those who did watch the interview are just as confused as you are. From left to right we have Smooth Operator Todd Kalas, Allison Shelton (wife of hitting coach Derek Shelton), and, or course, The Blue Mystery Wife (BMW).

Allison and BMW are promoting the "Mystery Ball," a charity event where fans buy "mystery balls" for $30. These balls have been signed by Rays players and staff and many other stars around the MLB. Remember, we're working with the past here, so this "Mystery Ball" has already happened on Saturday, September 10th during the Rays-Sawks game. Proceeds went to All Children's Hospital. Before I start mocking and poking fun at the segment, I just was to say that I think it's great that the Rays do so much in the charity and outreach department and I'm sure this event helped change many lives for the better. Kudos to the Rays Wives and the other organizers who put this event together.

There are so many great things about this segment, but I'm going to focus on three:

Let's get started... after the jump... (fair warning: might get slightly blue)

1. The Blue Mystery Wife and the "Mystery Ball"

In addition to the "mystery balls," there was also a silent auction in front of the Whitney Bank Club. Some of the items up for grabs were a Johnny Damon bat, a B.J. Upton signed opening day base, and a signed bottle of Wine from Joe Maddon's personal collection. Before we go on, wine from Joe Maddon's personal collection? It's not like Joe Maddon makes his own wine, a la Francis Ford Coppola (except in this alternate reality). He gets his wine from the store like everyone else. It can't be that great of a bottle, or he wouldn't have given it away. Enjoy your 2009 Kendall Jackson Pinot Noir. On a side note, I'm holding an auction for a signed box of wine from my personal collection. A 2011 Franzia Chillable Red. 2011 was a great year for box wine.

Anyhoo, you could win some great prizes at the auction. In the words of Allison Shelton:

Ohhhh. I get it. *wink wink This Mystery Ball is going to be filled with "mystery wives" and "mystery balls." I've seen Eyes Wide Shut, I know how to play this game. I'll remember to bring my checkbook, too, because as Allison mentioned again, there will be:

Other things, normally you can't bid on. 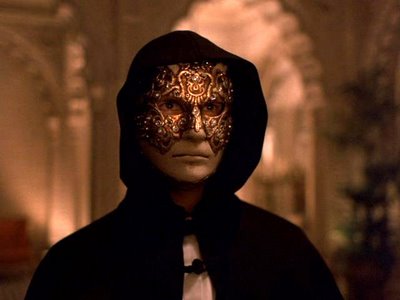 In case you were still doubtful of the true nature of the ball, BMW and Shelton confirm our suspicions in these comments to Todd Kalas:

AS: That's the fun part of it.

BMW: I plan on running around like a lunatic, bringing everyone upstairs at Whitney Bank with me.

There you have it, folks. I don't think it's any plainer than that. As to who the mystery wife is, the world may never know. Despite him not being with the team anymore, my best guess would have been Pat Burrell. Notice the remarkable similarities, here (probably NSFW).

Of course Staats and especially BA had something to say:

BA: "I like that whole Idea of the Mystery Wife.

BA: "What? Why does everyone react that way? I did. I thought that was a good little set up there. Come out and make it happen, people."

DS: You llike it as a marketing strategy is what you're saying?

After that comment, Elvis Andrus slapped a single to left field. It took Staats a full 40 seconds of pondering the 'concept' of the mystery wife to comment on the hit.

3. The Many Faces of Allison Shelton:

Allison Shelton is a wife of the non mystery variety. She is quite pretty, as you can tell, but every time I paused the interview she always had a hilarious face. I composed a brief picture story: 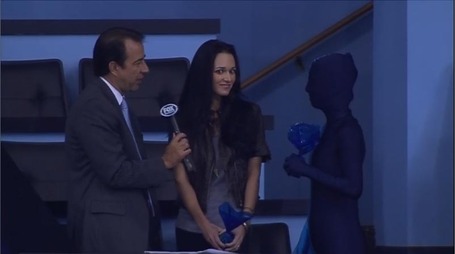 They're supposed to be "mystery balls." 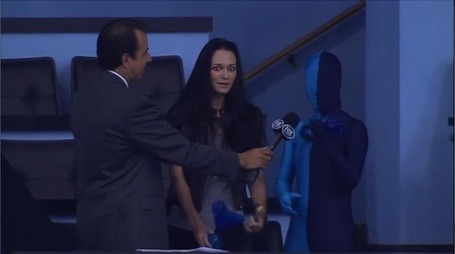 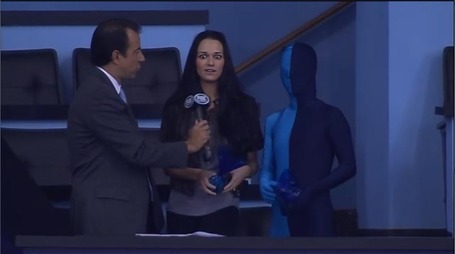 Um, it just winked at me.

And scene! Hopefully that wasn't too blue for you. If you'd like to caption your own play with these pictures, have at it.

That's it for the Blue Mystery Wife Edition of This Week in Sun Sports! Thanks for reading and look for the full edition of TWSS coming soon. Thanks again to everyone who spotted the BMW. If you see something during the game that would fit "This Week in Sun Sports," please help us (me) out and tag it (#TWSS) in the GDT or email a description or screencap to ThisWeekInSS@gmail.com.