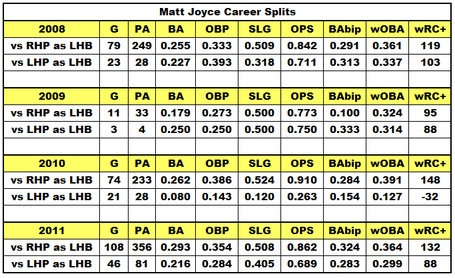 Matt Joyce got off to a blazing start of the 2011 season and then struggled either due to a shoulder injury, a natural regression, or a combination of both. Joyce has rebounded from the disappointing June and July to post a very nice August by hitting a .787 OPS (.282/.364/.423).

When looking over Joyce's month-by-month performance the question that kept percolating in my mind was whether or not Joyce's performance against pitcher handedness changed as well? In other words, when Joyce performs well against RHP does he also perform well against LHP and does the same hold true when he struggles against RHP (does he struggle against LHP as well)? The month-by-month splits for Matt Joyce are presented after the break.

As shown in the tables below, Joyce has been given approximately the same amount of plate appearances for each month of the 2011 season. I will proceed forward with the understanding that less than 20 PA per month isn't a statistically significant sample size as the data is being presented for discussion more than it is to prove or disprove a theory. I'll be looking at the difference in OPS against LHP and RHP more than the individual components of the slash line.

The data provided is inconclusive as to whether or not Joyce hits well against LHP when he performs well against RHP or if he struggles against LHP when he struggles against RHP. The question remains whether or not Joyce can be an everyday RF for the Rays in the future but I am encouraged by Joyce's August performance and feel that his overall performance in 2011, an OPS of near .700, is adequate enough to garner most of the starts versus LHP in 2012. 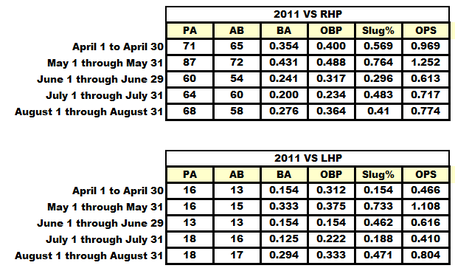 I've included the month by month splits for 2008 and 2010 below for those interested. 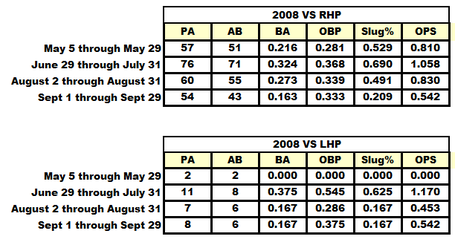