Share All sharing options for: Wade Davis Finds Some Mojo

Wade Davis's season can be easily split into three segments: successful by unsustainable, firestormin' sh*t show, and mediocre mediocrity. While that's somewhat simplistic -- his season had more ups and downs than that suggests -- as a general pattern it holds together well. Davis couldn't strike out a soul to start the season, relying on his defense to save him, but that's gradually changed over the course of the year. Over his last eight starts -- which takes us back to two starts after he returned from the DL   -- Davis has posted a 3.99 ERA and struck out 6.6 batters per nine. That's not world-shattering, but it's sure better than he did at the beginning of the season.

But you probably already know all this. J.C. Mitchell did a post on Wade Davis a few weeks ago, pointing out how he's changed his approach slightly since returning from the DL. He claimed that Davis had started using his curveball more while ditching his changeup, and he was seeing better results. And since his post, the pattern has still held true: 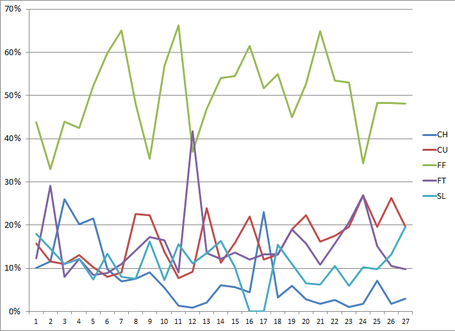 Thanks to RZ for the inspiration with the graphic.

Davis came back from the DL on his 18th start, and ever since that point his curveball usage has spiked. His slider use has also spiked more recently, and Maddon's said that he's improved the action on the pitch. Combine this change in approach with an increasing fastball velocity and, apparently, you have an improved pitcher.

But Mitchell's article made me want to keep digging. In particular, I'm curious about Davis' pitch selection. What is he using as his out-pitch? Has he changed how he's attacking hitters recently? Let's take a look.

Before I start off with the numbers, it's important to remember what makes a good out-pitch. Typically, pitches with horizontal movement (e.g. sliders) are best at generating whiffs against same-handed batters, while pitches with vertical break (e.g. curves and changeups) are best against opposite-handed hitters. So theoretically, we'd expect Davis to be using his slider as his out-pitch against righties (especially if he's improved its movement recently) and his curveball as his KO pitch to lefties. Or at least, something along those lines.

To see if Davis has changed his approach recently, we first need to look at how he started off the season. Here's a breakdown on what he threw in overall and in 2-strike counts before his DL trip: 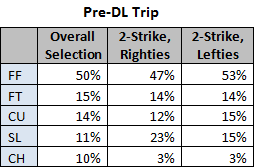 So Davis relied heavily on his slider as his out-pitch against righties, and he used both his curve and slider equally against lefties. Considering he couldn't get much success with his slider in the beginning of the year, this could be one of the reasons he struggled to finish batters off and get as many strikeouts.

And now, let's compare this to how he's done since returning from the DL: 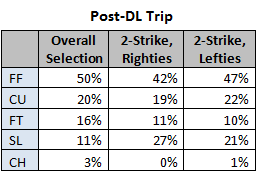 Davis has done exactly what Mitchell stated in his article: all but eliminated his changeup while throwing his curveball much more often. In particular, Davis is using his curveball in two-strike counts much more often than before, and he's using it as an out-pitch against lefties. He's also dramatically increased how often he's using his slider as an out-pitch against both righties and lefties, while throwing it less often in earlier counts.

I'd love to see Davis continue to use his curveball even more often, as I think it has the potential to be a valuable weapon for him against lefties. But overall, I'm encouraged by these results; it shows that Davis is learning as the year goes on, and he's truly attacking hitters now and being more aggressive. This isn't the same Wade Davis we started the season with, and hopefully this gives him a springboard to continue to improve going forward.