This is going to sound like an absurdly obvious statement but I don't think the words quite do it justice: Evan Longoria is really good at his job.

We have the chance to watch him every day and in my opinion we can under appreciate exactly what we’re witnessing. Sure, home town fans have a tendency to overrate the players on their favorite teams, but I feel the inverse can also be true. Maybe it’s not so much that we underrate him as much as we just…rate him. He’s been so good that we just accept it as an inevitability.

Right now he’s at 5.1 fWAR after missing 29 games, just a tick behind third base leader Adrian Beltre’s 5.2, who has also missed time. Kevin Youkilis is in a distant third place with 3.9 fWAR. Longoria’s WAR doesn’t seem so impressive when you look at the years of 7.5 fWAR he put up in ’09-‘10, but once you consider he missed time and played through pain and discomfort for quite awhile which affected his offensive numbers it looks much better.

In his four full seasons Longoria has accumulated 25.7 fWAR, second only to Albert Pujols’ 30.9 over that time. He leads second place by 5.7 fWAR. The only position with a greater gap between first and second is first base where Pujols leads Joey Votto by a full 8.0 fWAR. I broke the last 20 seasons out into four year chunks and over that time there have been seven seasons in which a third basemen had more fWAR than Longoria’s 25.7. 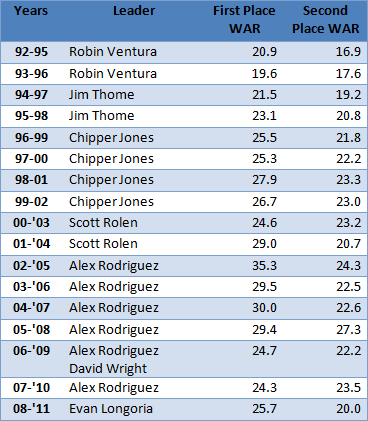 He has some very good company on that list with deserving Hall of Famers A-Rod, Chipper Jones, Scott Rolen and Jim Thome. Robin Ventura was an excellent player in his own right. Some of those totals come with certain caveats, though. Thome played third base from 94-96 but was a first basemen after that so his totals are infused with those numbers. Chipper spent the 2002 season in left field. A-Rod didn't play third base until 2004 so the first two years of his obscene 35.3 total shouldn't count. There's also the fact that he was taking performance enhancing drugs during his time with New York. We still don't know how much, if any, steroids actually help a baseball player's bat but his numbers have to be take with a grain of salt when comparing them to someone we believe is clean like Longoria.

When you also take into account that offense is being surpressed all over baseball it makes Longoria look that much better. Chipper Jones and Scott Rolen are the gold standard when it comes to offensive and defensive excellence at third base (A-Rod has never rated as a good defensive third basemen). Longoria has become their peer. A Hall of Fame career blossoming in Tampa Bay. That's something worth noticing.