Welcome back to This Week in Sun Sports, kids. As always, we'll be looking at the oddities of the Rays broadcasts from this past week. Anything from the announcing, to a crazy video segment, to the fans in the stands. If it's on Sun Sports, we see it. Because--like Agent Richard Gill in Hackers--we're always watching.

We begin today with something to cheer us up after staying up all darned night just to watch Scott Proctor get proctologist'd by Jacoby Ellsbury. We need something pure and true. Something that combines raw athleticism with the innocence of youth. Something that reminds us that while baseball is a game to be taken seriously, it is -- in the end -- just a game. 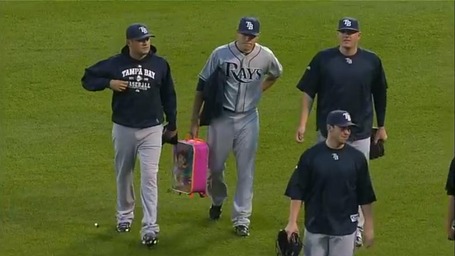 That's Matt Moore and his pal Dora heading to the bullpen after joining the big club in Baltimore. This mild form of rookie hazing is nothing new, we've seen several guys carry the seed bag, but this is special because: A) With the playoff race getting serious, there hasn't been too much goofiness to talk about in the past few weeks, and B) OMG, MATT MOORE, DID YOU SEE THAT SPOT START AGAINST THE YANKEES!?!?! 11K'S!!! 15 SWINGING STRIKES!!!! WOOOOOOOOOOOOOOO!!!!!!!!

If one is good, then two is nice at twice the price. 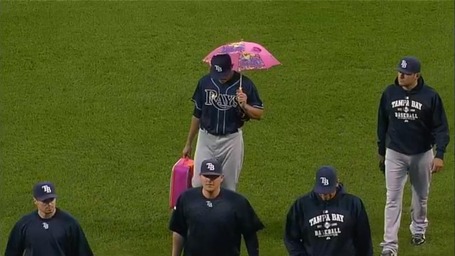 I see your Dora the Explorer suitcase and raise you a matching umbrella. While I find the hazing funny, part of me worries that this is management's call as a metaphor about player development. Is Sternberg not-so-subtly telling Moore that he is but a child in the eyes of ownership. If that's the case, then the 2016 Rays are going to be awesome.

Outdoor furniture, Ponzi schemes, and the passing of the parasol... after the jump...

You'd think David Price's dog Astro was a cat as many times as he's come back to life. Here he is bracing the cold, rainy conditions of Fenway Park: 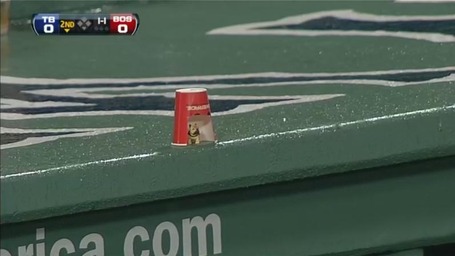 At first, you might think, "Wait, Astro is a superhero, why does he need to be protected from the weather?"

You must understand that that igloo-cup is not protecting him from the rain drops, rather it's a sound shield to protect him from the "AHHHHHHHHHHHHHHHHHH's" and "ohhhhhhhhhhhhhhhhhhh's" every time a Boston player hits a pop fly. As humans, we are aware that the Boston accent is perhaps the most vile sound on the planet, but remember that dogs can hear a wider spectrum of sound than we can. If we think that cries of, "Pahk tha cah in Hahvahd yahd," and "Youuuuuuuuk," are annoying, imagine the horror that Astro must endure. I bet it's all he can do not to rip his doggie-ears off.

In the eighth inning, BA had something to say about pinch hitter Ryan Lavarnway: 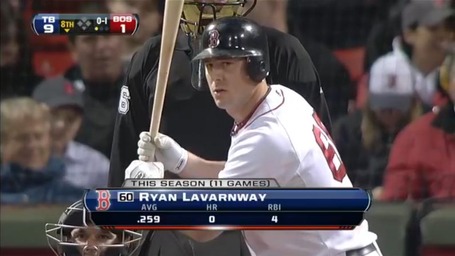 DS: And Ryan Lavarnway is going to hit in the place of David Ortiz, the DH.

BA: Lavarnway. Doesn't that sound like a piece of outdoor furniture? Like "I'm gonna have a little light lunch then go take a nap in the Lavarnway."

DS: I'm not really sure what Lavarnway is, but he's a pretty good sized guy.

BA: He is, he has the oversized Lavarnway. The California Lavarnway.

There was some talk about James Shields leading the Majors in CG's: 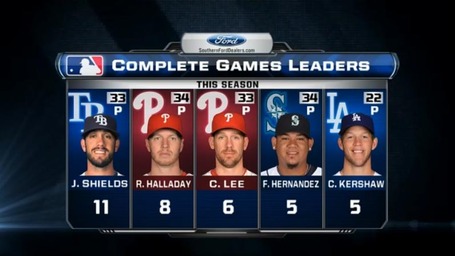 BA: It's all math. Science.

DS: It's a numbers game.

BA: It's a Ponzi scheme

BA is clearly shocked by the mass of complete games presented here, considering he amassed just 12 CG's in his 13 seasons in the Bigs. I'm sure the Mets wish that a Ponzi scheme was a cavalcade of Complete Games, because that would have saved them a ton of money (and perhaps finally gotten a no-hitter out one of them).

What a difference a week makes. Matt Moore is all grown up now that Alex Torres has joined the roster. 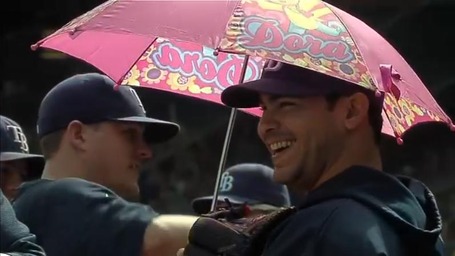 It's nice to see the bullpen give Moore the respect he deserves. After all, he's a man -- a burly, 98 MPH-hurling lefty. He doesn't need to trot out on the filed with a girly, kid's umbrella. No, he's going to strut out there like the man his is (h/t Collette): 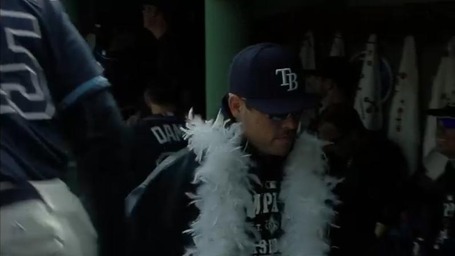 DID YOU SEE THAT YANKEE GAME THAT MATT MOORE STARTED? SO AMAZING. A GOD AMONGST MEN. 11 FRICKIN' K'S THROUGH 5 INNINGS!!! HE'S THREE PARTS RED BULL, ONE PART "DEAL WITH IT", AND ONE PART JURASSIC PARK THEME SONG! MATT MOORE!! WOOOOOOOOOOOOOOOO...

(Here's a link to Jurassic Park Theme song, in case you've started humming it in your head.)