Let's get this out of the way right now: The Rays beat the Yankees tonight, and the Red Sox lost to the Orioles thanks to some Ellsbury fail (h/t danielreese05). The AL Wild Card is now tied with just two games remaining in the regular season.

Big Game James Shields came with the good stuff tonight, winning his 16th game and coming within one out of his 12th CG of the year. He mastered a Yankees lineup that was more formidable than expected--Jeter, Granderson, Cano, Gardner, Martin, and Posada all started. The only player that got the best of Shields tonight was Robinson Cano who was two-for-four with a first-inning homer and an RBI single. Sheilds' line on the night was definitely Big Game: 8.2 IP, 2ER, 6H, 3BB, 4K. He had just six swinging strikes in his 117 pitches, but was able to get a few key double plays off the bat of Posada, and one fantastic diving, snow-cone catch by Desmond Jennings that robbed Jeter of extra bases. 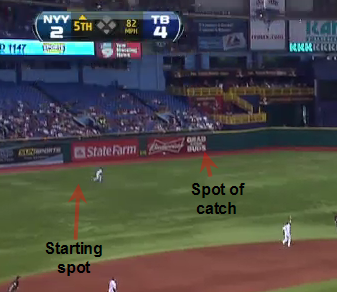 Once again, Hector Noesi made a short start, going just two innings, but this time the Rays were able to capitalize on both his and the bullpen's ineptitude and actually put a few runs on the board. B.J. Upton plated the first Rays runs on a two-RBI groundball double down the third place line. Reid Brignac touched home plate in a scoring capacity for the first time since September 9th, so he's got that going for him. Upton had a nice overall day, going two-for-four with two runs, two RBI, a stolen base, and some seemingly-pedestrian, but wholly-important outfield play. I'm going to gloss over his apparent brain-fart, lack-of-hustle in the first inning, because a win is a win is a win and I'm in good spirits.

Kelly Shoppach crushed a solo homer to left in the fourth inning on a 3-2 hanger from Raul Valdes. He also hit a towering flyout to the track that confused the cameraman more than Devin Hester in yesterday's Packers-Bears game. Shoppach has been good and toasty of late, with three homers in his last eight games. Hopefully, Shoppach has realized that that he can attack those pesky Yankee fans with homerun balls instead of bats hurled over the third base dugout. Though, with as many "Let's go Yankees" chants at I heard tonight, I wouldn't mind a few of those, too.

As always, Joe Maddon is going to get some flak for pulling James Shields just one out away from a complete game. Yes, CG #12 would have been nice, but the W is the number one thing that matters here, and if there's a number two, it's keeping Shields fresh for a possible game 163 start. Kyle Farnsworth got pinch-hitter Jesus Montero to ground out to third to end the game, so no big deal there.

Tomorrow at 7:10, Jeremy Hellickson takes on Bartolo Colon who will hopefully pitch like his surname and throw out a stinker. In Baltimore, the O's send out Zach Britton to face Erik Bedahd and hopefully put the screws to the Sawks. Both games start about the same time, so see you in the GDT.