In the latest biggest-game-of-the-season the Rays found a way to squeeze out yet another victory and maintain control of their own fate. The hero this time was Matt Joyce who, despite being a bit banged up, delivered the Rays' biggest hit of the season to date.

He had popped out in his previous three plate appearances, leaving two men on in the first and third and another on in the fifth, before coming to bat in the seventh. With B.J. Upton and Evan Longoria on base in front of him once again, Joyce faced former teammate Rafael Soriano. On the second pitch of the at bat Soriano left a cutter middle in and Joyce did what he's supposed to do with a pitch like that; crush it over the right field wall. That home run was set up by a tremendous at bat by Longoria one batter prior. It was a nine pitch at bat that saw Soriano throw his four-seam fastball, slider, and cutter to try and fool Longoria. Below is the heatmap of the tough pitches he fouled off to stay alive and draw the walk (image courtesy of Mark Simon of ESPN) 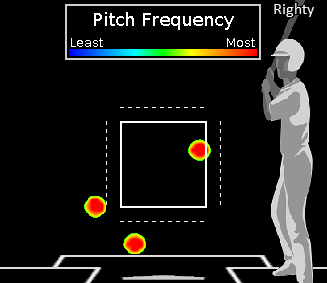 Joyce and Zobrist provided the offensive firepower for the evening, but the table was set by the work of Upton and Longoria. They reached base three times each and consistently worked deep into counts all night. Coming into the game Upton had a .434 wOBA and 1.8 WAR over the past 30 days while Longoria was at .391 and 1.6. They're hugely responsible for this amazing run the Rays are on. It brings back memories of the 2008 post season.

As good as Upton and Longoria were at the plate, Hellickson was bad on the mound. He only allowed three runs in his six innings but things could have been considerably worse. His fastball command was terrible. He threw 47 fastballs for a strike percentage below 50. When you're doing that you're obviously falling behind a lot of hitters -- he issued five walks -- and they end up laying off any fastball you throw until you prove that you can get it over the plate. In turn, that negates the effectiveness of Hellickson's best weapon; the changeup.

He worked out of a bases loaded jam in the third after giving up a home run to Russell Martin, and was aided by perhaps the biggest defensive play in Rays' history in the sixth. With the bases loaded and no outs and New York already having taken the lead on a Nick Swisher double, Hellickson got Martin to ground out sharply to third where Longoria quickly stepped on the bag, fired to second for the second out then on to first for the inning ending triple play. The throw to first just beat Martin who helped the Rays cause by diving into the bag. The play fired up the crowd and re-energized the team on the field. Even the usually stoic Hellickson pumped his fist and yelled as he walked off the field.