Yesterday, pitching coach Jim Hickey deked many of us into thinking Jeff Niemann would start Game One of the ALDS today, reporting such was the case over the radio beams. Well, the report proved incorrect, and now Future Legend Matt Moore will be greeting the world today at 4:00 with his winning smile and easy squeezy 97-mph cheese.

So where does that leave Niemann and Wade Davis? It appears the Rays have decided Davis will get the chance, having left Jeff Niemann entirely off the playoff roster. That may be the right choice, but it certainly is a harder choice than we might think.

It would appear, looking at Niemann's FIP since August, that he's certainly hit a major bump:

NOTE: I have calculated xFIP using Niemann's career HR/FB rate and a 3.2 constant.

So, Niemann finished the season with a Sonnanstine-esque 4.89 FIP, but it appears that has a lot to with an increase in homer runs -- and namely home runs per fly ball. In the first half of the year, he sported an 8.3% HR/FB -- he finished the last two months with an ungodly 18.6% HR/FB.

Well, maybe not. As we can see, his walks ticked upward 1.1% in the second portion of the season, and there is a legit chance those homer increases were not just random variations, but a sign of decreased control and pitch effectiveness.

(SIDE NOTE: His xFIP is rather good through those last two months. But xFIP sort of assumes that extra 8% of fly balls go for outs at a normal rate -- but if Niemann's pitches are getting crushed and those fly balls are really so-called fliners, then we can easily be looking at results far worse than his xFIP.)

A lot of those pitches overlap, but at the same time, we can see he's definitely missing that more vertical release. Here's a possibly more clear look: 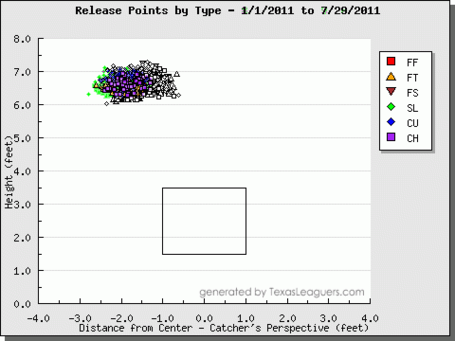 Not animation here. The colorless area is the early part of the season.

We have heard a million times from Hickey and announcers and talkative homeless gents that Niemann needs to drive the ball down in the zone, otherwise he loses the steep, downward angle that makes him a legit MLB pitcher. I believe that may be what we're seeing here.

Note how the release point slides over and the pitches all straighten out and cluster together.

It appears he's opening up (I'm not sure if that's the correct pitching term) and throwing "flatter" pitches that he can't control as well. This could easily increase his walk and home run rates until it's readjusted.

Add to that: Niemann has a tendency to get way worse as hitters see him a 3rd and 4th time -- a trait that once made J.P. Howell (peace be upon him) a far better reliever than starter. Niemann's career splits suggest he could make a rather strong two- or three-inning reliever:

When we put it all together, we see a pitcher with a possible (though fixable -- he's fixed it in the past) mechanical flaw who has never really excelled late in games.

Though Wade Davis has been much better in the second half of the season, Wade's never pitched nearly as well as Niemann this year:

NOTE: I calculated his xFIP using his career 9.3% HR/FB rate.

Worried yet? In the second portion of the season (NOTE: not the second half, but the final two months), Davis was at his best -- and his best was not even better than league average. The only bright spot of the Wade Davis side of things is his comparative stability. Plus, he's coming off an 8.0 IP, 2 ER game (6 K, 2 BB), which does not mean he will do well moving forward, but at least means he's healthy and mechanically sound (for the time being).

So it comes to the ultimate high-risk, high-reward or low-risk, low-reward scenario. If Hickey and Joe Maddon trusted that Niemann's delivery is sound and the recent homer and walk uptick was more aberration than prophesy, then Niemann would have gotten the nod.

But apparently, Maddon et al. found Niemann's approach questionable, and decided to forego making him a low-leverage reliever until it was certain he's okay. Either way, it was an unenviable conundrum.