Takin' A Peak Over The Fence At Wilson

Share All sharing options for: Takin' A Peak Over The Fence At Wilson

The Rays are back in the ALDS despite the odds. They're back facing the team that eliminated them the year before. Though this time, the tables have turned. Last year, the Rays were the favorites, winning more games than anyone else in the AL. They would host the Rangers who were seemingly peaking at the right time looking like the team no one wanted to face (especially in a short series). They had two aces, one of which was the best pitcher in the AL. The Rangers took the short series behind their anchor Cliff Lee who dominated the Rays. Their other top lefty, CJ Wilson, got the third win with a great 6-inning, 2 hit performance. The Rangers two lefties combined for 22 1/3 IP giving up only 2 runs while striking out 28 and winning all three games.

Things have changed, though. This year the Rangers have home-field advantage. Cliff Lee? He's back in Philadelphia, and the Rays don't have to worry about him unless there's a 2008 World Series rematch. The Rays are the team with Aces. The Rangers staff is still built on left-handed pitching with CJ Wilson as the anchor and Matt Harrison also likely to start. Fortunately, it seems the Rays have had more success this year against lefties. Last year the Rays' OPS splits versus RH/LH starters were .739/.729; this year, those numbers have reversed: .719/.735. While we've been better generally against lefties, we've still struggled against Wilson (2-0, 2.08 ERA/3.89 FIP). Wilson will start game one, and he'll probably get another start in the series if it goes 4 or 5 games; so let's take try to breakdown what he's doing.

As good as CJ Wilson was last year in his first year as a starter in the Bigs, he's been even better this year. All of his RA numbers have dropped nearly a half run from last year to this year: his ERA is down to 2.94 from 3.35, his FIP is down to 3.24 from 3.56, and his xFIP has dropped from 4.06 to 3.41. He's an excellent pitcher, and he'll be our toughest match-up. Wilson doesn't have sizable platoon splits either this year or last year, but there is some there. I'd expect that the Rays load the line-up with righties where possible, and the Rays have some guys who can match-up very well against lefties (Upton, Rodriguez, Longoria, Jennings).

So what does he throw? PitchFX credits him with three fastballs (two-seem, 4-seem, and cutter) along with a curve, slider, and change. Here's a breakdown of what he throws by batter-handedness:

As you can see, Wilson is very fastball heavy versus lefties with over 70% being one of his three fastballs (about 10% more than against righties). As we'd expect, Wilson throws his curve and change-up more against righties while working the slider in about the same amount against both hands. Let's see how that changes when he gets a hitter to two strikes (with less than three balls):

Wilson still is reliant on his fastballs in two-strike counts, but less. He also is still throwing one of them about ten percent more against lefties than righties. His out-pitch is clearly his slider as he throws it upwards of 30% against both hands when there are two strikes. Below is his slider usage by balls and strikes:

As you can see, almost half his sliders thrown are with two strikes. The count he's most likely to throw a slider is a 1-2 count. Building on that, here's a breakdown by count of what pitches he'll throw against each hand (this is a big, meaty table that could be a nice tool to bet with friends while watching the game): 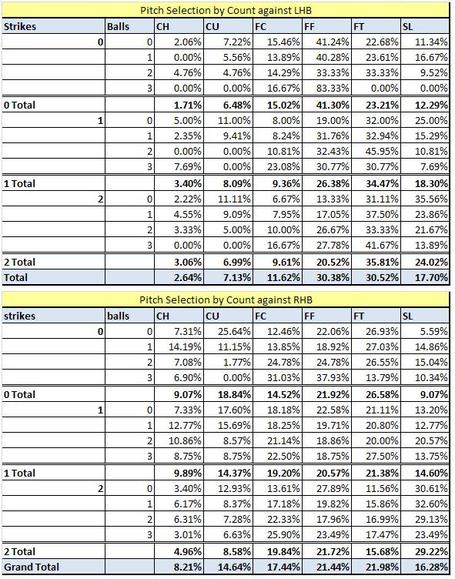 The last table I want to leave you with is what Wilson gets swinging strikes on. This table shows his swinging strikes a percent of pitches thrown for each pitch type and overall. This should give us an idea of which pitches he uses to try to get strikeouts with or which have the best stuff:

This absolutely backs up Wilson's usage of the slider with two-strikes. The fact that over 20% of the time he throws it against lefties he gets a swing and miss (and nearly 20% against righties) shows that his usage of it in 2-strike counts when a batter is expanding the zone is absolutely perfect (and scary).

CJ Wilson will no doubt be a tough opponent, but he is beatable. The Rays seemingly need to work to avoid being behind in the count where Wilson can use his phenomenal slider. Worst case scenario, we have to beat the other starters where we have the pitching advantage.