Rays And BABIP: James Shields Was Really, REALLY Unlucky In 2010

Share All sharing options for: Rays And BABIP: James Shields Was Really, REALLY Unlucky In 2010

Remember when James Shields was, like, terrible? And when the plebeian fan burned effigies of Joe Maddon because he included Shields in the playoff rotation?

Well, a lot of us here at DRB felt James Shields was really unlucky in 2010 -- we felt his batting average on balls in play (BABIP) had exceeded normal territory and crossed into unlucky. Well, we may have failed to anticipate how truly unlucky he was because, as it turns out, the 2010 James Shields was the only Rays starter with a BABIP over .320 in four years, if we disregard Mitch Talbot's 4-and-1/3-inning start in 2008.

Moreover, it has become increasingly apparent that the Rays' fielding emphasis has yielded the best starters' BABIP in the league since 2008: 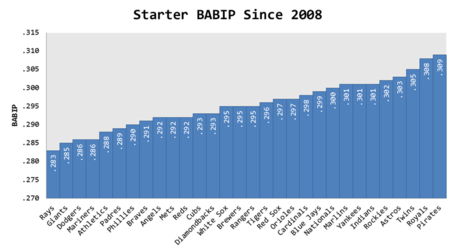 When we drill down and look specifically at the starters since 2008, we see a lot of pitcher out-performing their ERA (as in: ERAs lower than FIPs): 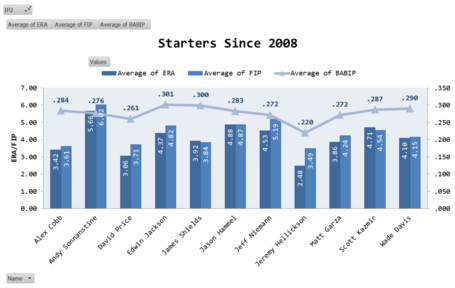 Basically, any starter that pitches a significant amount of inning for the Rays should expect a BABIP under .300. If Shields had a BABIP of just .330 in 2010, his BABIP over the last four years would have also been south of .300.

Why is BABIP so important? Behold it's strong relationship to ERA: 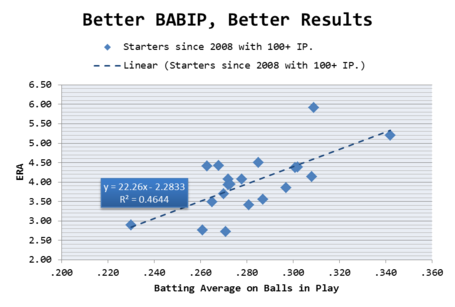 Now consider that in context with the great starters BABIP and tell me that isn't a thing of beauty.

Thanks to J. Collette for pointing this out.