Brandon Guyer had a break-out season in 2010 before being traded to the Rays in the Matt Garza package. Guyer was drafted in the 5th round out of UVA in 2007. Baseball America had the following write-up about him leading up to the draft:

Guyer played poorly in the Cape Cod League last year, and he ultimately could fall into the category of solid hitter without enough power for a corner or quickness for the middle of the diamond. The consistent hard contact he made for the Cavaliers this spring opened the eyes of scouts, however, and in a draft thin in college hitters, he had a chance to go off the board in the top five rounds. He plays the game with fervor and has an aggressive, all-out approach. He doesn't work counts and he will swing and miss often, but he has solid-average bat speed and an ability to lash line drives from gap to gap. He's a 60 runner on the 20-80 scale, but lacks the lateral quickness to develop into an above-average defensive second baseman, and his fringy arm strength plays best in left field.

We see the first mention of his plus speed and above-average bat speed. At the time of the draft scouts questioned his power and approach. Since then Guyer has answered on of those questions rather resoundingly: power. His power is quit good. His approach, on the other hand, is still frustrating at times. Even in Guyer's breakout 2010 he still only walked in 6.7% of his plate appearances (which nearly matched his professional high of 6.8%). This past off-season Guyer got the following reviews from scouting services:

An all-Virginia high school running back and linebacker who drew interest from college football programs, Guyer has solid power, plus speed and the best present outfield skills in the system. He's aggressive in all phases of the game, which hurts him at the plate because he makes contact so easily that he doesn't draw many walks. He knows how to use his quickness on the bases, swiping 30 bags in 33 tries last year. Guyer can play all three outfield positions, thanks to his speed and instincts. His arm has improved to where it's now average, and it's accurate as well.

17) Brandon Guyer, OF, Grade B-: A good athlete, has made good strides turning his tools into skills the last two years. Has speed, some power, could use better plate discipline.

The Good: Guyer has always brought good tools to the table; he has bat speed and gap power, with a smooth, easy stroke, good hand/eye coordination, and excellent contact rates. He's a slightly above-average runner who has stolen 60 bases over the last two years in just 70 attempts. Both his outfield play and arm strength are big-league quality.

The Bad: Despite his numbers, scouting reports on Guyer are far from glowing. His athleticism leaves him a bit short in center, and his power doesn't profile well for a corner. He's a very aggressive hitter who looks for fastballs early in the count, an approach that is often exploited by more advanced pitchers.

Guyer is a plus runner and defender in centerfield with good bat-to-ball skills but poor plate discipline. He mashed as a 24-year-old repeating Double-A, so he may be overrated on performance, but the tools are there for him to at least be a second-division regular because of the glove and speed.

Once again we see a few things over and over: good athlete, good fielder, good base-runner, too aggressive at the plate, and possible power.

This year Guyer furthered the breakout. His Iso stayed strong allowing us to project power, and he seemingly tried his had at being less aggressive at the plate (not surprising given the organization's philosophy). See the below table detailing Guyer's numbers in a few key areas for his minor league career, his career in the upper levels (AA-AAA), and his breakout the last two years:

The big thing here to me is his progression. Seemingly each season he's gotten better which bodes well for a guy whose tools are seemingly there. So what does Guyer look like? I think from his K%/BB%/Iso numbers we see a guy whose pretty aggressive at the plate with good contact skills and pretty good pop. Sound familiar? Using these numbers, I tried to model what a big league player that does what he does at the plate would look like.

The table below represents the players who fit the following query: played more than 500 career games with at least 75% of which were in the outfield, walked in less than or equal to 10% of their career at bats, struck out between 14 and 20% of their career plate appearances, and had an Iso between .175 and .220. All of these numbers fit in with what we see in Guyer's minor league statistical profile, but they may be a stretch given that you will sometimes (or perhaps frequently see a drop between minor league and major league numbers). 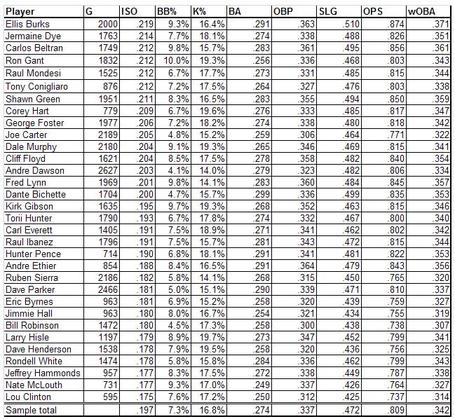 This is a pretty good list of sluggers that I'm sure we'd all be thrilled if Guyer can match many of their production. Looking at the bottom of the table for the sample total (more apropos may be "Sample average), we see what the average player from this sample looks like. It's eerily similar to Guyer's minor league profile (SHOCKING!). The k-rate for these players is a bit higher, as is the bb-rate; but they actually look very much like Guyer's 2011 season (17.8/7.9 K%/BB% and .209 Iso). Truthfully, I'd expect a slight uptick in BB% and K% as he transitions to the bigs and gains experience. His Iso could go either way in the Bigs, but a slight drop would be relatively reasonable. If we consider the sample's line and wOBA* to be a high-end projection of what we expect Guyer to do, then we can take a stab at projecting him in the big leagues.

We do need a baseline for league performance, though. In the past couple of years we've seen offense continue to taper as we get further and further away from the last expansion. Below is a table with slash-lines and wOBAs for the AL the last three years and a Marcels projection using these numbers (5-4-3 weighted average with the most recent weighed the highest):

Using this number for wOBA and what we can guess from scouting reports for his defense and base-running, we can get a very rough sketch of what exactly we can expect from Guyer. The table below calculates WAR for a high, medium, and low estimate for Guyer as a corner outfielder over the course of a full season:

In essence, we're potentially looking at 3.5-4.5 win outfielder whose performance at the plate will likely be highly driven by his BABIP and power output. That's a pretty darn good player, and I hope to see a lot more of Guyer crushing inside heat in to the seats that many players don't even think about getting around on**.

*wOBA for the purposes of this article is the basic Tango formula eschewing stolen bases and ROEs because that was a wrench I didn't feel like working around. Hence why we have a lower league wOBA than generally cited.

@r_j_anderson
R.J. Anderson
Love the slow-mo look at the swing here. If I didn't know any better, those quick hands belonged to Longoria: