Initial Thoughts on the Rays and RISP

Share All sharing options for: Initial Thoughts on the Rays and RISP

There is a scene in the movie Airplane where Steve McCroskey (played by Lloyd bridges) hands a weather report to Johnny (played by Stephen Strucker) and asks, "Johnny, what can you make out of this?" to which Johnny replies, "This? Why I can make a hat or a brooch or a pterodactyl."

Earlier this week td32 (Toby David) in the "Complete Game James' Does it Again, Rays Beat Rangers 5-1 game recap made an interesting observation about the Rays 2011 season:

The biggest problem for the Rays this season...

This one point made me think about how important the Rays lack of hitting with RISP has been and ask myself whether or not the lack of hitting with RISP is the main reason the Rays are not battling New York and Boston for 1st place.  As I collected my data, I reached the conclusion that the data could be made into a hat or a brooch or a pterodactyl. The data required further mining and evaluation before any meaningful evaluation could be conducted.

Sandy Kazmir (Jason Hanselman) made an interesting comment yesterday in BWoodrum's story Rays and BABIP: James Shields Really REALLY Unlucky in 2010 regarding further study of a set of data on other Rays starting pitchers.

I can take a look in the offseason

I think I do my best work then because the data is frozen giving ample time to do a solid look before it changes again, even if the changes are minute.

Along these same lines I will present the data that I collected when trying to determine the overall effect that the lack of hitting with runners in scoring position has had on the Rays winning in 2011. I also wanted to look at assumed truths which were 1) batting average is a poor measure of hitting ability and 2) there really isn't such a thing as a "clutch" hitter.

The table below charts the Rays performance with RISP compared to the league average from 2008 through 2011. Of course, the logical argument is that a team that takes advantage of their scoring opportunities will have a better chance of winning than the team that fails in those situation. Unfortunately, the 2008 Rays gave me reason to pause. Were the Rays unique in playing .600 baseball while finishing last in the AL in average with RISP? How correlated is hitting with RISP and winning baseball?

Batting average is said to be a poor way to judge a hitters ability but in Tom Tango's The Book he states that we should "expect a player's performance in an upcoming clutch at-bat to be much more like his overall performance than his past clutch performances." With this in mind, I decided to examine the Rays roster and look at how players have performed with RISP (30 PA minimum). As an initial step I looked at batting average and in order to capture the on-base and slugging skills for each hitter I tracked OPS. The data is presented in the table below: 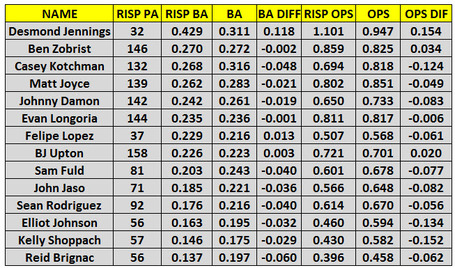 When examining batting averages with RISP, it makes me wonder if the key to hitting better with RISP position is to have hitters who naturally hit for a higher batting average? There are many many different statistics to examine clutch performance. Which set of statistics will best be utilized to determine how an individual performance with RISP correlates to a team winning baseball games?