Edit: After some interesting arbitrary endpoints tweeted by Mark Simon at ESPN, I've rethought my classifications, and changed them around a bit. The result is more four seam fastballs at the result of two seam fastballs and cutters.

As everyone knows by now, the New York Yankees traded their best young hitter in Jesus Montero to the Seattle Mariners for one of the best young pitchers in the game, Michael Pineda. If the rookie of the year award is intended for the pitcher who displayed the best true talent, it should have been Pineda. He's really good. In 2011 he struck out 9.11 batters per nine innings, and walked only 2.89. He does have some flyball tendencies (only a 36.3 GB%) which won't play well in the new Yankee Stadium, but let's not get carried away. A 3.36 SIERA plays well anywhere. He's only 22, so Rays fans may as well get to know him, as we'll be seeing him a lot over the next decade.

I've heard some people say that Pineda only has two pitches. I understand why they think so, but they're wrong. He throws a slider, and then he throws other things. These other things have big time rise or fantastic sink. They can have over 10 inches of run, or be completely straight. And they range from 86 mph to 98 mph, with very little clumping. It's not one pitch, but what is it (The MLBAM algorithm is confused on this, too)? Without any knowledge of what Pineda says he throws, I went with a four seam fastball that averages 94.8 mph, a two seam fastball at 94.1 mph, a cutter at 93.7 mph, a changeup at 87.6 mph, and of course the slider at 84.0 mph. Here is the movement of those pitches: 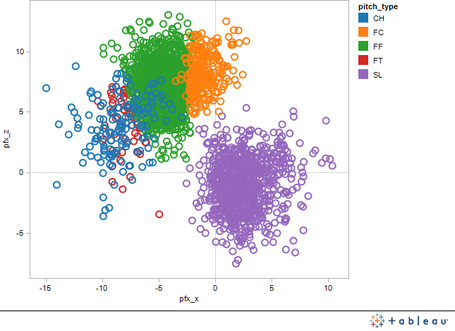 Pitch f/x data from Joe Lefkowitz. All other data from Fangraphs.

First off, here is Pineda's pitch mixture. His slider is his best pitch, and he throws it a lot. There are some concerns that heavy slider use makes a pitcher more injury prone. Don't take my numbers as meaning that he throws it more than his fastball, though. If you combine my three types of fastball (and my classifications are painfully far from gospel), you get 61% fastball, 30% slider, and 8% changeup. His changeup is a work in progress, but I wouldn't write it off (remember, he's only 22). Despite Pineda's flyball tendencies, the changeup actually got 51% ground balls when it was put in play last year (the slider 49%, the fastballs all under 30%).

Here is how Pineda used his pitches against right handed batters:

As you can see, Pineda largely leans on his slider down and away, and his fastball away, often up. He rarely uses the changeup to righties.

And here is how he used his pitches against left handed batters:

There's a steady diet of slider down and in, fastball up and away, and the changeup gets mixed in down and away.

Pineda is a fantastic pitcher already, and it's scary to think how good he can get if he stays healthy. He has very good control overall, but lots of room for improvement on his changeup. I wouldn't be surprised to see his fastball become a better pitch as well, especially if he starts working it in on the hitter's hands a bit more. Enjoy him, Yankee fans. Luke Scott and Matt Joyce might, but B.J. Upton, Sean Rodriguez, and we Rays fans probably won't.