J.P. Howell's Journey Includes The Good, The Bad, & The Ugly

Share All sharing options for: J.P. Howell's Journey Includes The Good, The Bad, & The Ugly

J.P. Howell established himself as a major league relief pitcher in 2008 and 2009, suffered a torn labrum and missed the 2010 season, and returned to the mound in 2011 but was unable to return to his 2008/2009 form and was involved in some very memorable moments but for the wrong reasons. According to an interview with mlb.com's Bill Chastain Howell is looking forward to spring training. He delayed his offseason training:

"I needed that month to mentally shut down and start my new process for the new season and create a new journey to chase a ring," Howell said. "It was good to kind of finalize my rehab trail, in a way - mlb.com

The question remains if J.P. Howell's problems in 2011 were a direct result of not having the mental fortitude to handle adversity, lack of command in his pitches, or hitters figuring him out. Howell himself believes a combination of things hurt him in 2011:

"It's one of those things where I know the fans don't get to see -- no one really gets to see -- the true path from going to rehab to pitching in the games," Howell said. "It's a little different than having an offseason to prepare and getting my body into great shape and pretty much make it a machine. I have the luxury to do that this offseason, which is going to be a big benefit for me." - mlb.com

"I want to be a pitcher [who], when I feel I'm not getting the calls, I still get outs. I get squeezed on two pitches and I still get the guy out. I don't want to have a thousand excuses, like in that St. Louis game. That's an excuse to fail, and that's not good enough in the big leagues. My arm was strong, but mentally, I was very weak." - mlb.com 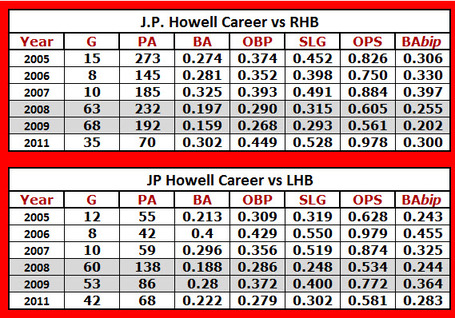 Everything was going right for Howell following the 2009 season. He had established himself as a major league relief pitcher capable of assuming the role of closer if required, got married and went on an exciting honeymoon in Bora Bora, and signed a $1.8 million contract (avoiding arbitration). Unfortunately, the good vibes that the dude had achieved on the baseball field took a turn for the worse beginning during spring training in 2010.

When Howell showed up for spring training he began to experience weakness in his left shoulder and had to be shut down and visited team orthopedic doctor Koco Eaton. The prescription at the time was rest in conjunction with therapy. J.P. & the Rays were encouraged by a strength test and scheduled a simulated game at Tropicana Field on May 17th. Unfortunately, the throwing session lasted all but 12 pitches and J.P. walked off the mound and left the stadium without talking to reporters. He immediately traveled to Birmingham, Alabama to see Dr. James Andrews who performed surgery to repair a torn labrum on May 19th. Howell began the long road back but was determined to make it back to the Rays in 1 year.

He didn't have any setbacks during his recovery and worked out with the Rays in April of 2011. After his workout at Tropicana Field he reported to High A Port Charlotte where he made 3 appearances before going to AAA Durham for 4 more appearances.

Finally, on May 20, 2011, nearly one year to the day after surgery and 685 days after his last appearance in the majors, Howell stepped on the mound and worked a scoreless inning against the Florida Marlins. This return to the mound and the scoreless inning would be the high point for the remainder of the season for Howell.

The next four appearances for Howell set the tone for the remainder of the 2012 season. He worked 2.1 innings, faced 18 batters, gave up 10 hits, walked 2, surrendered 10R/7ER, and had an ERA of 27.00. His frustration mounted and was on full display after surrendering a home run to Lance Berkman after a blown strike call by the home plate umpire.

The emotional toll of the season of the 2011 season was never more apparent than on the evening of September 13th in Baltimore. The Rays were 3 games behind the Boston Red Sox in the AL Wild Card chase and were tied with the Orioles in the bottom of the 8th. Howell had retired the first two batter but gave up a sharp single to Vlad Guerrero who was pinch run for by Adam Jones. Howell seemed distracted by Jones and grooved a fastball to Matt Wieters and fell to one knee on the mound in disappointment.

As we know the Rays did win the AL Wild Card and Howell. was on the post-season roster. He was summoned from the bullpen in Game 3 with the Rays trailing 2-1, the bases loaded, and Josh Hamilton due up. The ultimate chance at redemption was presented to him but like so many ugly moments during the 2011 season he was unable to escape damage and surrendered a 2-run single.