I caught up briefly with Rays 2011 2nd round draft pick Lenny Linsky after workouts at the Rays Winter Development Program on Wednesday. He discussed his experience at the camp, how he is preparing for the 2012 season and how he tries to approach pitching.

John Gregg: What are some of the things you’ve been working on here at Development Camp and how has your experience been so far?

Lenny Linsky: The experience has been great. It’s been a real cool thing they put on for us. I feel honored just to be around all these great players and these great coaches. It’s been cool. There has been a lot of conditioning, working out, and just getting out to the public and meeting people. We went to MacDill yesterday, had a great time, and we want to thank those guys for their service over there. Today we’re going to a Boys & Girls Club, should be a great time as well.

John Gregg: Other than coming to Development Camp, what are some of the things you’ve been doing this off-season to prepare for Spring Training?

Lenny Linksy: I’ve been doing the workout program they assigned to us at the end of the season. I’ve also been surfing every day. It’s been a big part of my workout regimen and everyone makes a joke around here, but I really enjoy it. It’s a great time.

John Gregg: I’ve only surfed a couple of times, but it beat the heck out of my body, so I don’t think these guys know exactly what a workout you get.

Lenny Linsky: Yeah, they’ve been like "Really? You do surfing? Does that even work?" It’s a tough workout. Me and my best friend, Dino, back home we go out for 4-5 hours at a time and just stay out there. It’s a really good time.

John Gregg: When do you actually start throwing?

Lenny Linsky: I started throwing on Monday. Today was our second day throwing, so just came back into that. It’s a real nice feeling to throw again, it’s been a while.

John Gregg: So you obviously were a closer in college, is that kind of the role that the Rays envision for you in the future, out of the bullpen?

Lenny Linsky: To be honest, I have no clue what they want me to do. I’m just going to do whatever they tell me to do. I love closing, but whatever they’ll need me to do, I’ll do.

John Gregg: You guys all went to a hockey game last night, have you seen hockey before?

Lenny Linsky: Yeah the Tampa Bay Lightning game, it was unreal. My dad played hockey in college. He’s from Boston, so he grew up a Bruins fan. But I got a Tampa Bay Lightning jersey with my name and number on the back. It was pretty cool. It was a great time. 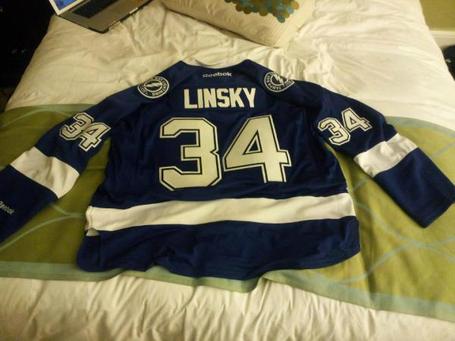 John Gregg: If you had to give a brief scouting report on yourself, in terms of what kind of pitches you throw....

Lenny Linsky: I mean, I don’t like bragging or anything like that, but I’m just a sinker/slider guy. I’ll attack with my sinker then my put-out pitch is my slider.

John Gregg: You do get a lot of ground balls - with the sinker for the most part. I looked at your numbers in college, and it’s pretty much well over 50% of your outs were ground balls.

Lenny Linsky: Yeah, I’ll try to get the groundballs, and then if I get two strikes I’ll try and get the strikeout with the slider. But I try and get guys out early just to save the pitches. It saves your arm.

John Gregg: Have they been working with you at all on your mental approach to pitching at all here?

Lenny Linsky: My mental approach is a little different. I’m kind of a high energy, kind of intense kind of guy. When I got to Hudson Valley, I was screaming a lot on the mound like I did in college. So they wanted me to tone it down a little bit. Have a little more controlled rage on the mound I guess.

Lenny Linsky: Just how to be a professional, how to conduct yourself. Tino Martinez came in and gave us a great speech and it was really cool hearing from him. He’s just a great player. So I’ve been doing that and just the training part of it. For pitchers we pound our legs - legs, back, and core. So when I get back home, I’m going to start working on that real hard.

Linsky has recently joined Twitter and so far seems to be having a great time with it. He appears like he might be a must-follow for Rays' fans. Thus far he has posted pics of him surfing and has been interacting a lot with fans. You can follow him at @alohalinsky34