Who Has The Better Rotation: Rays or Yanks?

Share All sharing options for: Who Has The Better Rotation: Rays or Yanks?

After the Yankees acquired Michael Pineda and Hiroki Kuroda, I nearly tweeted out something along the following lines: "Congratulations, Yankees, you now have the second-best rotation in the AL East." Upon further review, though, I decided to hold off. While I really wanted to claim that the Rays still have the best rotation in the East, I didn't want to make the mistake of underrating Pineda or Kuroda in the heat of the moment.

So to go about answering the title of this post, I decided to enlist the help of preseason projections. The ZIPS projections still haven't been released for every team, so I took the average of the three projections available on FanGraphs: the Bill James, Roto Champs, and the Fan projections. Two of these projections tend to be optimistic like woh, but by using the same standard of comparison across both teams, theoretically that should balance out. 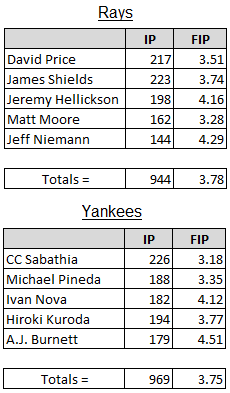 So if you view these numbers as a general estimate, the Rays and Yankees have a similar talent level in both their rotations, although the Yankees have a slight advantage in Innings Pitched due to Jeff Niemann's injury history and Matt Moore's youth. There are a number of caveats to these projections, though.

If nothing else, the Rays edge out the Yankees in upside. While both rotations project around the same, it's not exactly a stretch to think that at least one of Price, Hellickson, or Moore could break out this year. Meanwhile, the Yankees could get big years from Pineda or Nova -- and maybe a bounce-back from Burnett? -- but I still think there are more questions about them than about the Rays' young trio.

Anyone else out there already excited for the first Pineda-Moore matchup? The season can't come soon enough...