In 2011, we presented a three-part-series about a new stadium proposal for the Rays that generated a lot of excellent discussion from a variety of parties. Since principal owner Stuart Sternberg and St. Pete mayor Bill Foster are scheduled to meet tomorrow for a discussion on the situation, it is probably a good time to review some of the most recent news related to the topic.

This is the most recent development in the process. It is important to note two things from this article. One, there are no tax dollars affiliated with this resolution at this time, but at least it on record. The engineering group that made its presentation to the city put the price tag on the proposed plan between $1.5-1.7 billion dollars but also estimated a potential $4.2B return on investment for it. Secondly, and most important to any stadium talk, the council is willing to look at a solution that goes across the Howard-Frankland bridge and into downtown Tampa as shown in the map below. 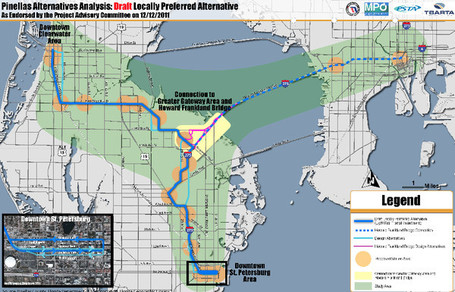 Before getting too excited about this project, you may want to investigate what has happened to a similar effort in Detroit. Still, it is nice to see yet another step toward improving the public transit situation in the region which, in its current state, it of no help to getting fans to Tropicana Field. To view the entire Preferred Alternative Alignment plan, click here to see the proposal.

A Win-Win For Both Sides of the Bay

Over the weekend, Stephen Nohlgren of the Tampa Bay Times ran a perspective piece on the stadium talks. It is an excellent piece full of proposals that show how constructive conversations on the stadium situation could play out moving forward. That said, these are not new thoughts. In fact, one of the readers of our original series emailed me in early July and stated the following:

As a St. Petersburg resident I would want Mayor Foster to get the best deal possible A previous St. Petersburg Times article gave buyout valuations in the $145 to 235 million range. A creative settlement approach rather than a straight cash approach may give the best long term return. Here is what I would like to see as a proposal:
Spring training used to bring tourists to St. Petersburg and it could again. The Tropicana site could still be redeveloped as in the proposals the Rays originally made and could be back on the property tax rolls. In the long run, I think St. Petersburg would benefit economically. It would be sad to see the Rays leave but if they are going anyway it makes sense to have them stay in the area and still get the most out of a buyout.

Eery, huh? I wholeheartedly agree with him that the Al Lang site could once again become an attractive facility for Spring Training, but just not for the Rays. They have the excellent facility in Port Charlotte that they also use during the Florida State League season and abandoning the site for Spring Training purposes makes little sense. However, the Washington Nationals would make an ideal fit for the area. They currently train in Viera as an isolated member of the Grapefruit League that has to travel at least one hour to play any other team in the league now that the Dodgers are no longer in Vero Beach. The facility is a dated one that offers little shade from the Florida sun for games and aesthetically lacks what other stadiums in the Grapefruit League offers.

Al Lang has a long history of spring training throughout the years and reviving that history, even with another team in the area, would help the local economy as fans flock in for what has the potential to be a very exciting franchise to follow in the coming years with the talent Tom Lerner and his ownership team are acquiring.

Lightning Approached About Deal in Channelside

We learned on Saturday that Lightning owner Jeff Vinik was approached about joining a group looking into purchasing the Channelside Entertaining Complex area, an area near the one we targeted in our stadium proposal situation during part one of the series. The article mentions the ridiculous scuttlebutt from 2011 that Vinik would buy the Rays thus allowing Sternberg to purchase his hometown Mets, but such a move would open up some other possibilities. The area could be further developed by that investment group and all of that area abuts the lot that Tampa mayor Bill Buckhorn would like to see a stadium built on (see red X; black X is Vinik-owned lot). 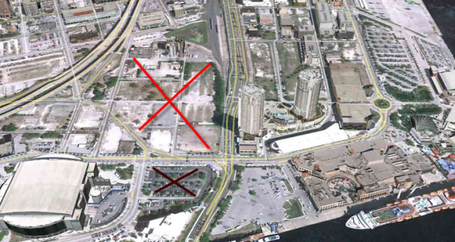 A thought I had yesterday in discussing this with project partner Josh Frank: Vinik offering a share in ownership of the Lightning to Sternberg for a share in the Rays ownership? It would show a commitment to the area and allow two successful people to combine their strength for the betterment of both teams and the bay area.

Remember the e-mail from the fan earlier? In a later email, he frames the discussion that Sternberg and Foster are going to have quite nicely.

Dear Jason:
I am writing for your help. Some years ago I bought a house. It was a great deal and I only paid $70,000 while others were paying anywhere from $158,000 to $660,000 for the same type house. Unfortunately, my house is next to an airport. I keep complaining to the airport authority about the jet noise but they refuse to do anything. What should I do? Sincerely, Stu
Okay, that’s not really my problem but with the renewed complaints about attendance it illustrates the Rays issue. Look at some of the sale prices for MLB teams around the time Sternberg took over the Rays:
$323 million Cleveland Indians - 1999
$660 million Boston Red Sox, - 2002
$391 million New York Mets - 2002
$158 million Florida Marlins - 2002
$184 million Los Angeles Angels - 2003
$430 million Los Angeles Dodgers - 2004
$270 million Cincinnati Reds - 2005
$223 million Milwaukee Brewers - 2005
$180 million Oakland Athletics - 2005
$450 million Washington Nationals - 2006
$450 million Atlanta Braves - 2007
Stuart Sternberg paid $65 million for a 48% stake in the team in 2004. In 2005 he reportedly paid another $5 million to gain control from Naimoili two years earlier than planned. The same Rays attendance issue that Sternberg is now griping about was probably factored into him getting control of the franchise so cheap.

It comes down to the fact that there is going to have to be give and take from all sides if anything is going to happen moving forward. Sternberg and his team were willing to put forth $150M toward the 2009 stadium solution plus cost overruns on the project, but that was something that was to be built within Pinellas County. The thought of moving the stadium outside of the county borders adds another level of complexity to the discussion. In the end, the give and take will likely come down to Foster and the city backing down from their justified stance of enforcing the lease on record while insisting the Rays open up their financial books. Given the fiasco that developed in Miam, this seems to be an unavoidable event.

Sternberg and Foster are at least sitting down to have conversations tomorrow, this is something that it is bigger than the both of them.Baseball is watching, the bay-area community and the fans within it are also watching hopeful that the two sides come to amicable agreement that is indeed a win for the entire bay area as well as the future of the Rays.