Why Do We Care About Batting Average?

Share All sharing options for: Why Do We Care About Batting Average?

I've come up with a new, extremely complex statistic that I think will revolutionize baseball.

Let me go over how to calculate this statistic. Bear with me for a moment folks because it gets a little messy. First, you look at all the times a hitter comes up to bat. Give the hitter one point for every time they get on base by hitting the ball, except if the scorer feels like the fielder *probably* should've made the play (they get a point if the fielder is too lazy or inept to make it to the ball on time though). That's right, this statistic gives equal credit for home runs and singles, even though about 70% of the time a batter hits a single, he won't score, but a home run guarantees one run at minimum. We also don't give hitters any points for walking, because frankly, it's boring to watch, and who wants to tire out opposing pitchers and create run scoring opportunities anyways?

Then we divide the number of points accrued by the number of opportunities a batter has to get points, except we ignore some of these opportunities. Walks didn't count for anything at the beginning, so there's no reason to start counting them now, it's just easier to pretend they didn't happen. We WILL, however, count errors as opportunities, because even though the hitter succeeded in every way by getting on base, advancing runners, and not making outs... well we'll still hold it against them. If the hitter gets out but advances a baserunner, then we also don't count it as an opportunity, but only if the hitter did it on purpose, or if it's a fly out that leads to a run scoring. Ground outs that "accidentally" lead to a run scoring count as opportunities. The scorer will judge how pure the batter's heart was to decide if it was intentional or not.

Now to calculate this ground-breaking statistic, we divide the number of "Points" by "Opportunities". I shall call this "the batting average".

What's "batting average" good for? Well, I'm not positive to be honest. It sure as hell isn't a simple statistic like OBP (Times on Base/Times Batting) or homers (number of home runs). It's an absolutely lousy indicator of offensive ability, given that our Tampa Bay Rays scored the 3rd most runs in the league despite the 2nd worst batting average. The 2nd best batting average in the league went to the Kansas City Royals, who scored the 4th fewest runs. Or, for those of you who prefer more than anecdotal evidence, here's batting average weighed against other simple, easy to calculate offensive measures based on how well they've predicted a team's runs scored the last five years. 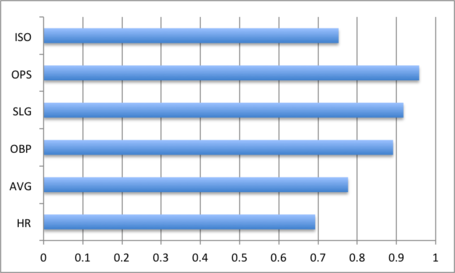 Well gee. It looks like it's better than looking at a hitter's home runs and ignoring everything else, barely. Good to know it beats considering just a small fraction of a hitter's outcomes. It's also a hair ahead of its cousin ISO that ignores a similar number of statistics, but at least ISO can claim to be a somewhat crude measure of power.

I'm not sure what similar claim batting average can make. It's not like it measures advancing of runners, because it treats singles and homers the same. Slugging percent is a much better indicator of that. It can't measure ability to keep the game going or providing run scoring opportunities (avoiding an out) because it completely ignores walks, errors, and a host of less common situations. On-base percentage is what we're looking for there. For every single thing we desire from a baseball statistic (simplicity, evaluating a specific ability, evaluating overall performance) there are measures that are indisputably better in every way.

One of the many complaints around the area about Carlos Pena -- and the Tampa Bay Rays as a whole, for that matter -- is that his batting average is low (looks like my statistic is catching on already!). I'm just not sure why I should care.