Share All sharing options for: Get 'Em On, Get 'Em Over, Get 'Em In

Baseball can be a very simple game. Get on base, move into scoring position, and eventually score on a base hit, sacrifice fly, fielders choice, whatever. In 2011 despite having the second lowest batting average in the American League (see Why Do We Care About Batting Average) the Rays were able to draw the 3rd most walks (571) to end up ranking a respectable 6th in the league in OBP (.322).

The Rays hit into the second fewest double plays in the American League (101) and led the league in stolen bases with 155. These two factors may have played a role in the Rays having the 6th most plate appearances with RISP (1688) and the 3rd highest percentage of overall PAs with RISP (27.44%).

Unfortunately, the Rays didn't take advantage of the opportunities and were only able to score 508 runs which ranked 9th in the AL. Additionally, with RISP the Rays finished 13th in batting average (.224), 12th in OBP (.322), 12th in SLG% (.371), and tied the Red Sox for the league lead in striking out. They also had the leagues lowest BABIP at .256 and finished 12th with an sOPS of 89. 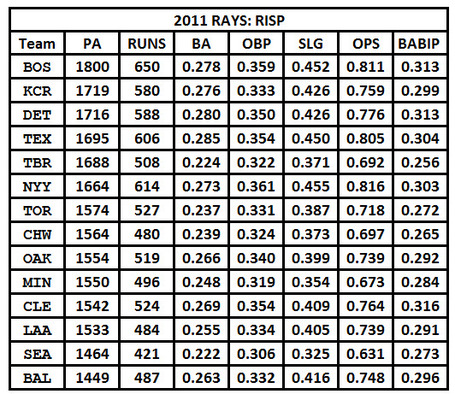 Here is the Rays data for players with over 50 PA with RISP in 2011 (sorted by OPS). Keep in mind that data for RISP is being presented not necessarily to forecast what may happen in 2012 but to reflect on what happened in 2011. But since there is a theory that a players career numbers with RISP will closely match their overall career numbers the Rays can feel good about having Evan Longoria, Ben Zobrist, Matt Joyce, and B.J. Upton returning to the lineup in 2012. 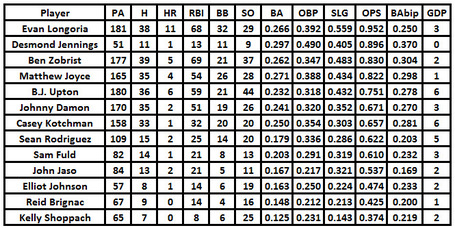 And here is the list of players including their tOPS and sOPS values with RISP: 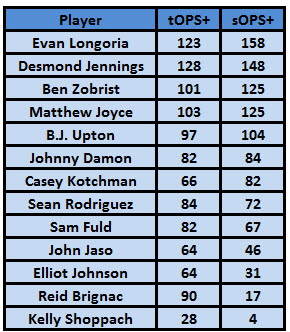 The Rays failures to hit with RISP was one of the few negative story lines in what turned out to be a fantastic season. Their problems with RISP position short circuited many rallies leading to many games which the Rays offense scored 2 runs or less.

They were shut out 15 times which tied them with the Oakland A's for 2nd in the AL behind only the Seattle Mariners who were shut out 16 times. They were also held to 2-runs or less 52 times and were 4-46 in those games. The only teams that were held to 2-runs or less more often were the Chicago White Sox (53), Oakland A's (59), Minnesota Twins (59). and the Seattle Mariners (68).

The struggles to score runs began in the first series of the season as the Baltimore Orioles swept the Rays and held them to 1 run on 4 hits in all three games. Over the first 9 games of the season the Rays were held to 1 run a total of 6 times. Outside of the month of May the frustration of the 2-run or less game was spread out over the entire season. 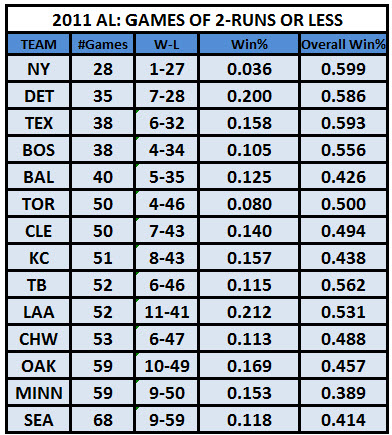 If the Rays are able to increase their scoring, and hitting better with RISP will certainly accomplish this goal, in tandem with the Rays pitching staff the Rays should find themselves once again playing baseball past the first week of October.