Share All sharing options for: BJ Upton and Left-Handed Pitching

Please welcome aboard our newest site writer, mr. maniac! He's been a member here for a few years, and his writing and analysis in his recent FanPosts made him stand out. So if anyone out there wants to write for the site, keep it in mind that FanPosts are an excellent way to make your case. ~Slow

In the game of baseball, there are certain "things" (cliches, perhaps?) that are simply supposed to happen, more so than in any other sport. For example, left-handed pitchers are supposed to get left-handed hitters out quite easily. The corner infield spots are supposed to provide power. First basemen are supposed to be players whose paychecks come almost solely from their bat. Occasionally, these little sayings are violated and confusion occurs! However, for the most part, these things simply happen.

This is where B.J. Upton arrives on the scene. One of the common assumptions floating around in the sea of baseball thought is that right-handed hitters are supposed to hit left-handed pitching well. Upton had always fit this bill. That is, until 2011.

The term "potential" is often tossed around in sentences with Upton. After all, doesn't Upton have indescribable potential? And didn't he give fans a glimpse of that in his 2007 season? Unfortunately, the odds that Upton repeats his 2007 year are slim. His BABIP in 2007 was .393 -- yes, .393 as in .093 higher than what is considered normal. To put this in perspective, when Upton put a ball in play in 2007, those drives went for hits 31% more often than they should have. So while Upton is certainly a toolsy, high-potential player, he has yet to give us fans much of a reason to believe he will have a 138 wRC+ (.894 OPS) again unless he gets extremely lucky. Or is it possible BJ Upton has given us a reason to believe and we are overlooking it?

I'm sure your heads are swirling in confusion right now. After initially talked about baseball's cliches, the conversation abruptly changed to BJ Upton's overall batting numbers and his potential. The following chart should hopefully connect some dots: 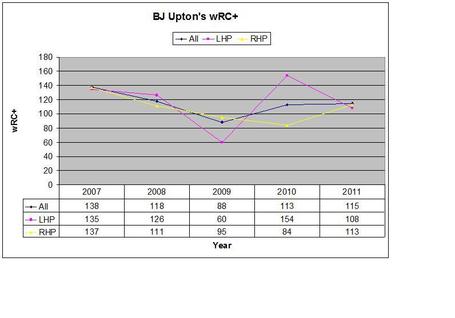 wRC+ is an all-in-one offensive stat. 100 is league average, so anything above 100 is above league average and anything below 100 is below league average. wRC+ is also park adjusted. For more on this stat, click this link.

So what do we make of this madness?

In 2007, BJ Upton was very lucky as shown by his unsustainable .393 BABIP. However, when looking deeper, it appears that most of Upton's luck was coming against RHP as evidenced by his .414 (!) BABIP against them. So in reality, BJ Upton was better against LHP than against RHP, if luck was factored out. This makes sense as right-handed hitters generally hit left-handed pitchers better than they hit right-handed pitchers.

In 2008, Upton had a pretty normal year when it came to splits. He actually hit RHP fairly well and he continued to hit LHP. The numbers here appear to be fine.

It makes sense to ignore (or not concentrate on) 2009 because it was a dreadful year overall for BJ, and a year in which he struggled from the shoulder surgery he had in the previous offseason. When looking at the numbers, 2009 was a wasted year for Upton.

In 2010, Upton returned to form, once again hitting LHP better than RHP. He had his worst year yet against RHP, struggling particularily against their fastballs.

Now here is the strange year. Upton progressed immensely against RHP (from 2010's form). However, he really struggled against left-handed pitchers, which is odd given his career trends and the simple fact that he is a right-handed hitter.

So why did BJ Upton struggle against LHP in 2011? A quick look at BABIP shows that the luck dragons didn't interfere with Upton's season(.283 BABIP against LHP). However, his power numbers show another story. 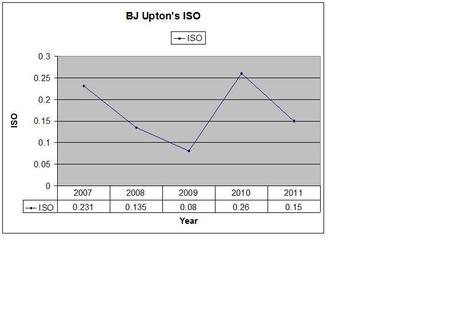 The numbers displayed above are vs. LHP.

The answer to BJ Upton's struggles against LHP in 2011 are now obvious: he wasn't hitting for power against LHP in 2011. Sure, his batting average dipped, but his power was the main component that turned south. It seems fair to conclude that Upton just wasn't driving the ball versus LHP.

Quickly glancing at the numbers can give the impression that Upton never hit for power against LHP. It is crucial though to remember that 2009 was just an awful year because of injuries and that Upton physically couldn't hit for much power in 2008 because his shoulder was bothering him. BJ himself said,

"If I could swing the way I wanted to, there would be less doubles and more homers," Upton said. "A lot of my doubles have been off the wall or they one-hop the wall. If I could have really put a full swing into it, I think the story would be a little different."

Unfortunately, it is nearly impossible to conclude why BJ Upton wasn't hitting the ball with authority against LHP in 2011. Is it possible that a look at his strikeout and walk rates could point towards an obvious conclusion? 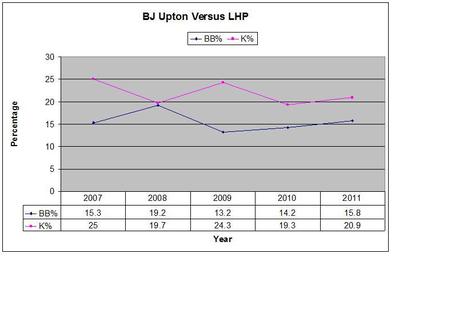 The chart displays several interesting points. In 2011, Upton's strikeout and walk rates versus lefties didn't catapult like his ISO did. Instead, they remained near par with 2010, the year in which he excelled versus lefties. This is definitely a positive sign, as his 2011 versus lefties looks like it was just an off year and thus very fluky. With this in mind, I believe it is fair to conclude that BJ Upton should return to form against lefties next year and bat well against them because while his ISO declined severely, he maintained his BB% and his K%.

Having now explored Upton's season against LHP, let's switch gears: Can Upton repeat his 2007 year? Given his incredibly high BABIP in 2007, it seems impossible. However, the next two graphs add an interesting twist... 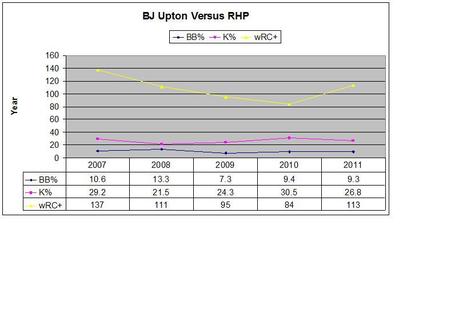 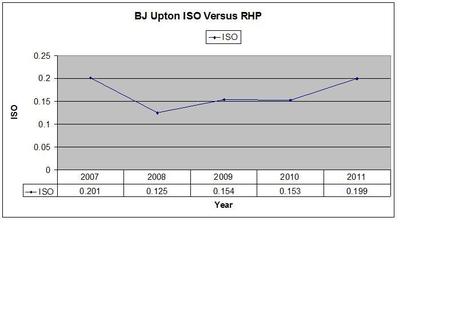 So what to be make of this? If Upton returns to form against LHP and hits RHP in a similar fashion as his 2011 numbers, he could be in for his best year yet. In fact, if he performs to those levels (let's say 140 wRC+ versus LHP and 112 wRC+ versus RHP), his wRC+ should be around 123. With Upton's defense and baserunning, that makes him a 5.2 or so WAR player, a top 25 player in all of major league baseball!

And here is the Cliff Notes section, since my thoughts were extremely sporadic and difficult to follow....

1. BJ Upton's wRC+ was poor against lefties last year, but it appears he should return to form next year. His power (ISO) appears to be the main culprit, and since there was no injury, it seems like it wasa one year occurence.

2. BJ Upton improved against RHP last year. These gains were evident in every offensive catergory listed.

3. If BJ Upton returns to form against lefties and maintains his hitting against RHP, he should have his best year yet.

4. It is extremely unlikely Upton will ever hit the way he did in 2007. Even with the improved numbers versus right handed pitchers, his overall numbers don't compare to 2007's.

4. BJ Upton is a crazy player to understand. He goes through hot and cold streaks, he can't seem to decide whether he is going to hit better at home or on the road, his baserunning is up and down, etc...... Because of these things, I would bet against Upton having a 5 WAR year next year. On paper it makes perfect sense, but Upton isn't a player to perform in a sensible manner. It would just be un-Upton like. Which would be normal, just not normal for BJ (confused?).

I'd like to take a quick moment to thank Steve for letting me become a writer here at DRaysBay. I plan to focus on everything from statistical analysis to minor league reports (and everything in between). Once again, I'd like to give Steve a big thanks!