Why the Rays want Fernando Rodney

Share All sharing options for: Why the Rays want Fernando Rodney

Fernando Rodney is a mediocre pitcher. That's been covered pretty well at this point. But I wouldn't be surprised if he's the guy Hickey is most excited about coming into camp. I've been a Rodney fan for awhile (always preferred him to Zumaya in Detroit), and I think he's one of the pitchers in all of MLB most obviously asking to be "fixed."

Here are Rodney's pitches from last year. He throws good hard four and two seam fastballs, a slider (which 2011 MLBAM pitch classifications often mistakenly called a changeup -- I've tweaked them for the rest of the article, but I include it here as a warning to anyone looking at Rodney's pitch f/x linear weights on Fangraphs), and a changeup.

Now there is more to a changeup than just movement. Arm speed and slot are important too, if you're going to make it look like your fastball. But in terms of movement, Rodney's changeup is vicious. In fact, on a staff full of changeup artists, it immediately becomes the most sick changeup on the team (I'm assuming Alex Torres goes to Durham). If you like seeing Shield's changeup fall of the table, you'll like Rodney.

Below is a comparison of all the Rays' changeup artists. All data from Joe Lefkowitz. 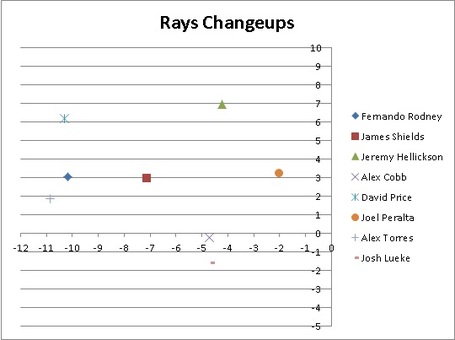 I've reversed the lefties (Price and Torres) for easier comparison. Cobb's and Lueke's sinking pitches are usually called splitters. Same with Peralta. The combination of sink and run that Rodney (and Torres) can muster is pretty unique.

Oh, and when batters did manage to put Rodney's changeup in play, they only had a .250 BABIP.

Jason pointed out in an email chain yesterday that Rodney went away from his changeup once he got behind in the count. I have no idea why. It's by far his most effective pitch, and it's the pitch with which he's most able to get a strike. Given proper balance, game theory tells us that all of a pitcher's pitches should be equally effective, and that if one pitch is way more effective than another, you should use it way more than you currently do. How does HIckey think he can fix Rodney? I think this one is pretty easy.