Twelve hours of playoff baseball saw two blowouts in the National League, and two walk off wins in the American League.

Bryce Harper donned red contact lenses in lieu of sunglasses to effectively scare the crap out of everyone. His hair was dyed black and blue, he was battling strep throat, and he was making no excuses - going 0-for-5. 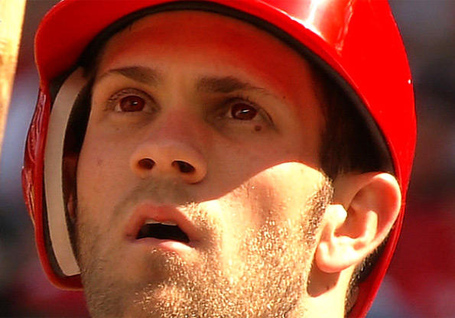 Edwin Jackson was wildly ineffective against the Cardinals with 5.0 IP, 8 H, 4 K, 4 ER - adding frustration for every Nationals fan confused over Strasburg's arbitrary benching at the end of the season. Stras had only faced the Caridnals once in his career, seven innings pitched with nine strikeouts.

With the Nationals down 4-0, Adam LaRoche worked a stellar at bat against Chris Carpenter to walk the bases loaded in the bottom of the fifth with two outs. Unfortunately, Michael Morse hit an easy fly ball to center, and there went the ball game.

Side Note 1: In the following inning, with two men on and none out, Daniel Delasco hit a sac fly to score another run for St. Louis. The following two hitters were the short stop Kozma and then Carpenter. Manager Mike Metheny's plan had been to fool the Nationals into walking Kozma to try for a double play, and the bait was Skip Schumacher in the on-deck circle and a relief pitcher warming up in the bullpen. The Nats pitched to Kozma anyway for a strike out, and then Metheny sent up Carpenter to receive a strikeout as well.

So I must ask, why not send Schumacher to the plate? Surely that extra run standing on third would have been worth more than sending Carpenter back to the mound during a sub-par performance. Regardless, he stayed in the game, used 19 pitches to record two more outs, and then was pulled. It's the playoffs, why take those chances?

At this point the shadows had crossed halfway between the mound and home plate providing ample distraction for the hitters, so much so that the umpire (Joe West) was reportedly complaining to the ball boy he could barely see the ball - according to the TBS broadcast.

The Cardinals won 8-0 in a blowout, and let's all blame the benching of Stephen Strasburg. St. Louis leads 2-1.

Angel Pagan welcomed Mike Leake to the post season with a lead off home run. Leake was chosen to spot start over Mat Latos, who needed one more day of rest after he covered for the injured Johnny Cueto in game one.

The Reds responded by loading the bases and walking in a run against Barry Zito with two outs. Dioner Navarro then promptly struck out to end the inning, losing the Giant's best chance at a multi-run inning.

Navarro was an early August call up for the Reds, having found his BABIP in AAA (.321, compared to .210 last year), doubled his line drive production, and hit for .319 in the minors. He ended the second inning on a stellar throw to second to catch Pagan stealing off a difficult pitch. Other than that, the former Rays All-Star was not a factor.

Barry Zito would get chased by the third inning, and with a play off game in the balance, Bruce Bochy gave the ball to... Tim Lincecum! The Freak was available after throwing 25 pitches in relief in game one, and he did really well: 4.1 IP, 2 H, 1 R, 0 BB, 6 K.

Also, Kung Fu Panda ate his wheaties before this game.

The Giants ran away with this one 8-3, tying the series 2-2. Matt Cain will face Mat Latos in Game 5.

Joe Girardi chose to continue batting Alex Rodriguez third despite his 1-for-9 performance in the first two games. I don't have an issue with Girardi leaving A-Rod in his lineup slot. I do, however, find it interesting to bat A-Rod ahead of Rabinson Cano, Nick Swisher, Mark Teixeira, or Curtis Freaking Granderson.

Side note 2: Curtis Granderson hit a meager .204 average after his demotion in the batting order. He was dropped after the acquisition of Ichiro Suzuki, who batted .362 in those 67 regular season games to finish the season. Could it be that removing Granderson simply hurt his confidence but not his talent? The star center fielder was still able to reach 41 home runs while batting seventh. Why demote the Grandy Man, and not A-Rod?

This game was the Orioles to lose, and lose they did. After going 0-for-3 with two strikeouts, A-Rod was pulled for Raul Ibanez with two outs, down one run in the ninth. Ibanez promptly hit a home run off closer Jim Johnson to tie the game,

and then he hit another solo homer in the 12th inning for the walk-off win.

Let the record show: A-Rod is not that good anymore. But please, Yankees, keep batting him third. Give the O's as much of an advantage possible. The Yankees won 3-2, and New York leads the series 2-1.

We should expect nothing less from the Athletics. With the A's down 3-1 in the ninth:

The video is addicting to watch:

The only homerun on the night came from Prince Fielder, while Miguel Cabrera was 1-for-4 and no runs batted in. WHERE YOU AT, MVP?

Rookie Jarrod Parker will take the mound against Justin Verlander tonight in Game 5.