Wade Davis has stated his heart is in the starting rotation, but after looking at the body work Davis produced this season, Andrew Friedman has a tough decision to make for 2013 with the talented hurler.

Wade Davis made his feelings known to the pool of beat writers in February as he reported to camp knowing he would be battling for a spot in the rotation with Jeff Niemann.

"I'm a starter," he said. "I don't see any reason for me to be in the bullpen. I understand they've got to do certain things, but we'll see. … I definitely want to be a starter and stay a starter forever. And that'll be my mentality."

Davis did not even dismiss asking for a trade when Marc Topkin of the Tampa Bay Times pressed him for details. After all, Davis had never made a relief appearance in his entire professional career as he had started all 202 games he had pitched in since joining the organization in 2004.

Davis eventually did "lose" the battle to Niemann but his attitude changed during camp as he made a rather insightful concession speech to the Tampa Bay Times' Joe Smith:

"I'm good; it'll be a good experience," Davis said. "It's not a demotion. We're still all going for the same thing, to get to the World Series as a team. Individualizing yourself and taking it personally would be stupid, and selfish."

Davis sold himself short as he turned the good experience into great outcomes as he became an integral part of the bullpen's success while turning a lot of heads as he first did in 2009 after his promotion to the major leagues.

His DRaysBay staff report card came out as:

The most notable change to Davis in 2012 was his velocity. His velocity charts at Fangraphs show where his velocity has been throughout his career and how it got stronger as the 2012 season got longer to the point he was working with some of the best average velocity of his career. In fact, Davis threw all of his pitches with more velocity in 2012 than in previous seasons: 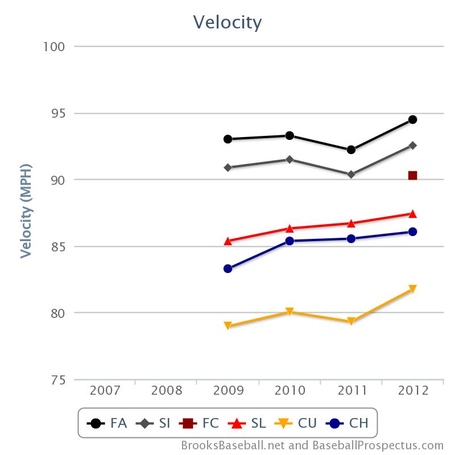 A disturbing trend in Davis's numbers heading into 2012 was his declining dominance. Most recall his first appearance for the team in 2009 in which he struck out six of the first seven Detroit Tigers he faced sandwiched around a long home run by Aubrey Huff but that slowly faded throughout the following two seasons. Hitters made more contact with Davis's pitches each season as the hurler struggled to put batters away as he lacked an effective third pitch. The struggles came to a head in 2011 as Davis struck out just 13 percent of the batters he faced; four percentage points below the American League average for starting pitchers.

The move to the bullpen allowed Davis to scrap his ineffective changeup and focus on his fastball, curve, and improving the cut fastball he had been working on in previous seasons. The power approach combined with the increased velocity in shorter appearances led to a dramatic change of outcomes for Davis. Three of his four pitches had positive value on a per 100 pitch basis according to FanGraphs: 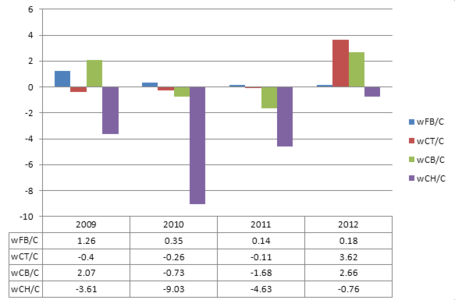 As a result, Davis struck out 31 percent of the batters he faced in 2012, which was even greater than what Fernando Rodney accomplished in his record-setting season.

Davis generated more swings and misses on all of his pitches, but saw the most improvement from his cutter: 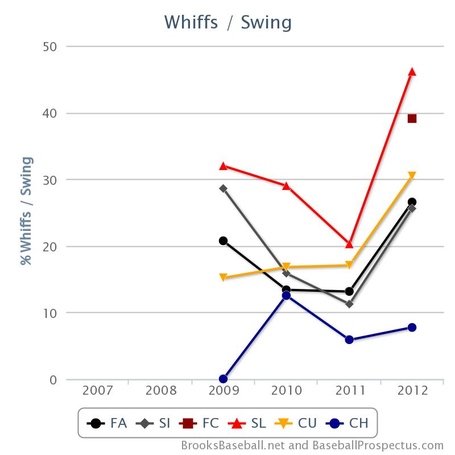 The experience in the bullpen allowed Davis to find a third pitch in that cutter, a discovery that actually began late in 2011. Davis is quoted at TBO.com as saying that he learned the pitch from Dick Bosman back in 2005, but did not get committed to it until later in 2011:

When you don't get swings on (a pitch), then it becomes a non-factor in the game, and my slider was a non-factor," Davis said. "It was diving too quick and no one was swinging at it, and it was a ball every time. … That was the whole process behind the cutter, keep it in the zone and get some swings."

The addition of an effective third pitch makes the decision for 2013 more difficult as Davis played the role of a team player and gave up his own desires for the betterment and did so admirably. He was able to both help the team as a reliever and help improve his own career by adding a more effective third pitch to his arsenal.

His role, and even his team, for 2013 may be up in the air, but all involved must have greater confidence in what the future has in store for Wade Davis after watching him embrace the bullpen experience as he did this season.