Share All sharing options for: Silver Linings in the John Farrell Trade

In 2003 the Boston Red Sox interviewed a former catcher with an extremely organized and analytical mind. He was well prepared and had a detailed plan for success. He knew exactly what he wanted in a coaching staff and pitching rotation, and had a great personality. They liked him, but he didn't have enough experience as a manager.

Instead of hiring Joe Maddon, the 2003 Red Sox hired a manager who had more experience. His team never won more than 77 games, but hey - at least he had experience. That man was Terry Francona, and he inherited a baseball team that was one trade away from Curt Schilling and otherwise stacked with talent. Like Maddon, he had a mind for sabermetrics after spending two years in the Cleveland Indians' front office.

In 2012, the Red Sox were faced with a similar problem. A bright former catcher who blew leadership away with an incredible interview. He had an extremely detailed plan and vision for success. He worked well with front offices and players alike. Even the media was blown away by his interview, prompting the Boston Globe to publish an article detailing the reasons that Brad Ausmus was the only correct choice. Ausmus even draws comparison to Francona, having spent the last two years in the front office of the Padres - a team that's also known for extensive sabermetric use (full list). Except there's one problem. Like Joe Maddon, Ausmus lacks significant managing experience.

Instead, the Red Sox reached out to their former pitching coach, John Farrell, who spent four years with the team and was already acclimated to the players. You know, so he can keep these professional athletes under control command respect in the club house. On the upside, Farrell already knows the management, the media, and the process behind the scenes at Fenway. He had spent four years in the Indians front office (coinciding with Francona's two), and he has two years of experience managing a team in the AL East - leading the Blue Jays to 81 and 73 wins (the downside).

To gain John Farrell, the 2013 Red Sox had to trade their starting short stop Mike Aviles - .288 wOBA, 1.8 WAR last season. When the Sox lost Theo Epstein to the Cubs, they received quite a different level of talent than what was just given away: a relief pitcher called "The Other Chris Carpenter." Giving up a two-win defensive shortstop may be prompting some to say, "you're doing it wrong," but before we jump to conclusions, the PTBNL from Toronto is minor league closer David Carpenter, who notched 60 K in 60 IP and one save in the majors last year. Not the worst haul for the Red Sox, who have plenty of openings in the bullpen.

The acquisition of this Carpenter is a glaring reminder that the new manager won't have Theo Epstein backing him up, but a general manager who, in his first year, turned a 100 mph hurling closer into a failure of a starting pitcher, traded Jed Lowrie and Josh Reddick for two relief pitchers who crumbled, and dumped half of his All-Star roster to save money and clean house of bad vibes. Ferrell will inherit a Red Sox team that is not one win away from the World Series, but likely below .500. A team whose unofficial captain recently called him the wrong choice to manage in Boston.

Boston's Risks Are Our Reward

The Red Sox skipping Joe Maddon in their managerial search will always be one of the greatest "what if's" in recent history, but Francona proved to be a worthy choice. Brad Ausmus seemed to be the best of both men and cost less, but with extra risk for Rays fans: Ausmus is a close friend of Jim Hickey - aka one-third of the Rays trinity - who worked closely with Ausmus while pitching coach of the World Series winning Astros. An Ausmus hire could have lured away one of our team's greatest assets. 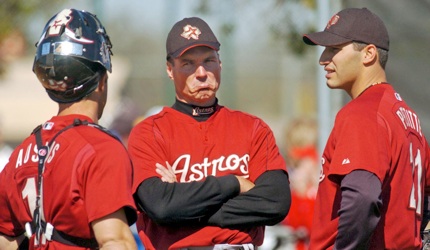 I don't mean to make Jim Hickey sound like a flight risk, but the possibility that Hickey could ever leave should be a consideration. Alas for Boston fans, Ben Cherington has put his neck on the line by following his gut and trading for Farrell. The vicious bean-town media did not seem to be on the Red Sox side of this trade, but I'll give that a day. It's worth mentioning that once Cherington made his decision, it was the ownership in Toronto and Boston that made the trade happen, much to the dismay of Blue Jays GM Alex Anthopolous.

So for those scoring at home, Toronto is upset, and Boston passed on Ausmus. It may or may not be the right call for the Red Sox, but it is great news for Rays fans.

Side Note: St. Louis better look after Matt Carpenter. He might be next.