Over the past several seasons, Shields has cemented his status as an established and respectable pitcher in the Rays' rotation. There will always be pitchers with superior stuff, but few can match his competitive drive and durability. A member of the rotation for the past seven years, Shields is admired for his steady performance, consistently rewarding the Rays with 200+ innings of quality pitching. A glance at Shield's WAR totals from the past several years confirms his reputation as consistent. His season WAR totals from 2007-2012 are as follows: 4.5, 4.1, 3.7, 2.0, 4.9, and 4.3.

Those are not the single season numbers of a true ace, but they are certainly valuable, especially considering Shield's price tag. 2010 stands out as an anomaly compared with the rest of his season performances.

After performing strongly in April, Shields encountered struggles in June, July, and August. His collective ERA during those three months was 4.53, far worse than our expectations from the Rays' second starter. With the Rays in a dire need for bats, they considered moving Shields at the trading deadline. However, presumably not finding an enticing or suitable deal, the Rays held onto Shields, a move that turned out very favorably.

In Shields first start after the trading deadline, he pitched a complete game shutout in Oakland. Post-deadline Shields pitched 89.1 innings with a 2.16 ERA, a 3.06 FIP, and an 89/14 strikeout to walk rate. Needless to say, Shields was dominant down the stretch, helping the Rays push for a wild card.

His DRaysBay staff report card came out as:

Overall, it was certainly an interesting year for Shields in terms of his pitch sequencing and results. During the first few months of the year, Shields was ineffectively hurling more cutters, fewer curveballs (which weren't good anyway), and less changeups than in his successful 2011 campaign. By the time the season came to a close, Shields' pitch selection and stuff barely resembled the same Shields who struggled in the early and middle portions of the season. Unsuccessful and tentative pitching miraculously transformed into effective power pitching. 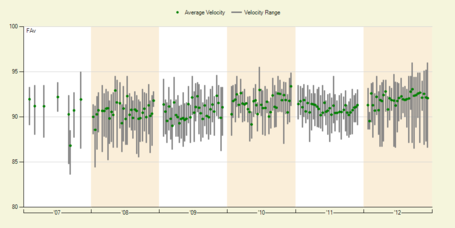 Notice how Shields' velocity range climbed during his later starts in the year. His fastball went from 88-93 to the 91-96 range (Unfortunately, the chart above mistakes many of his changeups for fastballs, since his changeup moved from the low-80's to the mid to high 90s). Batters now were swinging and missing at his fastball, and it became a usable weapon.

By the end of the year, Shields had transformed into a power pitcher. The power pitching James featured a fastball that sat at 92-96, a changeup from 86-88, and a curveball in the 78-82 range. His changeup an curveball remained as good as ever, and his fastball generated weak swings. In his final start of the year when he struck out 15 Orioles in a complete game, Shields reached 95 mph or higher on his fastball or cutter 21 times.

After witnessing Shield's final start, I began to think about pitchers with a similar arsenal to his. Skimming through fangraphs, only several pitchers featured arsenals similar to James in terms of fastball, curveball, and changeup velocity.

(These are just some comparables)

Obviously, the quality of a pitch extends far beyond its velocity. The purpose of showing these similar pitchers, in terms of velocity, is not to say Shields is a similar pitcher so much as to show the type of pitchers who have similar velocity ranges. All of the five other pitchers are known for possessing formidable arsenals, so it is nice to see Shields appear on the list with them.

What we saw from Shields in 2012 was just another example of how he has evolved and adapted in order to achieve success. After getting pounded with his fastball in 2010 and surrendering 34 home runs, Shields cut his fastball usage down to 36% in 2011. This year, he responded to his early season struggles by cutting back his cutter usage and establishing his fastball, which registered at much higher velocity rates as the season progressed, whether by design or not.

Simply put, major league hitters are good enough to adjust to a pitcher's strategy. In order to succeed, a pitcher must be both good and able to adjust. Just as we have seen Price develop, harness, and mix up his pitches, so too have we seen Shields fine-tune his pitching.

All info per Brooks Baseball.

Looking forward to 2013, the Rays should expect over 200 quality innings from Shields, good for four to five wins above replacement. But just like in years past, the way in which Shields accumulates the stats should be more interesting and entertaining than the repetitive consistency of his numbers suggests. In order for most pitchers to be successful, they must learn to adjust; consistency comes with change.