The Rays were predicted by many to make the post-season, some to win the American League, and even one or two to win the World Series. Obviously, none of that happened. Fingers can be pointed at Longoria's hamstring, free agent hitters, lack of trades, or underperformances by key players. Rather than furthering the game of what could have been, let's look at how players performed against their pre-season projections.

It is safe to assume that most of us are not in the mood to read much today, so this will be kept to a couple of visuals to help spark discussion.

I gathered the ZiPS projections from Fangraphs for all hitters and pitchers that saw 50 or more plate appearances or 20 innings pitched and compared those projections to each player's final wOBA or ERA. According to the Fangraphs Library (nice work, Slowinski), ZiPS "uses weighted averages of four years of data, regresses pitcher based on DIPS theory and BABIP rates, and adjusts for aging by looking at similar players and their aging trends."

Here are two separate graphs showing how each group performed against projected expectations in 2012: 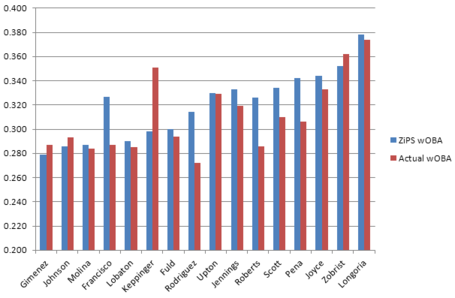 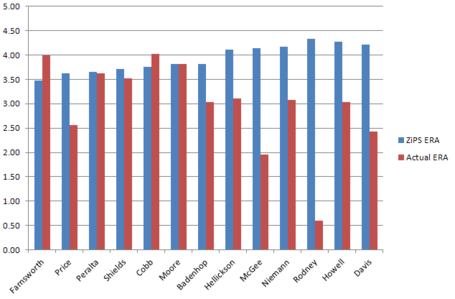 The hitting side graph shows that Jeff Keppinger was truly the only overachiever on the offense while Ben Zobrist was the only primary hitter who exceeded his projections. Meanwhile, both Carlos Pena and Sean Rodriguez underperformed at a rate comparable to Keppinger.

The pitching highlights the success of the team as four of the six starting pitchers exceeded projections while Matt Moore nailed his 3.81 ZiPS ERA to the dot. Kyle Farnsworth and Alex Cobb were the only pitchers to fail to reach their projections but each were coming off injuries that ended their 2011 seasons.