The Rays off-season targets will depend in large part on how much budget room they have for 2013. But with current shifts in the market, how much space do they have?

Share All sharing options for: What will the Rays payroll be in 2013?

In some years, it's been relatively easy to guess at the Tampa Bay Rays plan for the offseason. The Matt Garza trade came as no surprise back in 2011. We all knew that the Rays were looking to add a first baseman and DH last year. While we may miss on the exact players that the Rays acquire in the end, their general offseason "To Do" lists have never been too hard to guess at.

This year, we know that the Rays need to add offense -- again, a first baseman and DH, and possibly an outfielder as well -- and it's increasingly likely that they'll trade one of their starting pitchers to do it. But which pitcher will they trade? Will they opt for cost-savings, or will they try to keep their studs?

We've already spent a lot of time debating which pitcher the Rays may trade, but there's one side of this question that hasn't gotten much attention yet: the economic one. The Rays do have a constrained budget, so how much room do they currently have? Rumors have suggested that the Rays are interested in acquiring Justin Upton, but is there actually room in the budget for them to do so? 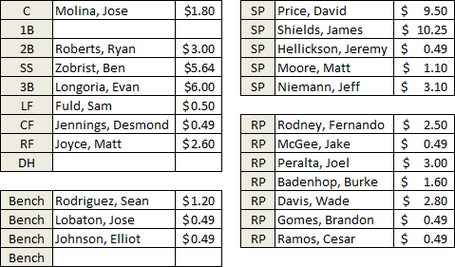 *Salaries taken from Cot's Contracts.
**For players eligible for arbitration, I plugged in the salaries projected by Matt Swartz at MLBTR.

So the question remains: what will the Rays do with their payroll in 2013? Will they continue to fall within their historical range? If so, that'd suggest the Rays will need to trade James Shields or David Price, as they're almost at budget as it is anyway. In fact, if the Rays were serious about acquiring Justin Upton and his $9 million salary, they'd have to trade Shields or Price in the process...that is, unless they were willing to push their payroll to record heights.

And that's where things get fuzzy. The Rays could decide to operate this offseason under slightly different conditions than they have in the past. While nothing has changed in their bottom line, they will start receiving an extra $25 million in national television revenue in 2014. Baseball's economy is starting to shift as a result of this influx of money, and player's contracts will likely inflate over the next few years.

In other words, the Rays might decide to push their payroll slightly higher in 2013 than their budget would normally allow, if it would put them in a more competitive position in the new financial landscape of 2014. Maybe holding onto Shields and Price would be unreasonable under their current budget considerations, but at $12 million, they might be considered bargains in just a year.

Which way will the Rays go? If I had to guess, I'd bet that they'd continue to operate similar to how they have in the past. They might push the payroll a little higher than normal -- maybe cracking the $70 million boundary for the second time ever -- but if they do trade one of their pitchers, it will be for cost-controlled offensive players that will help them maintain a sustainable payroll for the foreseeable future. It's nothing radical, but when you're the Rays, you can't afford to be.